Here’s the issue, it started a few weeks ago, first when I was signing-in, I would type my password and I would get a message saying that I had entered the wrong password, but I knew it was the good one. I would type it again and my session was opening.

A few days ago, I noticed that the “Reveal Password” icon was not in the sign-in zone. I made a few research and finally found out that the key “CredUI” was missing !
So I created the missing key with the its value “DisablePasswordReveal” D_WORD set at 0 , at this location : HKEY_LOCAL_MACHINE\SOFTWARE\Policies\Microsoft\Windows\CredUI
After creating it, I was able to see what was happening when I was typing my password, and it is very weird !
As I hit the third character of my password this sign « ` » appears before the first character already typed !

I modified the password three times, making sure I was not using the same letter as the third one in the previous password, but the issue remains.
I created a new account, and it would do the same thing.
The fast start-up is not activated because my laptop is equipped with a SSD.
If I stop or reboot the laptop, I can’t sign-in on the first try, at the second try, I type the exact same password and it works, the sign « ` » doesn’t appear before the first letter of the password.
If I wake up the laptop from sleep, I must sign-in and there’s no issue typing the password.

So, I switched from a password to a PIN code using letters and characters, and there’s no issue at all !
I went back to a password and the issue is back !

I ran DISM, sfc /scannow and everything is OK ! But it’s not ! 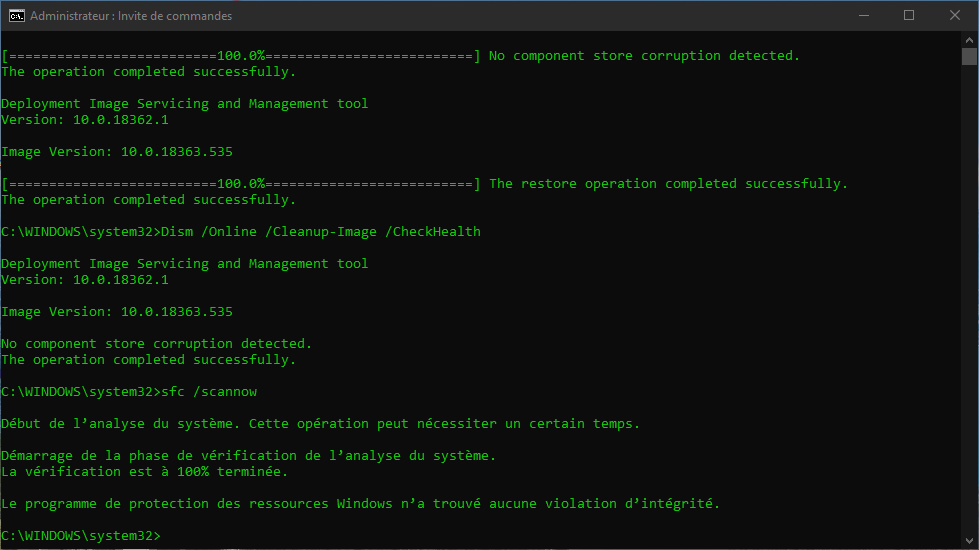 I would like to know if there’s a way to fix this issue because I don’t know how long the PIN code will be working ???

I checked if this was an issue with the keyboard by typing something in Notepad, in Microsoft Office 2019, and here, and there’s no issue at all !???

As for now, I’m using a PIN code which includes letters and characters.

I ran DISM, sfc /scannow and everything is OK ! But it’s not !
Click to expand...

tht only checks system files not the rest of the files.
The last know good fix for that (That i have found works.) 1.) reset and login as Local Account not MS Account. --> leave the local account pass blank.) (2.) reboot 2 times as Local Account (3.) in search search for ADK Insider. that will take you to MS where it then ask for you to signin with your MS Account. (4.) signin with MS Account and Pass. then you can (5). reset signin as MS Account and Pass.
So far that has never failed for me or my Clients... It makes no diff if you want ADK or not. What you are Actually doing is a different MS Area where you have to have a MS Account. "This Issue has been explained to me as a "Cache Issue at MS" whee as you can clean and set the proper doing as i outlined above... Hope this Helps.

I forgot to mention that I am using a local account.

I connected with a MS account, rebooted, then went back to a local account and left it blank, rebooted twice, then as I created the new password, this time, as I hit the third key four dots appear instead of three, I checked, and the same sign is back before the first letter !

This OS is driving me crazy !

Windows 10 is a constant "WTH" and also "Use with Caution". I started using a auto login. so far it has no issues.
Make sure the 2 passwords are not the same... and you might clean/clear the cache.

This weird issue only happens when I sign-in or create a new password for a local account !???

But, like I said earlier, no issue with a PIN code !

I went through it all again and the issue remains !???

Thank You Snuffy , may be somebody will have another suggestion ???

Ask several others, so far we can not duplicate this issue... suggestions were.
1. do a total Reset of Passwords - - https://support.microsoft.com/en-us/help/4028457/windows-10-reset-your-local-account-password
another was clean the cache (depends on your system and browers being used...)
2.
If you checked the option to remember your credentials, Windows will store your passwords for the next connection.
3. Do a Full scan for any corruption, I recommend to all my Clients
This is used to fix almost any and all issues.


Snuffy said:
If you checked the option to remember your credentials, Windows will store your passwords for the next connection.

Which one should I remove ??? 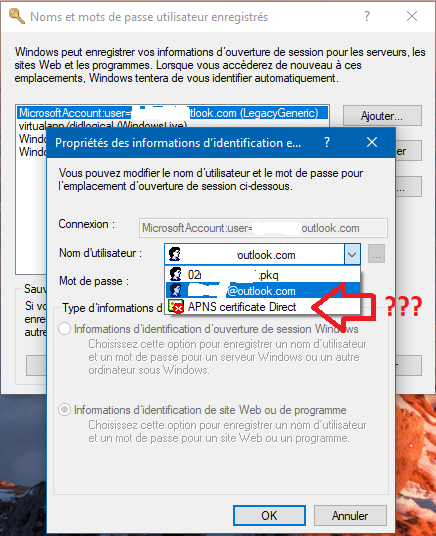 Is it normal the one with the « x » in the red circle (APNS certificate Direct) ???

It’s the same thing if I look into the three other ones.

Thank You for your help ! Much appreciated !

I would remove all . and APNS Certificate Direct
Apple Push Notification Service (commonly referred to as Apple Notification Service or APNS) is a platform service created by Apple Inc. that enables third party application developers to send push notifications to iOS users. You must have Paid Apple Developer account to create certificates.
-------------------
what you are showing is other on your network. since it says Microsoft Account --xxxxx, you have more than one account - so again I would remove all accounts...(make sure you know remember the passwords . then reboot. you will need then to redo all passwords... your chose to either SAVE or Not Save.

Snuffy said:
I would remove all . and APNS Certificate Direct
Click to expand...

You mean the three ones in the « Microsoft Account : user=xxxxxx (legacy generic) » ???

By deleting the APNS, it won’t cause a connection problem with iTunes (which came from the Windows Store) ?

Do I do something with the ones that are below the Microsoft Account ???

I'm not 100% sure on yours. but ea account (YOU SHOULD KNOW WHAT THEY ARE) I ADDED a pic of mine so you can see what they are.
If you remove them - and reboot, they should be GONE. and if you want to use which one again, you will need to re-enter that pass.
Ad 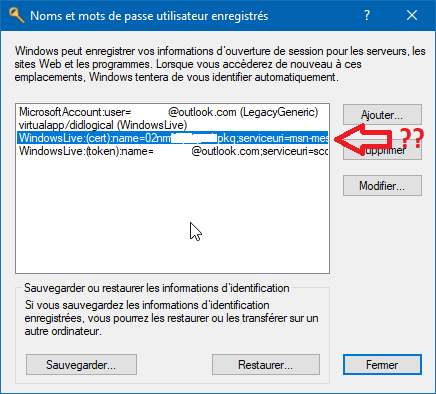 After comparing with your picture, I noticed that my Desktop is not in the list, is it normal ?

Your desktop is part of the logins, the desktop shown is my Network computer. and it depends on what all you have
1. I have 2 computer on network (so 2 Desktops) Main Desktop is Ryzen-3900x (not shown).
I have 2 different emails sets.
I have also 1 drive so you can see CQU7VDI is network computer
hotmail is main email also my main MS Account
outlook is #2 email also #2 login on this computer - i change as needed. (more than 1 MS Account.
onedrive is also shown
WindowsLive - hotmail is service for

ea system is different. and only you know what all you are attached to/with.
how many email servers, you use, one dire or not, itunes you say yes (I do not do).
now the passworks for the computer you are using are show differently. 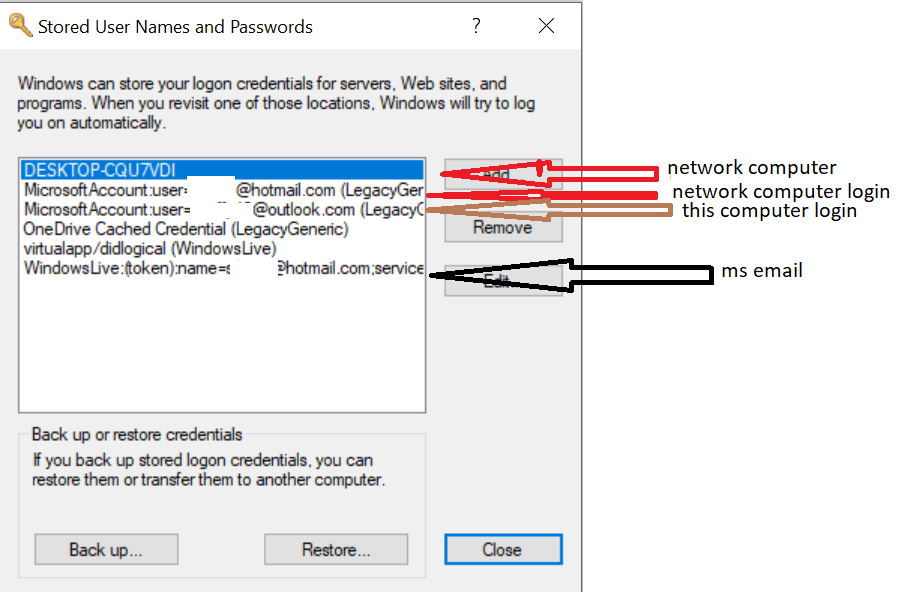 I account i use as general and the other is Admin where as I have more control. and like If you are not sure, then DELETE or REMOVE them all... then when you reboot you will/should be ask for a Login Pass since you removed them all....
Ad

Finally, I ran DISM, and the problem is still there as I create a new password !

So, it means that the problem is coming from the Microsoft’s cache !???

Since the PIN code has been working fine... so far, I’ll be using it, until it starts bugging like the password option, then I’ll switch to Linux !

I can’t mark the thread as solved because the issue remains.

Thank You for your help !

P.S.: If someone has any new idea to suggest, I’m all ears !