For those of you familiar with Scripting languages you are probably used to using alternate applications like Visual Studio when you want to create GUIs for your scripts.

There are a handful of other utilities for PowerShell too, which are a little cheaper to buy and still have the benefit of speeding up things like creating a GUI for your PowerShell script and Forms etcetera.

Rather than spending money and having to learn how to use an additional tool, if you do not mind a little extra finger work, you can code your own GUI and Forms in PowerShell, and if you want you can even make use of Extensible Application Markup Language (XAML) language, and a handful of similar templates to help speed things up.

Right now though, all that is more advanced, and beyond the focus of this introduction to creating a Form. Later, in other Tutorials I'll cover these advanced techniques, but for now let's get on with the basics.

As the [System.Windows.Forms] assembly is does not automatically load in PowerShell you need to add this assembly yourself by using the cmdlet Add-Type and the -AssemblyName parameter, then having done this create your new object.

Note: You can also load the assembly using the following command:


Code:
Let's take a look at the simpler (and easier to remember) method combined with a basic script:


Code:
If we open PowerShell or PowerShell ISE and run this basic script the following GUI form is generated:

Obviously, this form is of no practical use to us yet, but it is a platform we can use to start creating a more useful Form.

Take a look at the following code block:


Code:
We can add this to our original Script to add a description to our Form's Title bar, and also add a new dimension to the form: the Label object, which we can use to add some text into the form.

Starting to be a more useful form now, but for the fact the default font size is not too great for those of us who need glasses to read it, and do you actually like the font face, what if you want something a little different; perhaps to make the form a little nicer, or perhaps because a certain font face is easier to read for you.

Not a problem, we can continue building on our code by adding some additional commands. For example:


Code:
Now if we add this to our building block we get: 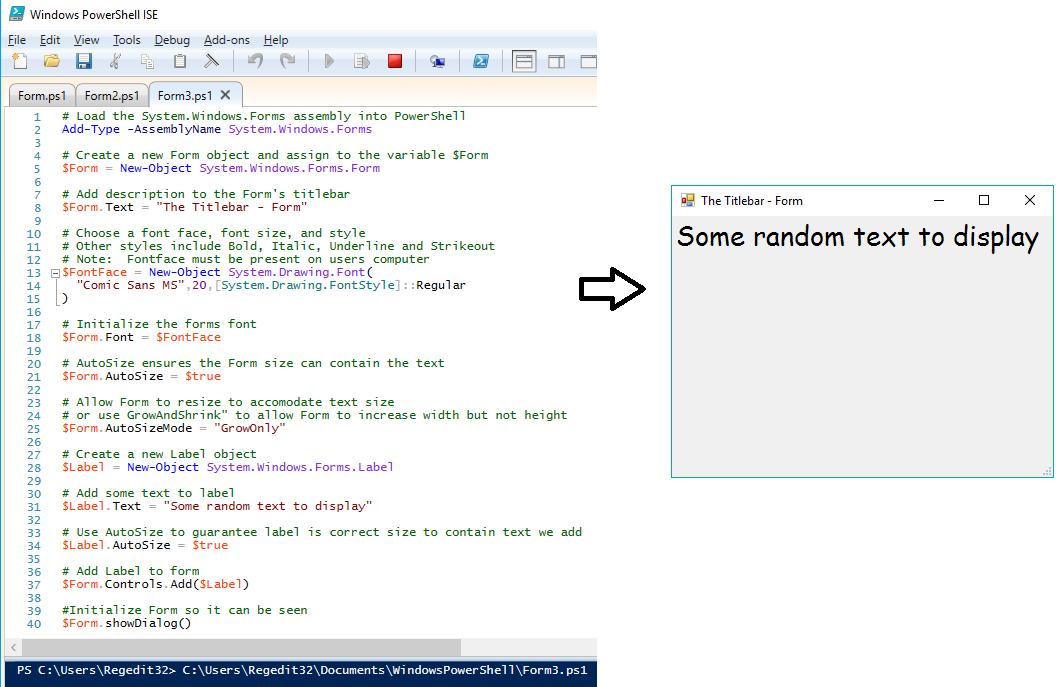 Apart from controlling these aspects of the Form, one can also take control of the Caption (i.e. Minimize, Maximize & Close buttons), as well as hide or show the SizeGrip which is what allows a user to adjust the size of the active window by dragging the bottom right corner. You can also control the opacity of the Form (i.e. whether you can see other windows beneath it and to what degree), and also determine what position on the Screen the Form will open to when activated. You can also control whether or not the activated Form will have an icon appear on the taskbar.

To achieve all this we'll need to continue building on our Script code by adding some additional blocks of code, like below:


Code:
When added to our script we get: 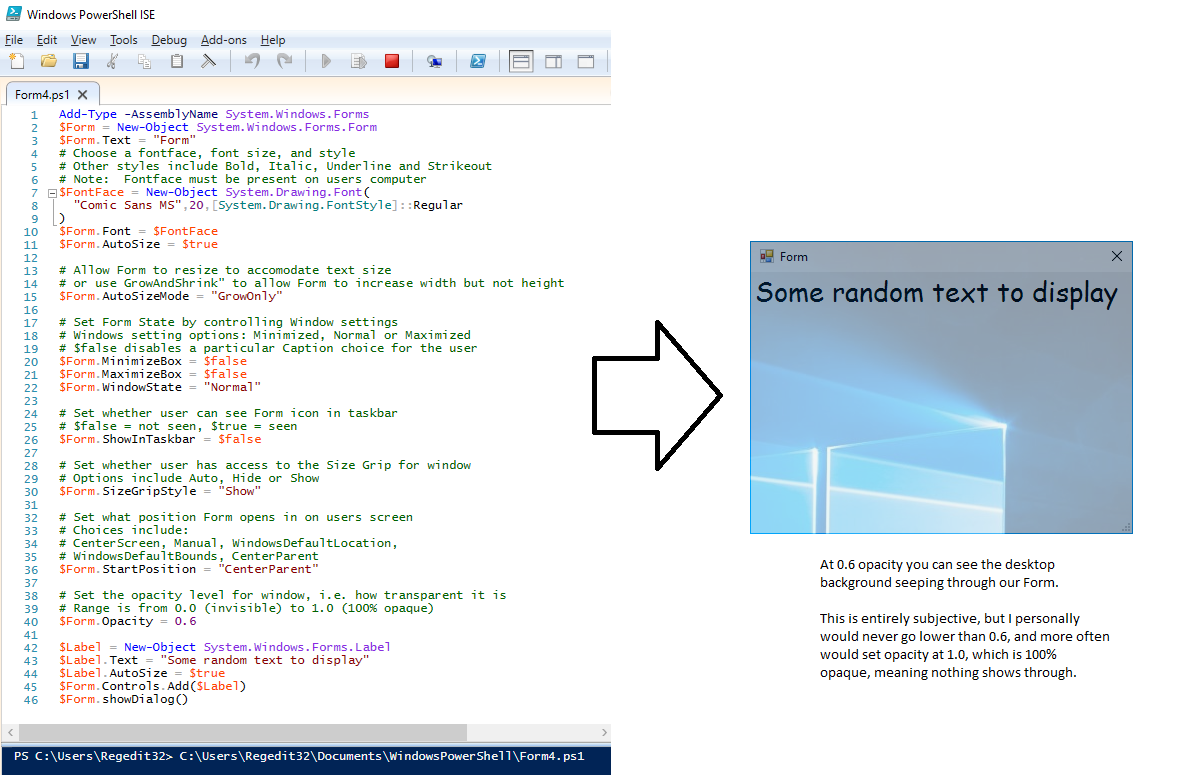 Now for the Form background itself. We can control this too and customize its look to our person preferences. Take a look at the following code snippet:


Code:
I won't be mean and ask you to guess the colour #FFFFABCD represents.

Now add this to our script and we get: 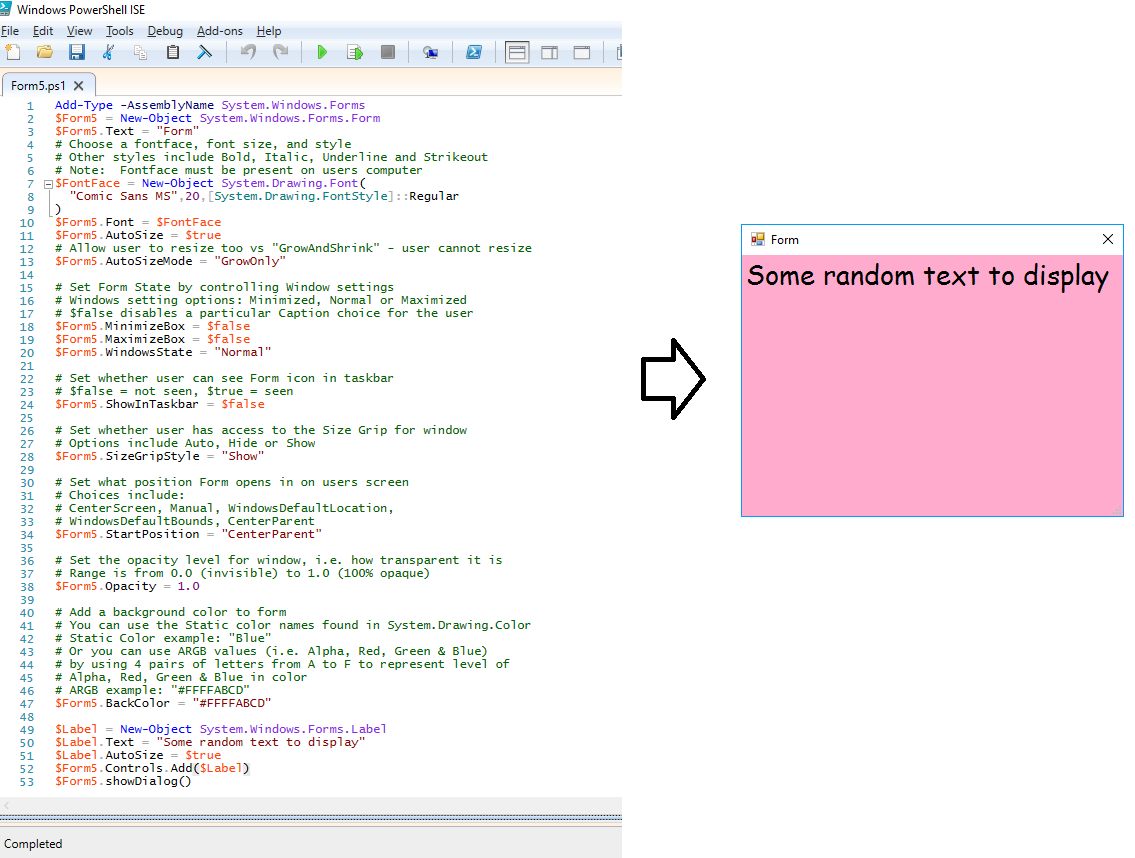 I won't go into it here, but suffice to say you could either convert this Script to an executable which you could place in your Startup folder, or create a new task to open the form at the desired time, and create your very own custom Sticky Notes.

Now you are not just stuck with pretty colours. Why not use a picture instead:


Code:
As you can see in the comments of this code block, there are a number of ways to manipulate an image and the form itself to help improve the final look of a Form should you choose to use a background image.
So after adjusting our script to include these details: 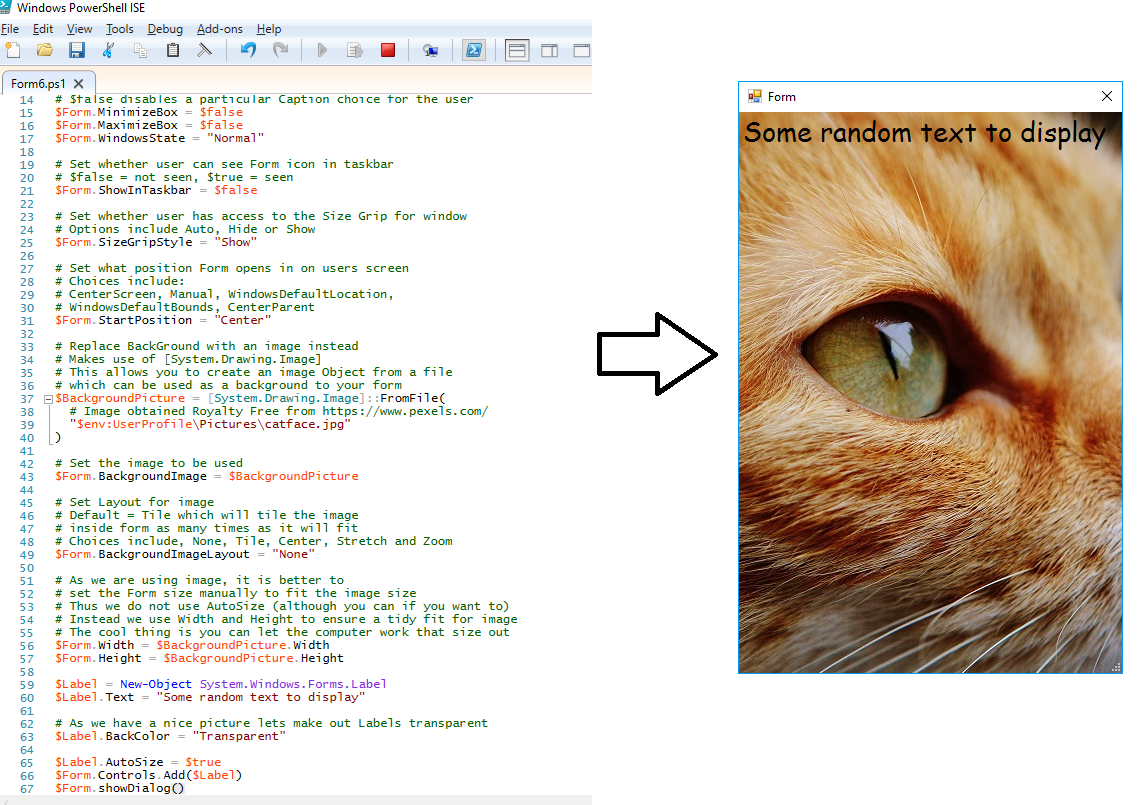 And if we did not make that Label transparent we'd see: 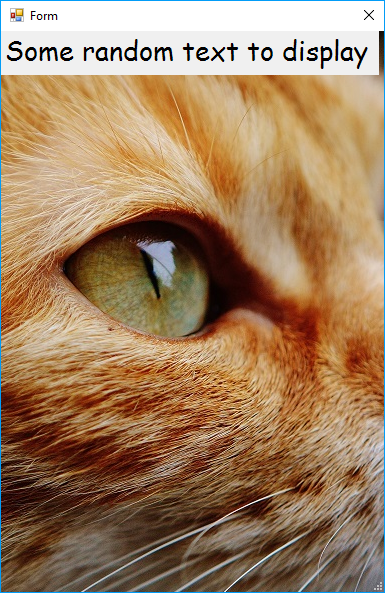 Not so nice with a non transparent label!

Well that concludes the introduction to creating your own GUI Forms in PowerShell.

In Part 2 of this tutorial I'll take a look at how we add buttons, interactive text fields, Lists and the ability to drag and drop items into our Form.