NET.Framework 4.7.2 was intalled but I can not find it in Apps & Features

Mine is showing in Program and Features and the Turn Windows features on or off. 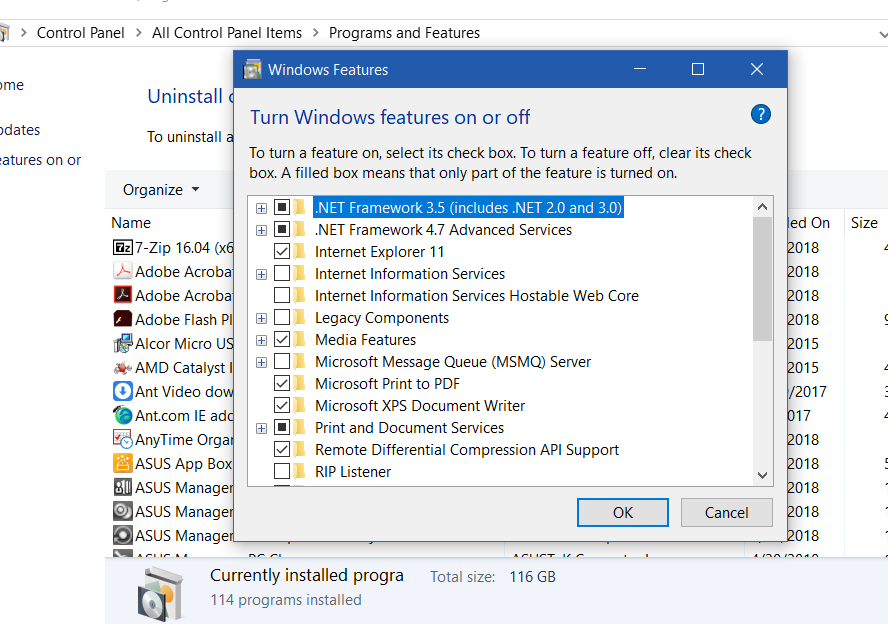 It may be possible to install a previous version if a particular program needs it, some versions encompass 2 or more versions such as 3.5 may also have 2.x.
A

I tried to turn off them but it didn't help. Also, I got some information that I can not delete the NET. Framework 4.7 and above versions as they embedded with the update. Moreover, I can not install the early version of NET. Framework 4.x if the latest one is installed. So, seems my issue is helpless... I can not roll back the Windows 10 April 2018 Update to fix my issue, as 10 days have already passed. I think the only way is restoring the windows. But still, looking forward to another way to fix the issue.

What program you installed is requiring a different version of .NET Framework? Most times the program provides it or gives a message about which version is needed.

Doing the Reset may not fix the problem, may have to do a clean install then install the older version of .NET. I don't routinely install .NET, wait until a program I'm installing calls for it, most times those programs won't complete installing until they have all the resources needed.
A

After I got the updates Windows 10, version1709 and windows 10 version 1803, FB Gameroom won't launch the apps, only black screen appears. I see the problem in the newest .NET version which comes with the updates. I could roll back several times whenever I got the Windows 10, version1709 update to fix the issue. But last time I got 2 updates one after another and I used Ccleaner to fix registry, because of this I could not roll back to the previous version of Windows. Many other users got the same issue as well after the update but they could fix it after uninstalling/reinstalling, restarting PC several times, just waiting for a couple days and etc. However, I tried everything but mine still does not work.
Last edited: Jul 15, 2018
Ad

I have not had any programs that needed the .net environment. Therefore I uninstalled it completely. Never had any issues without it...