How to Re partition SSD drive

I had a Samsung EVO 860 in my laptop which had Win10 on. Was partitioned as OS and recovery, now I moved to an external case and would like to use as one drive. Can this be done in Win10 management and if so how? And yes data on drive no longer needed.

Yes, open the system in the external and FORMAT the Drive. I prefer to use HDD-LLF

Just to add, if the SSD was used for an OS using the EUFI firmware interface to start the system, you might have an EFI system partition. I've found that this partition can't be erased or formatted using Windows disk management. I have used an old free copy of Easeus Partition Master, and it got rid of it easily, and then I was able to reformat.

PA-WOODCHUCK said:
Was partitioned as OS and recovery, now I moved to an external case and would like to use as one drive.
Click to expand...

That does indicate at least 2 partitions and one could use Disk Management to delete all then create a single partition followed by formatting. However, there may be a small partition or 2 that DM can't delete which may require another program to do it, as mentioned.

if I use HDD-LLF, then will I need to do a format? I'm a rookie at this. If I use DM how do I delete all and create a signal partition?

In the bottom portion of DM click on each partition and delete. Haven't used the mentioned program, some such programs can automatically format after creating partitions.
Ad

Caution: before you delete all partitions look at function in disk management. If listed as boot or MBR deleting will put you in a no boot condition.

Sounds like the OP wants to make a simple storage drive.

PA-WOODCHUCK said:
if I use HDD-LLF, then will I need to do a format? I'm a rookie at this. If I use DM how do I delete all and create a signal partition?
Click to expand...

yes, the program tells you after you do the LLF - to Format you drive so you can use it... Recommend Disk Management.
I use HHD_LLF to insure the drive is in like new condition. Then any Format will make it usable.

Bighorn said:
In the bottom portion of DM click on each partition and delete. Haven't used the mentioned program, some such programs can automatically format after creating partitions.
Click to expand...

HDD-LLF removes all partitions, and sets the Disk back to full unallocated. 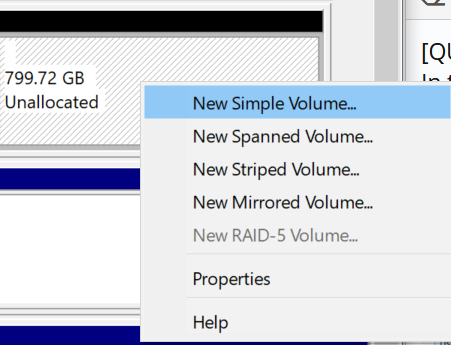 Got this reply from Samsung. I went with GPT when was asked in DM. Other choice was MBR which I presume is to make bootable?

MBR was first introduced with IBM PC DOS 2.0 in 1983. It’s called Master Boot Record because the MBR is a special boot sector located at the beginning of a drive. This sector contains a boot loader for the installed operating system and information about the drive’s logical partitions. The boot loader is a small bit of code that generally loads the larger boot loader from another partition on a drive. If you have Windows installed, the initial bits of the Windows boot loader reside here—that’s why you may have to repair your MBR if it’s overwritten and Windows won’t start. If you have Linux installed, the GRUB boot loader will typically be located in the MBR.


MBR does have its limitations. For starters, MBR only works with disks up to 2 TB in size. MBR also only supports up to four primary partitions—if you want more, you have to make one of your primary partitions an “extended partition” and create logical partitions inside it. This is a silly little hack and shouldn’t be necessary.

GPT stands for GUID Partition Table. It’s a new standard that’s gradually replacing MBR. It’s associated with UEFI, which replaces the clunky old BIOS with something more modern. GPT, in turn, replaces the clunky old MBR partitioning system with something more modern. It’s called GUID Partition Table because every partition on your drive has a “globally unique identifier,” or GUID—a random string so long that every GPT partition on earth likely has its own unique identifier.


GPT doesn’t suffer from MBR’s limits. GPT-based drives can be much larger, with size limits dependent on the operating system and its file systems. GPT also allows for a nearly unlimited number of partitions. Again, the limit here will be your operating system—Windows allows up to 128 partitions on a GPT drive, and you don’t have to create an extended partition to make them work.


On an MBR disk, the partitioning and boot data is stored in one place. If this data is overwritten or corrupted, you’re in trouble. In contrast, GPT stores multiple copies of this data across the disk, so it’s much more robust and can recover if the data is corrupted.

GPT also stores cyclic redundancy check (CRC) values to check that its data is intact. If the data is corrupted, GPT can notice the problem and attempt to recover the damaged data from another location on the disk. MBR had no way of knowing if its data was corrupted—you’d only see there was a problem when the boot process failed or your drive’s partitions vanished.

PA-WOODCHUCK said:
Got this reply from Samsung. I went with GPT when was asked in DM. Other choice was MBR which I presume is to make bootable?

This is the correct way to accomplish what you want to do. No other software to use and only takes a few seconds if you're a slow typer a minute or two. Just be sure you have a way of knowing exactly which disk to Clean Being a Samsung SSD if you don't have any other Samsung SSD that will be how you pick the drive to Clean. You'll see once you type in list disk. Don't do anything until your sure you have the correct drive/SSD
Ad

Only thing with Diskpart if you not familiar with it is easy as hell to select the wrong HHD/SSD and woops its all GONE.
too many other solutions that are much safer to offer to a Noob with no experience with Diskpart.