Windows 10 Pro 64 bit, Intel core i7-4790 CPU@3.60GH, 8 GB RAM
A few days ago two 500GB Transcend USB drives suddenly stopped showing up on "This PC."
The two drives also fail to appear on Disk Manager. They do however appear on Device Manager, devices and printers and "safely remove hardware" although there is no drive letter. (see photos.)
The drives had worked normally for a year or more and continue to work on an old Windows 7 laptop. In addition, the front USB ports that I normally use them on function correctly with smaller USB3 thumb drives and other devices such as cameras, scanners and printers. The two drives in question also do not work on any rear USB ports.
I have tried uninstalling and reinstalling the devices, updating device and USB drivers, checking suspend power options. Finally, I purchased a new 1 TB drive by a different manufacturer and it too will not function.
The drives are getting power as the lights come on and flash etc and, again, they worked perfectly before on the same ports.

This issue MAY be related to the update (KB4093112) which was installed about the same time that the issue appeared although I cannot be 100% certain. I deleted the update but it reinstalled itself. I used the "Hide Update" tool from MS, deleted again with internet off so as to avoid automatic reinstall but the drives still failed to function. I tried to "hide" the update again but received a message that there "no updates to hide". Update history (see below) appear to have been reinstalled.
4/16/2018 Cumulative update (KB4093112)
4/13/2018 Same as above
4/11/2018 Security Update for Adobe flash (KB4093112)
4/11/2018 Cumulative update (KB4093112)
Can anyone please offer some suggestions? Thank you very much in advanc 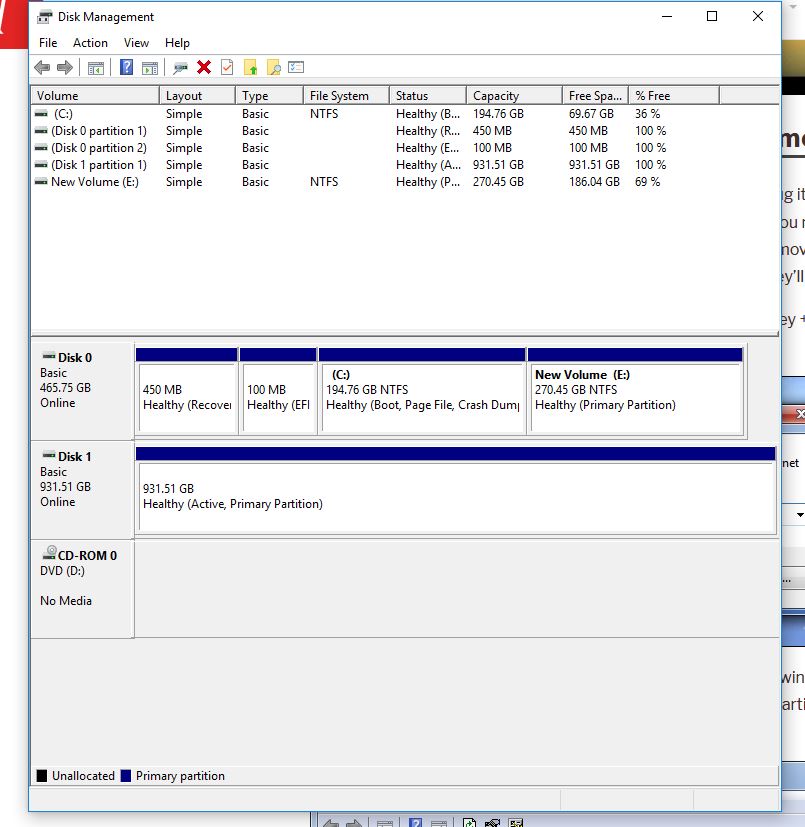 You might try system restore in "Control Panel". If you decide to do this, it might be a good idea to use the "Show/Hide" tool to hide the problem update after the restore.

Thank you but System Restore had not been activated on this computer, apparently is is disabled by default. Therefore I do not have a restore point point before the event.

can you get into the Advanced Menu window, you might be able to fix it from there using the on-board tools?:

Hey Redcow; you're not alone in this.....I'm affected by whatever MS is doing on my plain jane USB 2.0 thumb drives. I get every now and then "this drive needs to be formatted" before you can use it error. Knowing full well it was 3 months ago and it's completely empty.

Luckily for me....I have a built in docking station and using that with some regular 2.5/3.5 inch HDD's, is what I use for storage and what ever else I want. I just use a thumb drive every now and then to make a bootable USB drive with MS MCT with the latest build version of windows 10.
Ad

Redcow said:
Thank you but System Restore had not been activated on this computer, apparently is is disabled by default. Therefore I do not have a restore point point before the event.
Click to expand...