When trying to manually create a restore point from System Properties/System Protection tab, the process runs without ever completing. I've let it go 20 minutes and still nothing. Have to go to Task Manager to get it to stop.
Based on info I had read online, I deleted all previous restore points and verified system protection was turned on. Disk Space Usage limit is set to 10%. Using Norton 360 -- tried turning off -- no improvement.
System info: Windows 10 Pro Version 1909. Toshiba laptop. 250 GB drive; 164 GB free. 8 GB RAM.
Ad

I installed Version 2004 when it was first released, and had a bunch of problems (I don't recall exactly what); bad enough I reinstalled 1909! And, due to having stupidly done a disk clean, including updates, that had to be a complete reinstall! So I'm gun-shy of updating. I haven't kept track -- were there significant issues with 2004 which led to a 2009 (which I hadn't even heard of until now -- was that a typo?)?

DickinSD said:
were there significant issues with 2004 which led to a 2009
Click to expand...

2004 had several bugs, 2009 (not a typo!) is stable and I personally have not had any problems and have seen none reported on this forum at least!. Do the upgrade and it should solve your problem!.

The bugs in 2004 were patched. I'm running it on one of my older machines without issue. 2009 is a small upgrade.

I'll give it serious consideration! Meanwhile, based on some input from one of the folks on the other Windows 10 forum (Ten Forums), I stopped Symantec SpeedDick Service and disabled automatic system checking being done by Norton 360. Don't know which one it was, but I was able to immediately create a RP. Rebooted and tried again to rule out it being a "false positive" -- again, no problem.
Ad

BigFeet said:
The bugs in 2004 were patched. I'm running it on one of my older machines without issue. 2009 is a small upgrade.
Click to expand...

I agree. No big deal. As with so many updates, they have moved a few things around and changed a number of icons (Now with Transparent background. - Still known as Windows 10, but 20H2 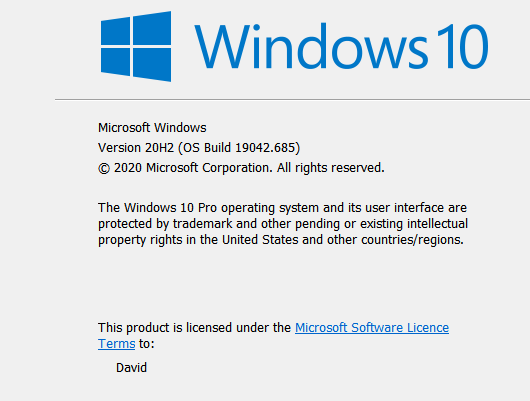 Can you upgrade from 1909 directly to 10H2, or do you have to do 2004 first? One of the articles I was researching seemed to suggest this.

Windows Update page in Settings (one one of my two 2909 computers) continues to show "Version 2004 coming soon for your computer." ?

DickinSD said:
Windows Update page in Settings (one one of my two 2909 computers) continues to show "Version 2004 coming soon for your computer." ?
Click to expand...

When a user receives that message, it mean that Microsoft have some compatibility issues with your particular computer.
Best wait until it is available - without that message.
Ad

Here is the link anyway.