my PC is randomly chrashing and I can't figure out, why this is the case. I tried looking into the event viewer and tried fixing some errors, but the crashing still happens. There were some issues with the dmw.exe so I disabled it. I checked for all drivers.
This crashing happend with my Win 7, I updated it to Win 10 and wiped all data from the harddrive, but that didn't change anythin too.
I attached a screenshot from the event viewer. You can clearly see, when the PC crashed.
I hope someone can help me with this one. 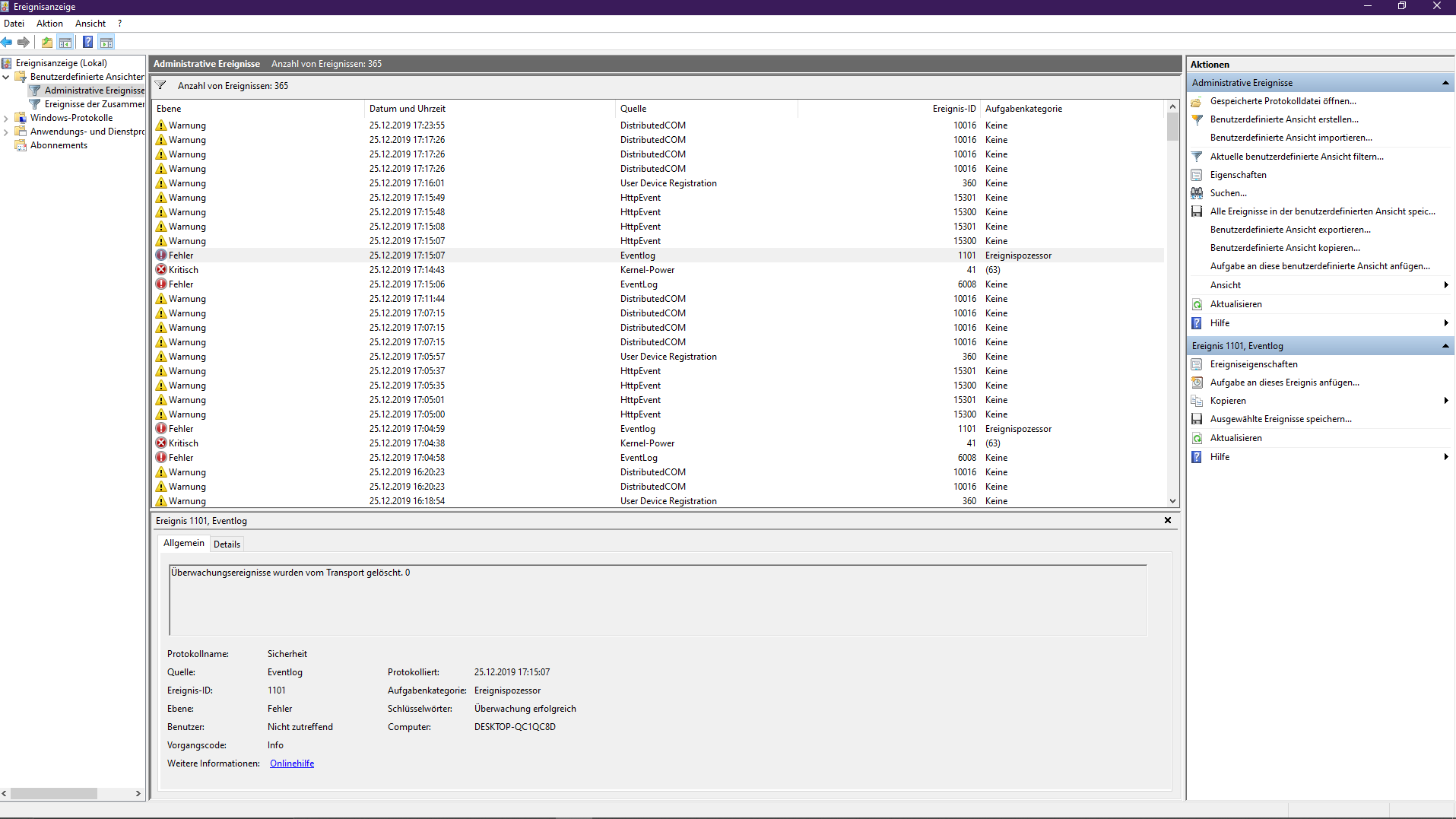 Hi and welcome to the Forum.

You have three errors in your image that are a little troublesome in my mind.

If you are comfortable opening your Desktop and checking your PSU and its cables, you ought to get on to this promptly, but personally, this type of work is best left to professionals with the correct equipment and knowledge to do the work without further damaging the computer.

If you take it to a professional, I'd be asking they check the PSU, all cables that connect to is ( including your power external power cable ), plus check that any heat sync on motherboard is sound, and also check that the fans in the computer are running and the obvious, make sure there is not a build up of dust clogging the vents to the Desktop and fan.

Of the three errors mentioned above, its Event ID 41 that to me is the most concerning because that one rules out an issue with Windows 10 itself, or any drivers installed, as its directly linked to power supply to the computer. ( i.e. Hardware ).

I'd recommend you do not power this computer on again until its been thoroughly checked either by your or a professional.

Hi and thanks for your quick response and I will leave the PC turned off.

My PC crashed again while I was waiting for an answer and during that time, I was watching a video. The sound stuttered a bit, my screens didn't get any signal, but the video kept running when it crashed. Maybe this can help?

Your GPU or if you have a Graphics Card installed, may be faulting, or overheating then. If this is happening that will prevent a signal reaching your Monitor, and if you are hearing static noise, that could be a sign of intermittent surging from the power supply to the motherboard, or something else altogether, for example a faulting audio chipset on the Motherboard. Either way, it would be wise to check the computer thoroughly yourself, or get a professional to, to prevent severe damage to the computers motherboard or hard drives. Power surges can be very destructive and very expensive to fix, versus spending a few hundred on a new PSU if that is the issue.

I'm not a hard ware expert, so I'm only offering you advice here. As I said in my last post its Event ID 41 I'm most concerned about.
L

Thanks for your advice. I will visit an expert then. If you are interested, I can keep you updated.

That would be great if you can update this thread once your computer has been checked.

Hopefully, whatever is wrong will not prove too costly to repair.
Ad

CODE 6008
Event ID 6008 entries indicate that there was an unexpected shutdown. Critical thermal event indicates that the problem is related to one of your hardware components not functioning properly that is triggering the computer to shut down. Check if your CPU is overheating. Also c heck if the heat sink or fan is functioning properly. If the laptop is under warranty, get in touch with the manufacturer.

CODE 41
The Code 41 error is one of several Device Manager error codes. It's caused either by a hardware device that's been removed after the driver was loaded or by an issue with the device driver itself.

ERROR ID 1101
(This is the most common error on any Windows OS System.) generally it is due to MS OS miss reading, and can be corrected by

A. Repair Install of the Original OS. - caused by DPM - usually does not cause BSOD.


To provide feedback about the types of information that would help you resolve this error, please contact the (e-mail address removed).


My issue is with the 6008 - which usually is a sign of Video Issues... mostly caused by "Over Heating" and can be corrected by "usually - remove the Video Card, clean, then replace and reset to Default... "NO OVERCLOCKING"
L

So, as you recommended, I went to a professional for him to check the hard ware. He found two things: First, the CPU died due to overheat (which I stupidly never thought of...) and second, that the BIOS was so old, that it isn't compatible with my CPU in the first place and that the PC never should have started (I never touched the BIOS and I didn't knew either, that I had to update it myself).

So, to fix the issue (PC is running for about 10 hours now, I think it's fixed) he switched to a stronger cooling system (apperently mine was to weak) and updated the BIOS, that's it.

For some readers in the future with similar issues, he also mentioned, that it could be a broken display cable/monitor, which sends a voltage back to the GPU, which then crashes.

So thank you both for you advices, I very much appreciate it!

Thankful that you got it fixed, and the cost was within your range... Congratulations.
Ad

Thanks for the update.

It's odd they felt the BIOS was never suitable but as I said I'm not really a hardware expert, so given they felt the need to update that software package to support your hardware I'm not going to question it.

It's a pity the CPU got damaged, but atleast now your computer is back up and running.

If you have not already done so, now the computer is working safely, it would be a great time to backup and important files.