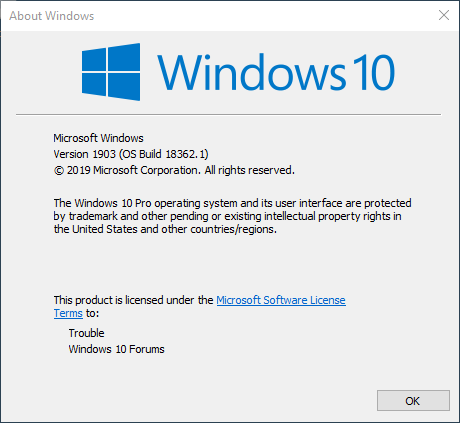 Very optimistic.
I on the other hand feel a responsibility to represent those more pessimistic among us
Behold..... No end in sight

Tried this and it failed just like all other updates since 18305 and 18342.8 that I am using. Windows is trying the latest slow build again without my permission and no way will this junk work. I hate Windows development boss!
T

TedWilt said:
As always the very slow update of 18356.16 failed at the 60% of installing updates
Click to expand...

I found something else over on the Microsoft forum. It seems to run a Powershell script to make readable a particular file related to install problems. You might try that and I did check the Zip file it downloads with Malwarebytes but of course, still be careful. If you double click the bat file it should run and give you some type of readout. When I ran it there was no file available for it to read.

Let us know if it helps and if you feel it is safe for others.

Have attempted to update Windows 10 to insider preview 19h1. The setuperr.log was accessed, showing loads of errors. I need help in interpreting the errors. Below is the setuperr.log
answers.microsoft.com
Ad

They are already releasing 18362.1 to the Slow Ring... If they don't release a new Fast Ring, the Slow and Fast rings will be on the same build?

I'll wait and see.
It's Friday and in the past they have in some cases waited until 2:00 P.M. pacific time to drop a new build for Fast Ring.
Waiting for something to hit the Release Preview Ring.

Anybody actually have a Slow Ring machine.
They're mumbling about an ISO of this build as this will be the third Slow Ring release without an ISO.
Their flight hub is not showing this under the Slow column, as of this time.
T

I downloaded this so called slow ring release with exact same name as fast ring. Same result. Installed up to the last 60%, wait a while and then get that error message saying restart and try again which of course does not work either. I am wearing out hard drives with this junk. Note I use more than one hard drive so I can get different builds and not mess up my best working drive.

I had no issues whatsoever installing the last one.....
Ad

@TedWilt have you tried doing an in-place upgrade of the build you are currently on? It looks like the RTM has been decided so it might be a good time to get your system working, or wait until the public build is released and clean install with that, assuming a clean install would fix your problems...

Some folks are having a situation of the install stopping around 7% of configuration. It doesn't look like anyone here has yet seen that but Microsoft is aware.

I just noticed they have updated the blog you linked to in you first post... so at least one thing has been fixed, the Microsoft store apps not loading automatically .. I wonder why they had that at a high priority ..

They updated it again today referencing people who have experienced a failed upgrade to this build if the were attempting the upgrade from Build 18356.16

UPDATE 3/26: Over the last couple of weeks, Insiders in the Slow ring have been receiving new 19H1 builds in addition to also receiving Cumulative Updates. After flighting Build 18362 to the Slow ring on Friday, Insiders began reporting they were unable to complete the update. We have discovered an issue with the Build 18356.16 (KB4494123) Cumulative Update that was preventing the update to Build 18362 from completing successfully. This issue only impacts Insiders who are on Build 18356.16 who try to update to Build 18362. THANK YOU to Insiders who reported feedback on this in Feedback Hub and upvoted – your feedback was immensely valuable in helping investigate this issue over the weekend! The team is currently working on a fix now. In the meantime, Build 18362 will no longer be offered to Insiders who are on Build 18356.16, so Insider PCs don’t continue to try and take Build 18362 and fail. We will post another update once we release the fix and resume the Build 18362 flight. Thank you!
Click to expand...

Trouble said:
They updated it again today referencing people who have experienced a failed upgrade to this build if the were attempting the upgrade from Build 18356.16
Click to expand...

I noticed that and my first thought was, since a CU was responsible for the problem, did anyone try uninstalling it. They stated the build had been pulled for those using 18356.16 .. but did not indicate they would not allow the prior version to receive it.

I wonder if this is something that might delay a public release. I feel the problem is related to the fact they had stated the problem with the Microsoft Store Apps was fixed ... It seems the setup diagnostic utility found the Migration Plug-in was failing....

Saltgrass said:
I wonder if this is something that might delay a public release
Click to expand...

I suppose my immediate response when it comes to these types of issues should be.....
I Don't Know, followed by I Don't Have A Clue.
I can only quote them

We will post another update once we release the fix and resume the Build 18362 flight.
Click to expand...

As I don't have an install on the "Slow Ring" I'll just continue to monitor the blog updates to see what follows.
The actual "public release" isn't expected until April so they have the rest of this month and all of next to sort out the problem.
I would think this would be a top priority but who knows, given that the "Insider Program" has developed a Creep problem
Edge insider, Skype Insider, Bing insider, Office Insider, etc., etc.
AND
As usual, about this time, with most previous installs.....
We're waiting, listening, watching and trying to stay informed.
Ad

I see that they posted an additional update to this issue yesterday.

UPDATE 3/29: We have enabled the seeker experience in Windows Update for Windows Insiders in the Slow ring. That means in order to recieve Build 18362, you will have to go to Settings > Update and Security > Windows Update and click the “Check for updates” button as the build will not automatically download and install from Windows Update. This experience will only be seen for Insiders who are not coming from Build 18356.16 – see our note from 3/26 below.
Click to expand...

Which doesn't exactly move the needle in a meaningful way, although it is nice to know they have something called "the seeker experience"

I noticed there was a user upgrading from a build prior to 18356 and his install stopped at 35%, so maybe this triggered another situation.

I did see they are no longer checking for cheating software... maybe there were too may applications which could meet such a criteria..

Well, the next work day is April 1st .... it would be appropriate for them to release a new Win 10 build on April Fool's Day

The release preview ring for 17763 should should have a CU update.
Ad 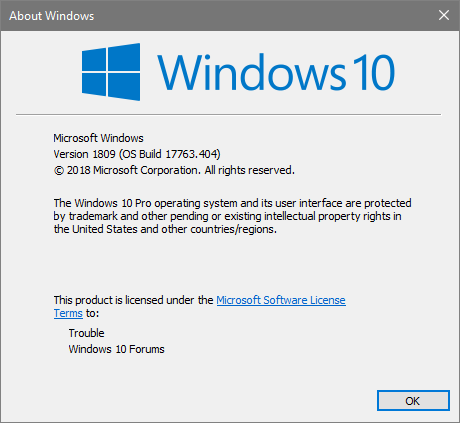 Which may be the strongest signal I've seen so far that *might* indicate something close to an RTM
OR
Just testing the waters for the next update Tuesday coming a week from tomorrow.
Last edited: Apr 2, 2019
You must log in or register to reply here.