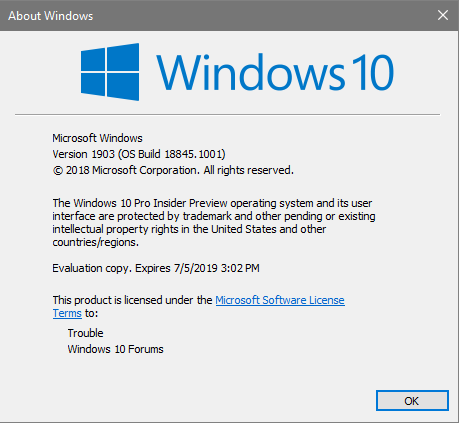 Seems to have installed nicely without any added hoops to jump through, so.....
That was nice for a change and it seems to be running OK so no complaints so far.
Last edited: Feb 28, 2019
Ad

It looks like interest in these latest builds are waning. Perhaps they are coming so rapidly folks aren't having time to evaluate the one prior. I may go back and compare the blogs regarding what was fixed in a certain build and see if it changed from one to the next..

I have always thought Microsoft should include info to allow testers to target a part of the build which has been modified. I remember seeing one where they were mentioning a specific area but that was just on the one build.

The comments about known problems regarding cheating software for games is interesting. I have seen where some detectors see the audio direction finder as a cheat... I don't use one but it probably give a player a small time advantage in recognizing threats..
Ad

Given 6 months between official release of full upgrades, that doesn't give one a whole bunch of time for evaluation, let alone 1 or 2 a week in various interim builds.
They do throw out some "Quests" occasionally to encourage some participation in trying out some new bits.

Mostly I'm just delighted when nothing is broken that was previously working.