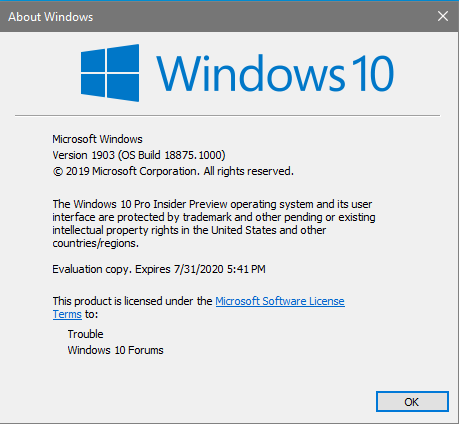 Considering that build is supposed to be a year and a half more improved than the build I currently have, I am not impressed. Actually, I might even say disappointed in its progress.

I wonder if there will be some insiders who will choose to leave the program...

Saltgrass said:
I wonder if there will be some insiders who will choose to leave the program
Click to expand...

IDK.... I've thought about it more than once but generally it keeps me entertained and gives me something to complain about.
It's definitely true however that there is very little recently that impacts the casual everyday user, of which I am one.

Having the nasty mind and thoughts such as mine, I am inclined to think that the whole insider program was, from the start, some kind of confidence trick to make the public feel they were part of the so-called "development". All the items, so far mentioned in successive insider updates, could easily have been incorporated into the existing, initial Windows 10, as Normal "Tuesday" updates.
My own observation is that, with regard to my initial statement, Windows has come to the end of the line as far as the OS is concerned. It can only be, now, added to with utilities (but which ones?)
I have, over the past couple of years, only been a casual visitor to the Insider site, bu I can read, from the voluminous feedback, That it, alone was largely falling on deaf ears - admittedly, most of it being so repetitious and, in many cases, pointless.
Sorry, my opinion only.

That's correct, but.....
It usually takes a while before they stamp it with a new "Version" Number.
They generally are building upon the previous version so the underlying version remains the same as the "build" numbers change.
I'm not sure if there is a policy or protocol for the new version number but it's generally later on in the development
Ad

UPDATE to this update.
Added to "Known Issues"

UPDATE: We have received feedback from some Insiders that they are seeing a 0xca00a000 download error for Build 18875. We are investigating. Please upvote feeback item https://aka.ms/AA4qqb2 if you have experienced this issue.
Click to expand...

I guess it's fortunate that we're still over a year away from this one.

There does seem to be a workaround for this. The folks over at the Microsoft Insiders site are talking about disabling Windows Search. But if you want to see if Microsoft comes out with a fix, I suppose you would not want to use the workaround.

First the search, then something else.... At the end one has to disable Windows to get it to update [/sarcasm off].
I can hold off of it for some time, I really do not need it. Maybe its best to disable Windows update alltogether?? I mean, MS is working really hard to make everything worse.


Found a possible work around in the feedback hub:

Well, the work around worked. It is important though to delete everything in the "SoftwareDistribution" folder which can take some time.
I tried it first just deleting the "download" folder. Although it went much further than before, it did not finish showing the same error code.
Ad

It looks like MS are having immense problems with their ambition to make Windows 10 backward compatible. These constant complaints certainly indicate a weakness in their attempts at hardware incompatibilities.
Installed for me, without any hacks, on an old Vostro and on my dedicated insider Dell E5570) 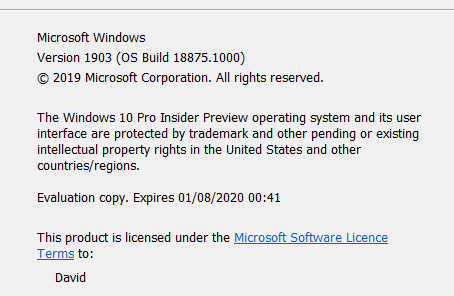 A "Check for updates" is no longer finding it so I'd presume Microsoft has pulled it down.

Bighorn said:
A "Check for updates" is no longer finding it so I'd presume Microsoft has pulled it down.
Click to expand...

There is supposed to be a CU out for 18362 which will allow for updating to 18875. Same link as Trouble posted earlier..

The message on that link is the fix should be available end of the week.

amazing. Just opened my old insider dedicated laptop, and it immediately began updating. I now see this, no watermark either: 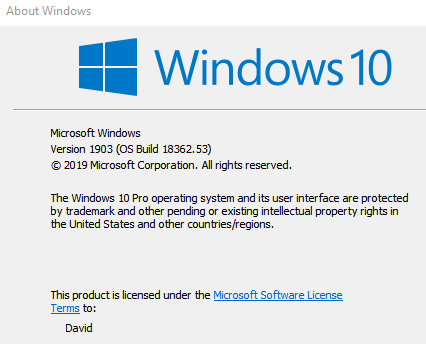 fwiw.I am on slow.
Ad

www.windows10forums.com
Which is the ongoing May 2019 (formerly known has 19H1) build which should be out soon.
This thread is aimed more at the builds for the future 20H1 builds which was formerly the "Skip Ahead" offering but now they are saying that "Fast Ring" machines will be receiving it also.
Ad