Photoshop isn't Freeware. I paid for it. I am becoming quite tired of these #@!% "updates". When I tried to open Photoshop, I got this message:

"Unable to continue because of a hardware or system error. Sorry, but this error is unrecoverable."

I uninstalled it, used CCleaner to get rid of the junk that's left over after an uninstallation. Then I reinstalled Photoshop. Same thing.

are you running the latest version?. If not, what version do you have?.

I get the same updates that everyone else complains about when big updates are allowed to escape into the wild.

How about this--- Windows 10? Latest version? I'd expect it to be the latest. I get updates. Help me out here.

He's asking what version of the Photoshop suite you're using. I'm running an old CS2 version, for example. You need to be as specific as possible if you want a precise answer. Otherwise we're just guessing at what you mean.

you say the computer is 3 years old so I can only assume that the version you have of your Adobe app is somewhat old(er). With regard to Win 10, press the Windows logo key + r and type "winver" and paste your screenshot like mine below please. You should be on version 20H2 (2009). If you don't have that version, please upgrade and try your Adobe app again, even going as far as a fresh install of the app!. 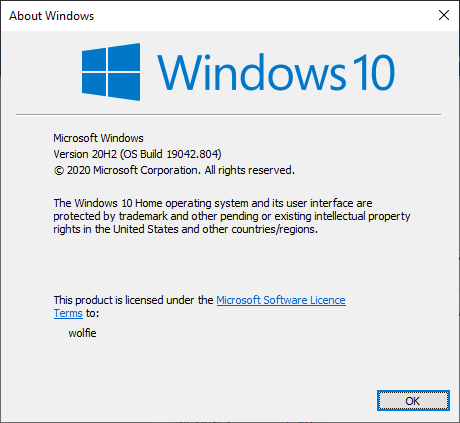 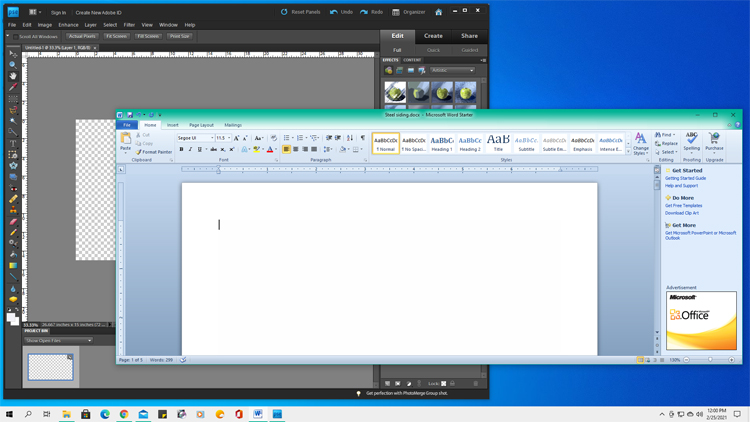 I OWN Adobe Photoshop 6. Never had problems with it until recently. Word 2010 is experiencing format changes.

Wolfie--- Thanks. I'll give it a try. I moved Adobe Photoshop 6 to the machine that NEVER goes online. No problems at all.

I've never been a fan of Apple. I trained on Apple. I don't like it but my next computer will be an Apple. This Windows Operating system
Hoovers BIGTIME.

I can't take a screenshot from the "About Windows " window. It does indicate that my build is Version 2004 (OS Build19041.804). Fresh install? It would be nice if I got a disc with the machine to do this. I made some sort of a backup thumb drive to use whenever Windows self-trashes, but I checked the thumb drive and (despite having gone through the rigamarole of downloading whatever is supposed to be on the thumb drive) the thumb drive is empty.

I've tried all of the suggested ways to roll back these Microsux downgrades, but none of them work.

Go to the link below and click on Update now and run the update assistant.

It won't allow me to take a screen shot but it reads (in this order):

It indicates that my program is a Windows 10 home operating system.

It must have done a background update at sometime as you have the latest version?.

Have you tried re-installing Photoshop in the meantime?.

Yes, I have reinstalled Photoshop but no cigar. I moved it over to a machine that isn't connected to the internet and gets no updates.

so you have it working now but not on the intended device, is that correct?.

That's correct. Something that I didn't mention in my earlier posts is that the first window that I got when I tried to use Photoshop is that it suggested that I move the program to another drive, one that is not integral to the computer. (I don't remember the exact words. I've seen that only once). I haven't gotten that dialog box since. What was that suggestion about?

I tried to delete the update that escaped from Microsux lab and (I suspect) created this problem, but none of the suggested methods work. I can't find any function that indicates that I can roll back or delete the update, just delay its automatic download.

When it is discovered that automobiles have manufacturing problems, the manufacturers are required to issue a recall. Why can't Microstuff be compelled to do something similar? I know that there those who absolutely LOVE to scr*w around with their computers to fix problems and can do so because they know everything about their computers. They're like those who spend years restoring old cars but never drive them. I really don't feel like becoming a computer technician just so that I can fix Microstump's bad programs.

I just retired a Windows 7 laptop that rarely got an update. Maybe three during the fifteen or so years that I owned it. Every attempt to update it failed. I guess that I was just lucky.
Ad

I'm a little behind here. In truth, I don't know how to copy a program from my computer. I'll give it a shot, tho. Thanks for your help and patience.

simply copy the folders you want to a USB stick and then paste them in the same folders in the target device!.
Ad

Sorry for not responding and thanking everyone. I haven't gotten the PS6 working on my computer that goes online, but the computer that never goes online works just fine. It's just a hassle to move things from one computer to another.