What is the difference between Windows OEM key and Retail key? Why is OEM key so cheap?

What is the difference between Windows OEM key and Retail key? Why is OEM key so cheap?
Ad

OEM binds to the hardware of which it is activated with. Retail can be transferred to other systems. Microsoft will not give phone support for OEM. They request the system builder hold that responsibility for OEM.
P

The OEM key is supposed to be tied to the hardware from which it was activated in the first place. However my experience has been quite different. I had Win10 OEM registered and running on my i3 system. When the system crashed I upgraded it to an hexacore i5-9400-F system. Connected the drive with original installation. The system simply downloaded the latest chipset driver and carried on. No issues of any kind. Couple of months back again when the i5 system crashed I decided I had it with intel system and went straight for Ryzen 7 5700G. A completely different platform. No sweat. The system downloaded the AMD drivers and the installed Win 10 simply carried on with updates.

The OEM keys are cheap because of deals the OEM manufacturers made with the publisher. As mentioned the Retail key can be used on a Replacement computer [but not both at the same time]. Small shops can usually get the System Builder Version of Windows at a lower cost from Retail.

Well, with OEM you also get a lot of sponsored crap (Trial versions and AV apps you may not like) which you don't have with retail.
P

Grizzly said:
Well, with OEM you also get a lot of sponsored crap (Trial versions and AV apps you may not like) which you don't have with retail.
Click to expand...

Not true. You get all that crap only when you buy a laptop or a desktop with preinstalled OEM version of Windows like from Lenovo, Dell, HP and others. They customise and add garbage to reduce their own cost of the OS.

The straight forward installation ISO file is not OEM. Insofar my statement is correct.

I just used the USB Thumb drive created by the MCT process, wiped the HDD of Linux, chose to install the Pro version which had been done couple years ago. I told it I didn't not have a key and it finished the install with a Local Account. After up and running I checked the Activation and it was activated with a Digital License. Obviously Microsoft Servers saved everything and was relatively painless. The only issue was the video card worked fine in Linux but in Win10 the resolution was low and proper drivers couldn't be found, apparently too old so I changed the card and all is good.

Thought I'd add this from System, Change product key section: 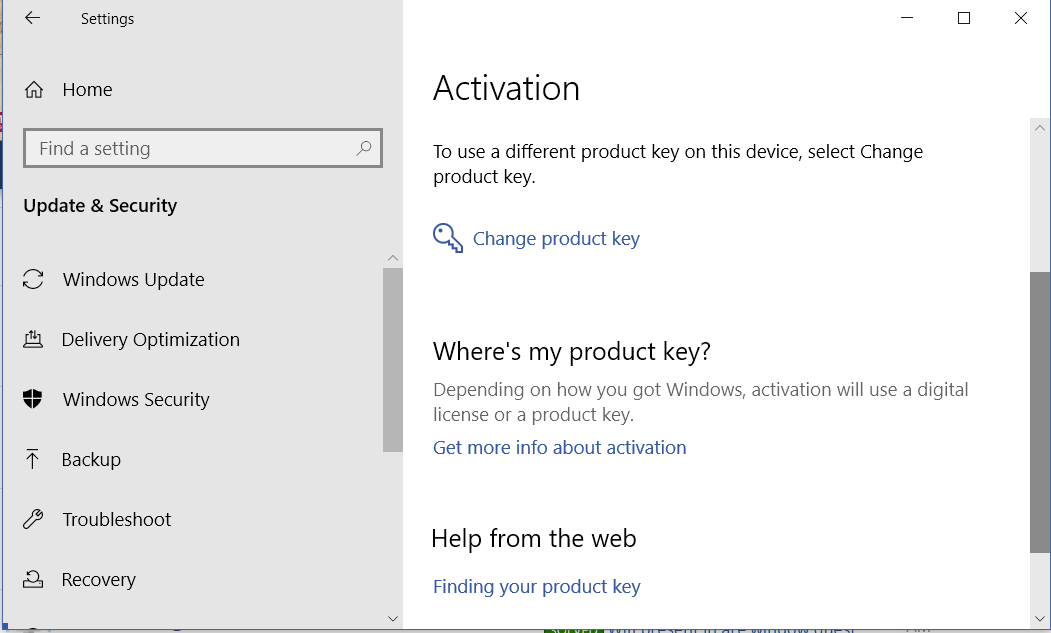 Grizzly said:
The straight forward installation ISO file is not OEM. Insofar my statement is correct.
Click to expand...

The OEM disk that are sold online do not have preinstalled third party software bundled. Pradip Shah was correct. It is the system builder that installs the OEM package that includes additional software in their installation. It is a choice that the system builder makes in deciding which software is included.

It is known that Microsoft doesn't want consumers installing the OEM package for themselves. But since they don't do phone support for OEM, I don't think they actually care. I mean seriously if they cared, they would keep OEM in private channels. And to extend on your statement. I once downloaded an old version of Windows but the key wouldn't activate Retail. After a bit of research I found that manually editing one file in the package would toggle it to OEM. Since I couldn't find an OEM version to download. I was happy to try the edit.
Ad

Grizzly said:
The straight forward installation ISO file is not OEM. Insofar my statement is correct.
Click to expand...

Straight forward installation ISO is anything you want it to be. Whether it is OEM or corporate or retail will be determined by the key used to activate and register it. Only version different is the Home edition which leaves out a number of useful features.
Ad