I don't know about you, but I don't particularly like downloading something so that I can then, download something else.
I really liked the old Techbench landing page that Microsoft made available, so that we could just access the available Operating System ISOs and download them directly.

I recently discovered a workaround that works somewhat similarly.
The Media Creation Tool https://www.microsoft.com/en-us/software-download/windows10 is still an excellent option for most people but I use this technique now (for as long as it continues to work) to just grab the ISO that I want.

I used Internet Explorer for this example.
The same thing works with Edge using the developers tool option (F12)
Like wise Chrome and Firefox both have extensions you can install to switch browser emulation on the fly.
Chrome = https://chrome.google.com/webstore/detail/user-agent-switcher-for-c/djflhoibgkdhkhhcedjiklpkjnoahfmg
Firefox = https://addons.mozilla.org/en-US/firefox/addon/user-agent-switcher-firefox/

Using the link above in IE.... right click anywhere on the page and choose "Inspect Element" or strike the F12 key on your keyboard. 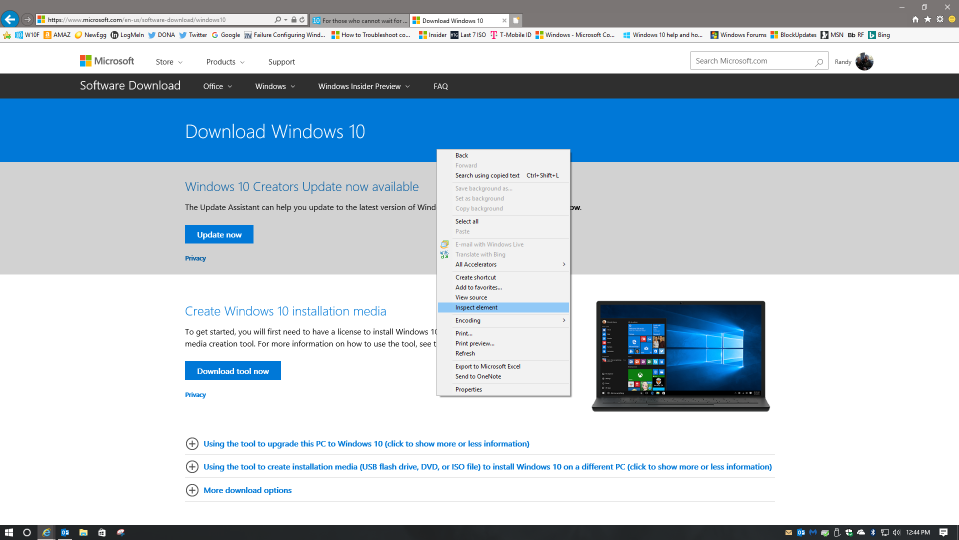 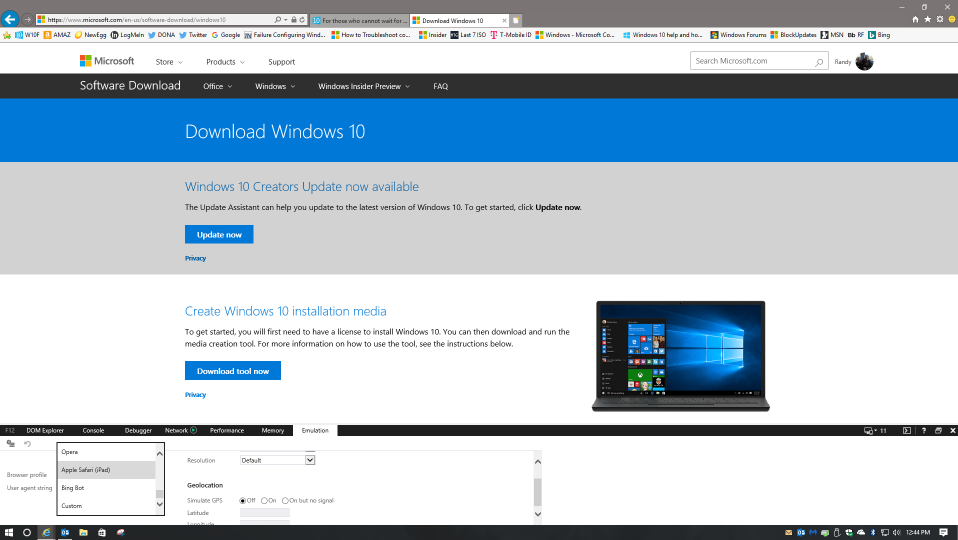 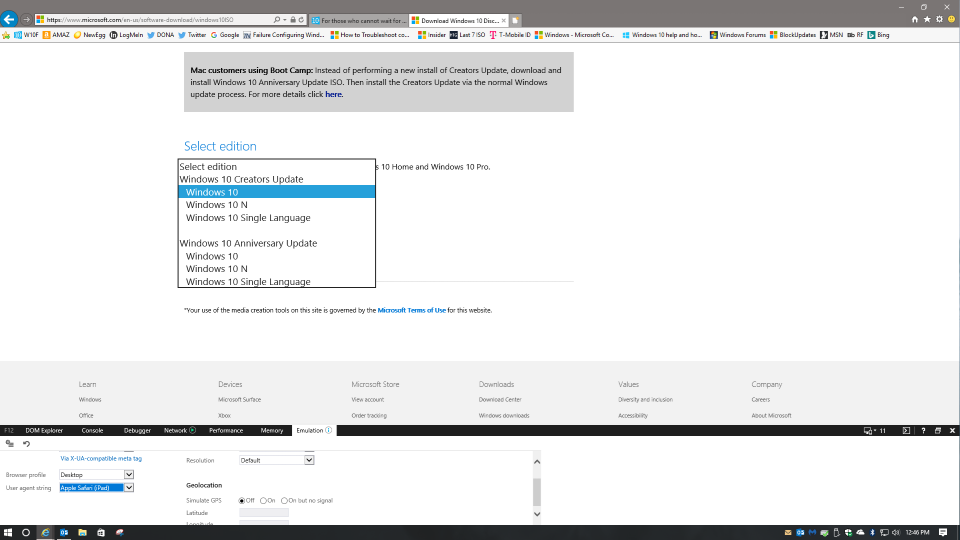 Which behaves very similarly to the old Techbench page and allows you to select from the available ISOs, including
Windows 10
Windows 10 N
Windows 10 Single language
AND from there your version language, and bit version (32 or 64 bit)

IDK..... it's probably just me, but I prefer to get what I want, when I want it and not have to rely on the media creation tool, which is perfectly fine for most people.
Ad

I wish you would have posted this yesterday, lol. I'm with ya though, I hate having to download what amounts to a download manager. It just seems unnecessary. Thanks though, I will definitely bookmark this thread.

Edit: This thread should be stickied btw.

I just came upon it the other day and I thought......
That's to much of a P.I.T.A to even mess with but then I tried it and it was so easy and just involved a few clicks of the mouse, I thought I would pass it along just in case anyone else was like minded.

I'm going to try this software when time to update.

I've used it frequently in the past and always found it to be reliable.
Let us know what you think when you get around to it.

I've used it a few times myself, but my skeptical radar is still turning.
Ad

Trouble, I like your post, but, I just cant seem to get it to work with Firefox. I don't see the emulation drop down box to grab the ISO ? It just takes me to the regular Media Creator Tools

Have you installed the "Agent User Switcher" add-in for Firefox from my link above?
IF so..... just select it from the top right of the firefox browser and pick the Apple icon first one top left in the selection menu and then click the refresh button in the Firefox Browser or hit the F5 key on your keyboard..
That does it for me, but....
I'm no big fan of Firefox.
I had to reinstall it just now to see if I could make it work as advertised.
Seemed to work fine, as a matter of fact, I kinda like it more that the way you have to do it with IE, Edge or even Chrome, although Chrome works pretty well also.
Last edited: Apr 14, 2017

Thanks for sharing that Trouble.

Trouble Thanks Again! For some strange reason the "Agent User Switcher" didn't install correctly (no icon in tool bar) Reinstalled, and works great as per your explanation, the interface is very easy to use. Downloading the ISO now.

Excellent trick, in fact from double @Trouble, I am a fan

I was using my Android phone but upon seeing this I decided to give it a whirl over Firefox.

As far as I can see, if you set any of the mobile user agents you automatically get the download ISO directly and works a treat.

Unrelated to this topic:

I found a bug with the recommended https://addons.mozilla.org/en-US/firefox/addon/user-agent-switcher-firefox/ addon + Firefox 52.0.2. Even if you disable the addon,

You can still use the user agent switcher via the Toolbar button: 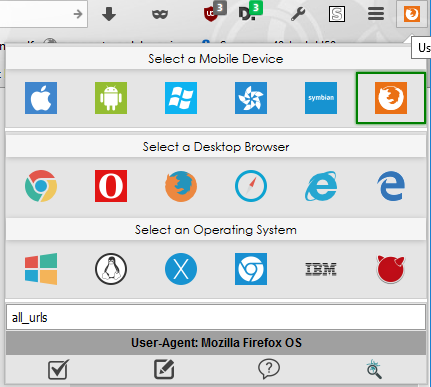 The Firefox User Agent Switcher you link to has been surpassed by https://addons.mozilla.org/En-uS/firefox/addon/user-agent-switcher-revived/

Same developer except that one fixes the bug I noticed and performs/works better.

@Trouble IDK if you are still monitoring this thread but here is something that also works in addition, I've tested it and it works and resulting ISOS are equal to using method bypass.

Its also added to https://www.windows10forums.com/threads/useful-software-downloads-list.12882/

I'm not familiar with the tool you've linked to but it would seem to be very similar to another one broadly discussed in other threads on the forum
https://www.heidoc.net/joomla/technology-science/microsoft/67-microsoft-windows-and-office-iso-download-tool
Which I've used often.

As far as I'm concerned, you can't have too many resources or methods of acquiring the ISOs, so appreciate the additional tool(s) and information.
Ad

Thank you for reply


Trouble said:
I'm not familiar with the tool you've linked to but it would seem to be very similar to another one broadly discussed in other threads on the forum
https://www.heidoc.net/joomla/techn...icrosoft-windows-and-office-iso-download-tool
Which I've used often.
Click to expand...

Yes, with exception the one you mention supports office ISO's as well, perhpas thats actually a better tool to suggest then.


Trouble said:
As far as I'm concerned, you can't have too many resources or methods of acquiring the ISOs, so appreciate the additional tool(s) and information.
Click to expand...

I couldn't have put it better myself

Lets hope people looking can be bothered to find them,

Have a good day there
You must log in or register to reply here.