Black/white horizontal bar across the screen in Adobe and Chrome

Myself and the rest of our IT department have been struggling with this for almost 8 months now.

The issue: Every day, in Adobe (Acrobat and Reader) and Google Chrome, one of our users is experiencing a bar that stretches across the entire screen. This bar varies in height, as well as color. Sometimes its white, sometimes its black (image 1). Sometimes, it is even a frozen image of an earlier window at that position (image 2). When clicking in this bar, the window disappears and the window behind it is active. I have attached screenshots of the issues 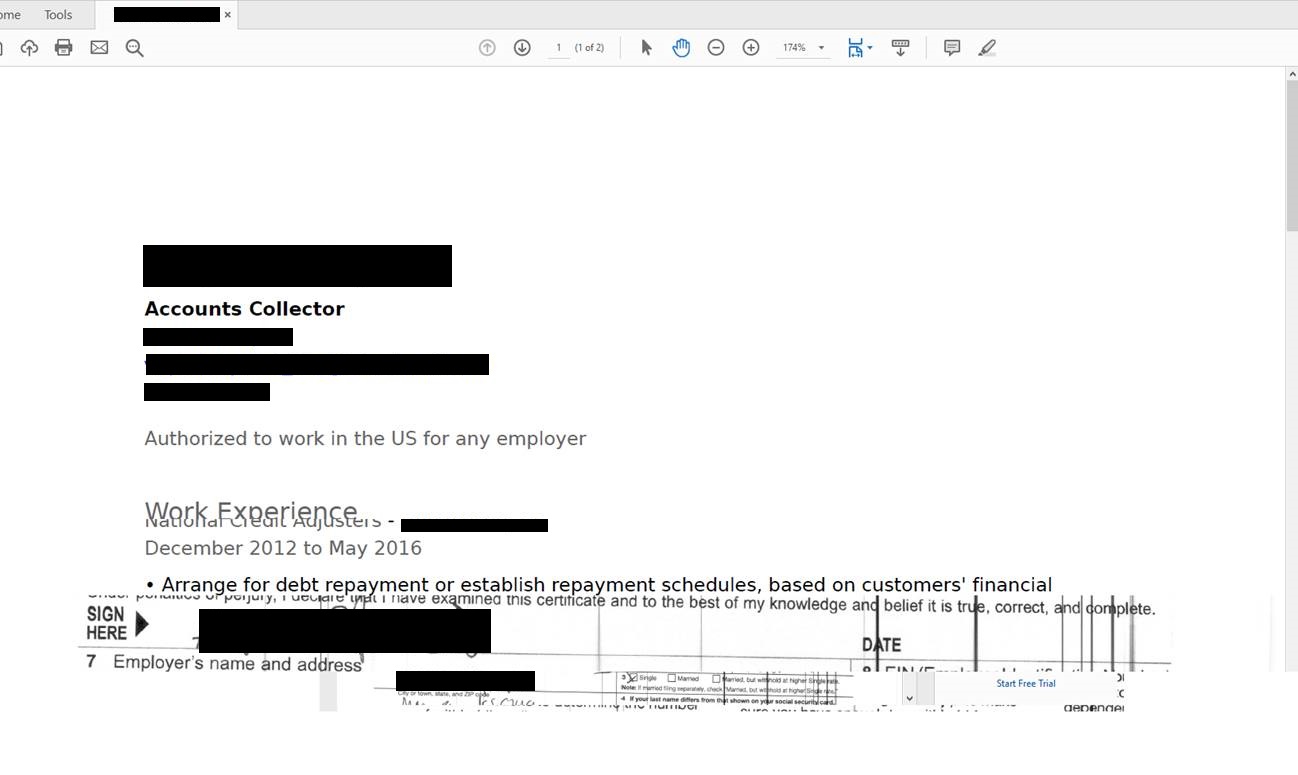 This issue is user specific. The image used to build the computer is the same as everyone else in the department, and no software on this machine is unique to only her. All of this software is updated to the same versions as the other users as well. This user is not affected by any unique Group Policies.

The hardware: The user first started noticing the issue when she had a HP Elitebook 850 G4 and was using an external monitor as her main display (Display Port). The external monitor was situated to the left of her laptop display. This model is used throughout the company. During troubleshooting, we moved her M2 drive to another unit of the same model. We also tried rebuilding her M2 drive from that image and from scratch. Last week, we built a HP ProDesk 600 G2 and set her up on that. With this PC, we set up a second monitor on the right(Display Port). Therefore, the issue is not related to hardware.

The issue seems to only occur on the "main" monitor. Yesterday, we noticed that the issue was only happening on her left monitor, which was set up as her main monitor. For testing, we set up the right monitor as the main monitor, and the issue followed it.

Currently, the only workaround that we have been able to find is pressing F11 twice in Chrome, bringing it to full screen and back. I think she is doing something similar in Adobe. This workaround is extremely temporary. I believe we also tried refreshing the display adapter, but that isn't very helpful.

The user has tried paying attention to what she is doing when the issue occurs. From the information she has given us, there doesn't seem to be many similarities from day to day. One day she reported that the issue pops up after she opened a voicemail from an email attachment, but the next day when she opened a similar attachment, everything worked fine.

The one thing we can think of that she does differently from any other employee is open emails with PDF attachments from Indeed.com. However, she has not noticed the issue happening every time she opens one of these emails and attachments each morning.

This issue is not reflecting at all in the Event Viewer.

Things we have tried:


At this point, we are at a loss on what to do next. As you can see, we have tried very extreme troubleshooting steps, but nothing has helped.

Any help or ideas would be greatly appreciated.

Thanks in advanced!
Kaleb
Ad

WE too are having the same issues you are having. although the hardware is HP EliteBook 850 G5. We have tried everything you have and even replaced the monitors. I too believe it has to do with software/drivers. Were you able to resolve this? if so what was the resolution?