SOLVED Edge Runs While I Use Firefox

I've read about poking through folders and changing names and adding numbers and letters and such, but is there some way to disable (better yet delete) Edge? It slows down Firefox.
Ad

Keep in mind that Microsoft may try to re-enable Edge during a future update...
Last edited: Sep 4, 2018

Doing Ctl+alt+delete, Edge doesn't show up like it might on previous versions of Microadkill. Only Firefox shows.
Unfortunately, I am hesitant to disable Edge because there are actually websites that I can't access with Firefox.

C:\Windows\SystemApps\Microsoft.MicrosoftEdge_8wekyb3d8bbwe will bring me to a folder named microsoftedge and microsoftedgecp, but they don't open with left or right click! Right click gives me a screen asking me if I want to run as administrator. When I click onto "yes" NOTHING HAPPENS!!!!!

This sort of thing must drive you guys who try to help people absolutely crazy when you know that your suggestion SHOULD work but doesn't.

The clue was this "(I normally just append some text to it like "_rename" what next they you try to run it.

Okay, so I don't need to open the folder, just rename it, right?
So which folder do I rename? microsoftedge or microsoftedgecp?

I changed the name of the folder to microsoftedgeDISABLED and left clicked to effect the change. Then I got a popup saying "File Access Denied. You need permission from TrustedInstaller to make this change."

I tried "Run as Administrator", and I get the same message.

In an attempt to follow your directions exactly, I typed in "C:\Windows\SystemApps\Microsoft.MicrosoftEdge_8wekyb3d8bbwe" into Search. That's how I found microsoftedge and microsoftedgecp.

Typing File Explorer into search results in showing Edge and several other things that reveal folders that don't show any information that resembles your example. I get File Explorer Desktop App. It shows files of documents, photos, etc.

I tried hitting the alt key (as directed by an Edge web page) to bring up a menu, but that resulted in nothing.

Other things that show up are a host of Edge search suggestions.
Ad

Referring to you thread title. Do you mean you actually have an Edge Window running whilst using FireFox, or does it only show as active in the task manager?

No, no Edge window. Once, I did find an Edge screen below my Firefox screen when I shut off Firefox.

What is happening now is that sometimes, Firefox runs very slowly, and when I turn off Firefox, I'll run CCleaner to see that Edge is running. I get a dialog box telling me that Edge is taking a long time to shut down. Do I want to force it to shut down? I discovered this by accident. Now, when Firefox runs very slowly I, I close Firefox and run CCleaner. When Firefox has been running very slowly, I turn on CCleaner and get that dialogue box EVERY TIME. I don't get that dialogue box when Firefox runs quickly with no frozen screen. I've done a couple of complete reinstallations of Firefox, and I've installed earlier versions of Firefox to rule out Firefox being the culprit.
I've had this computer for eighteen months, and it has been full of surprises.

First, it was turning itself on in the middle of the night, then it froze after a Win10 update, necessitating a clean installation of Win 10. I worked with the manufacturer with both issues, but Dell couldn't find the problems.
This is becoming very tiresome.

Please know that I appreciate ALL of the input that I've received from this forum.

I also deleted CCleaner. Firefox still runs slowly sometimes. A reinstallation of CCleaner often indicates that Edge is running and taking a long time to shut down.

Edge is collecting cookies and history, , like all browsers. It is also the default PDF reader. With this combination, as said in an earlier post, it is regarded by the OS (Microsoft) as a system file.

In Ccleaner, there is in the option a separate section devoted to Edge. Turn to off all the items in that section..

I am running the FREE version of CCleaner that still shows Internet Explorer. The paid version has the Edge options, I think.
Ad

Even if you’re using the free version of CCleaner, there’s a section devoted for Edge

davehc said:
Edge is collecting cookies and history, , like all browsers. It is also the default PDF reader. With this combination, as said in an earlier post, it is regarded by the OS (Microsoft) as a system file.

In Ccleaner, there is in the option a separate section devoted to Edge. Turn to off all the items in that section..
Click to expand...

I am using the free version. 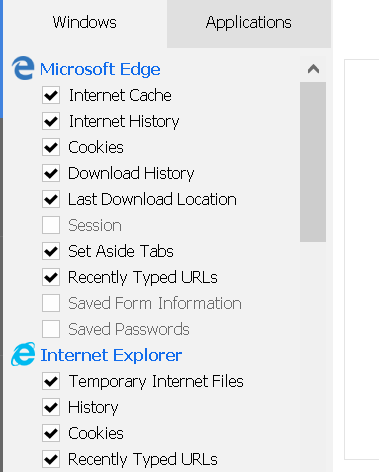 That area is for cleaning. When I click onto "startup" there is no provision for disabling its startup in the first place. Under "uninstall" the only thing that seems to come close is "One Drive" (whatever that is).

Ok. I think we have drifted a little.
Better get back to why Edge is slowing down Firefox (I don't use it) and why it is even running in the background. I have been watching my processes since this thread started, and I have not had any noticeable instances of Edge running if I am not using it.
Any Firefox users out there??
Ad

I finally just disabled it by deleting "Microsoft" before the term "Edge" and a bunch of numbers and letters that I'd probably forget. (I didn't delete the numbers)
Ad