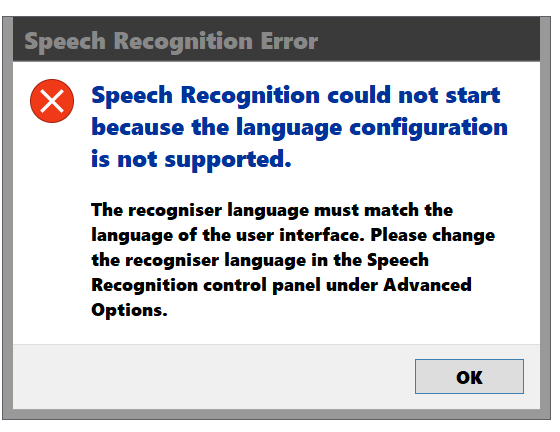 I think I can guess what this means but I do not understand it. I have opened the Advanced Options in Speech Recognition the Control Panel and have tried just about every option there, but still this popup appears whenever I launch Windows Ten. Plus there is only one language set in Settings, it is English UK / GB. The only other language available is English USA which I have also tried but without success. This is why I do not understand the statement about recogniser and user interface matching, as it cannot do anything other than match --- there is no other possibiliy I can select.

Help with this will be welcome!
Ad

7translation A quicky. - Look under the startup tab and see if you hace anything there, starting a language program.

My first thought, though, is that it is some kind of spam. What happens if you click OK?

Thanks for your reply and suggestions. When I click OK the popup closes. I was not sure if there was any other result (partly because I have another problem with sound,which may or may not be related (see below). But I had not been able to get the speech to text function to work. So I downloaded a couple of speech apps from the store, which took some time to get them working but as eventually I suceeded that shows the 'function is functioning' once I master the relevant app. So I still have possibly pointless popups.

Now to the issue I have with sound. This may not be relevant to this post so if so let me know and I will open another if necessary, but just in case I will briefly outline it here. For several weeks I have been getting really terrible screeching from the speakers (both internal and external) which reminds me of the feedback howel when a public address system is malfunctioning. Also, I can hear 'background' noise, echoing such as the TV or coughing noises I make, in addition to the intended sound from an app, such as music or spoken text. At least for the short term I have stopped this by changing settings in Ear Trumpet or Volumey. In the latter if I move the slider for SVCHOST to very / low or zero the screeching stops while sound from speekers remains OK. I know that SVCHOST can refer to many things but I would like to know what its relevance is in this case?

Leave your post in this thread. I feel perhaps both problems could be related.

I am certain another member will give good advice.

Thanks. The first problem --- unwanted popup --- has stopped (for now). The second issue which is 'why do disabling SVCHOST in Volumey (or its equivalent in Ear Trumpet) eliminate the awful screeching and echo' is not yet resolved. The reason I would like to know is not just the knowing, it is the (minor) issue of having to launch, and alter settings of Volumey everey time I (re)launch Windows. I have asked the Developer but did not understand the reply, so must look it it again.

Another issue, is how did my image of a goat at risk of falling off a rock, come to be selected as my symbol? It was plainly a mistake by me, but I am happy to keep it.
Ad