I just updated Mambam Premium to the latest version 3.0.6 it has quite a few more protection features.
It appears that they want you to purchase the new version? This is not so, download the Premium version and enter your existing license code (Identifier and Key codes) to activate existing license.

Thanks for sharing that Norton.

I do not actually use the software myself; but interested in your opinion:

Norton said:
I just updated Mambam Premium to the latest version 3.0.6 it has quite a few more protection features.
It appears that they want you to purchase the new version? This is not so, download the Premium version and enter your existing license code (Identifier and Key codes) to activate existing license.
View attachment 5197
Click to expand...

If you are on the free version where do you find the license code.?

Defender01 You have to pay a small fee to update to the Premium and obtain a license. The license is good for up to 3 PC's. For peace of mind, it's well worth the (18 Quid) 12 month fee.

Regedit I believe that the Exploit and Ransomware protection are new additions to an already excellent program. I run it on all my PC's and the Grandkids PC's. Never found any malware problems lurking in the OS.

Been using it for years.
I was one of the lucky ones who bought a lifetime license (when they were offering that) for $20 bucks.
AND my "key" and "ID" have continued to work on all subsequent upgrades (currently version 3.0.6) which I installed subsequent to my recent wipe and clean install.

Previously they offered an "anti-ransomware" as well as something called an "anti-exploit" as separate standalone products.
They've now apparently rolled both of those into the single Malwarebytes Premium product, which if you own the licensed product runs as real-time protection along side of Defender. 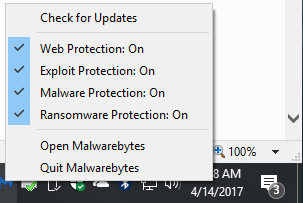 Not sure how effective this added protection might be, but....
So far, so good.
Ad

I had a license for the previous version and I saw the new version was out. They really didn't send message to the current users and I saw an ad for the new version so I did a chat session. I asked would there be a cost and they explained it was free to my renewal date. The upgrade is free until your renewal date. You also get 14 days trial for all the feature and after 14 days if you don't purchase you lose some of the protection. Not all but some.