Does any body use RAID 0? If so, have you had any issues or problems....small or large? Is there any real speed increase in using 2 hdd's vs 1 hdd?

I've do some digging around and found that on avg there is about a 10% overall increase in a RAID 0 set up vs a single hdd. Then went looking for issues.....and that's where it goes gray. The number 1 consensus is FAILURE....usually HDD failure. Most of the answers/responses are from users that never used RAID 0 or any other RAID setup for that matter. They just repost the what's already being said.

Those that do use RAID setups and mainly 0, most of them report no failures at all and that there raid setup is still running just fine. There are those that do report failures and some are HDD's. From what I've been looking at; it's (% estimate -just mine) the 80% nay sayers that don't use raid complaining while the 18% of actual user don't report any failures. Then the 2% that has experienced a raid failure of some kind.

Keep in mind, that these are my numbers from what I've been reading and just compiling my data coming up with averages. No real percentage facts. Example: 10 searches, of those 10, 8 never used a raid set up but jump on the failure band wagon and the 2 of the 10 have a raid set up and haven't experienced a raid failure.
Ad

Well, RAID 0 has no redundancy so if either hard drive crashes you lose all data. Yes, it is faster since your data stream is being split into two lanes each going to a separate hard drive.
I do run a RAID 0 with two older SSD an Intel 530 240 GB and an 840 256GB Samsung. I use this Array for my main data storage on my business front desk computer. My reason was my 500GB Raptor was failing and I had these two drives laying around. I can't say faster in real life since its a daily data drive its faster than the old Raptor was. You made me run ChrystalDiskmark bench on this Array and it does show to be about twice as fast as either of these drives alone. I don't worry as this Array is backed up 2x daily and has a realtime cloud back up. 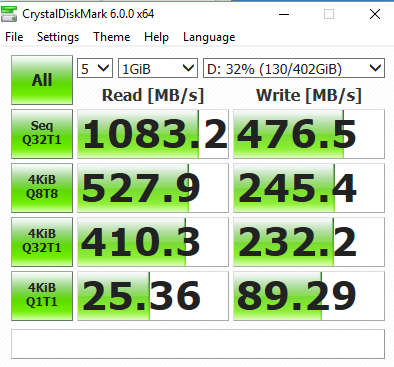 Clintlgm said:
Well, RAID 0 has no redundancy so if either hard drive crashes you lose all data.
Click to expand...

Fully understand that....but that's my point entirely. That's all I've seen/read about.....your loose your data "IF IT FAILS" and the majority of that rhetoric comes from users that "DON'T" use a RAID. Yes...I know it happens but I don't see it happening a lot as it's being reported as such.

Next questions; and this is to you directly as you are a RAID user.....if your RAID does fail, with your backups, how hard is it to repair the RAID with your backup's? Is it the same as a single drive? Do you have any issue with the 2 different hdd sizes? It's recommend to use 2 drives of the same make/model and size.

Well, in my case if one of the SSD fails, I have backups. If I want to replace the failed one, I would do that physically put in a different one. Then in my BIOS I would set the old and new SSD into RAID 0 boot into MR Recovery USB Restore my back up image to the new Array.
In real life, i would just purchase a 500GB SATA SSD and restore my back up to that.
Drives don't need to be the same as I said in my first reply 240 GB Intel and 256GB Samsung they will equal out to the size of the smallest disk. I have been running this array for nearly a year now and those SSD were purchased back in 2012 but only the Intel had many hours on it as Samsung came out with the 850 Pro pretty quickly and I upgraded. So I'm just looking for them or one of them to fail at any time. I have never had an SSD Fail so I figure I'll get to see how they fail what warning signs are given before they fail etc.
I agree with most others especially with Spinners that RAID 0 is risky, even with my SSD in RAID 0 I have extream back up going on.and no OS on it. Spinners are too cheap now days 1TB less than $100 for high-end hard drives. I'm currently using 3TB hard drives for back up Fantom Ext eSATA and 1 now on USB 3.0 Still don't trust USB 3 but so far its working on that one computer. top end cost me less than $150 3 year warranty.

Yes should be about twice as fast have you run and bench test on it yet.

No I haven't....I probably should.

This is one of my 1TB WD Black hard drives it partition into D: and E: I just ran the D: to give you a reference 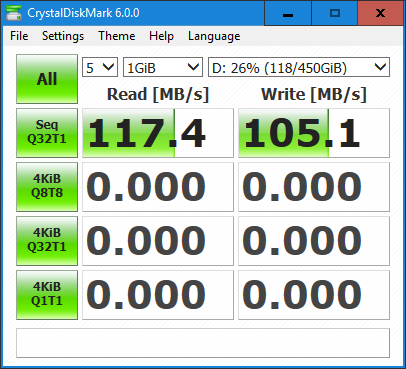 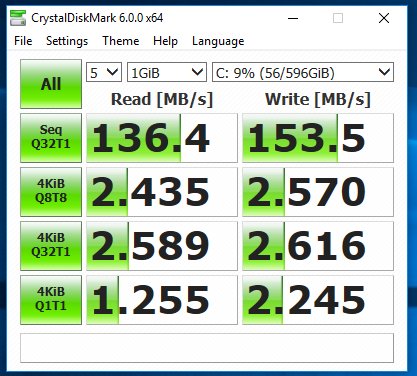 not a huge difference in reading but a good bit faster writing, although these WD Black are very quick drives for spinners
What really matters is actual transfer speeds which is hard to nail down other than what windows reports during transfers again we have to deal with the slowest drive, these WD Black on large file transfers will get between 40 and 60 Mbs fluctuating transferring a large folder of data by actual files sizes.
Ad

Compared to yours....no it's not but compared to my old 500G 5400 spinner I was using. let me tell you.....It's a big difference in the speed/feel. I didn't take a bench test of the old drive (I never thought to before the switch) but going back to these 7200 rpm spinners......I'm noticing a real big difference. OH why oh why didn't I do this sooner?

Thanks for all your input and help Clintlgm.
Ad