This is more a curiosity and an annoyance than it is a problem, but perhaps someone knows the answer. I'm new to Windows 10 and have been trying to get it to look and behave as I would like. I've found that my options are much fewer than they were in Windows 7 (or maybe I just haven't found them all yet). In any case, the first thing I hated was the configuration of the Start menu. I've figured out how to banish the (ugh) tiles, but now I'm perplexed with the limited ability I have to customize what is left. I have figured out how to organize the items I put on the system into folders of my choosing. But I'm still plagued by a plethora of what I think are called "universal aps." I have located (in several places) instructions on how to remove them from the Start Menu, one by one. But all the instructions say, in essence, "here's how to get them back if you change your mind." All well and good. However, all those instructions have a single command to restore ALL of the removed items in one fell swoop. Result? I go through and painstakingly remove all of the ones I don't want, one by one. Then, I decide I want one of them back. Great. Now I get them ALL back, and must go through again to remove all the ones that I removed before, and never wanted back to begin with.

Thus my question. Is there a way to restore these aps, one by one, the way they can be taken off, or are we stuck with an all-or-nothing procedure?
Ad 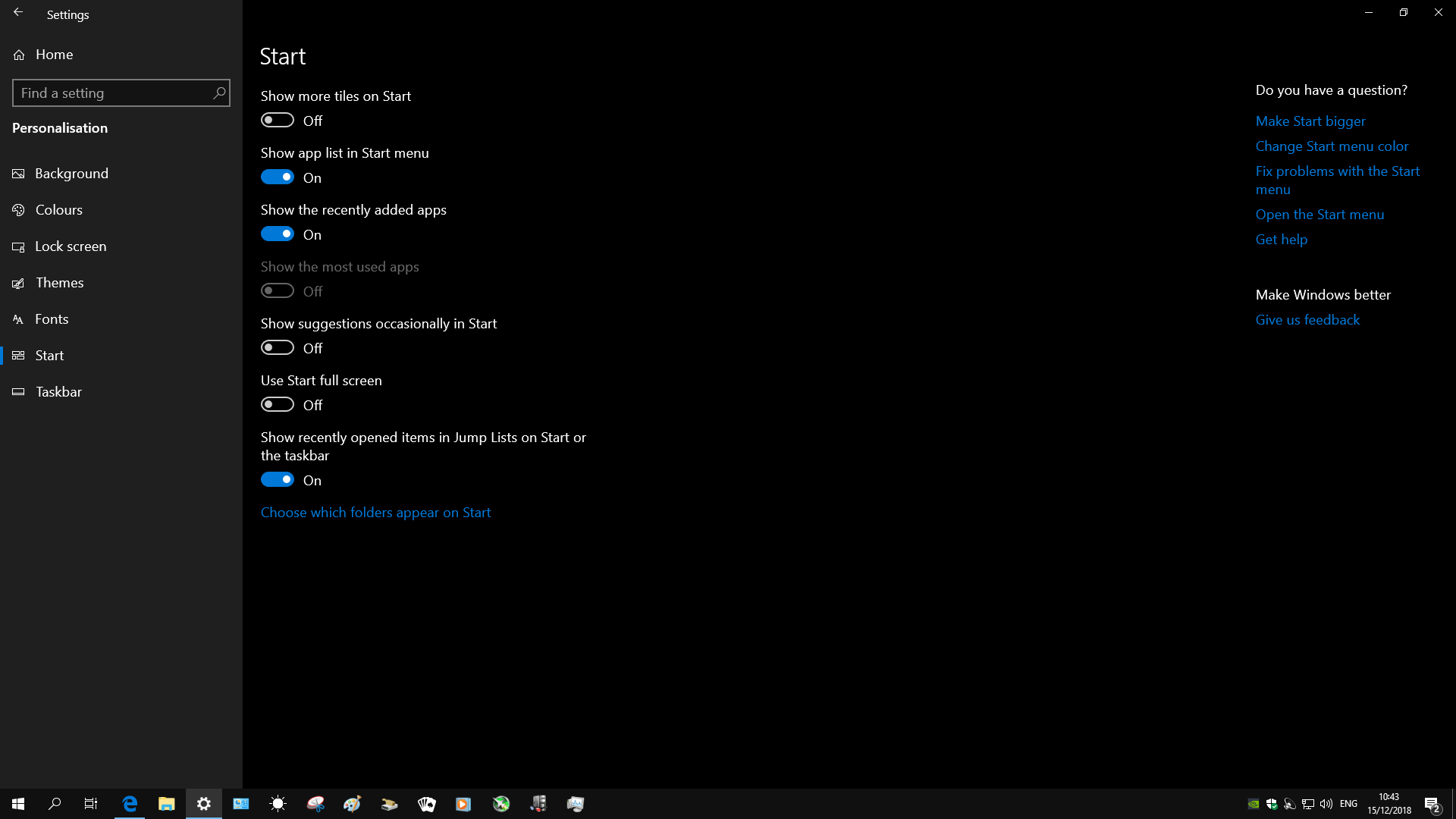 Click on "Choose which folders appear on Start" for more options.

http://classicshell.net/
Have you tried this?
R

Wolfie, No, hadn't found that (I'm still groping my way around Win 10). Looks like the combination of OFF for the Show App List and ON for show most used apps MIGHT do the trick. I'll experiment a bit with that. Thanks.
R

jmccleary50 said:
http://classicshell.net/
Have you tried this?
Click to expand...

Jmccleary, I found it when I was searching for how to clean up the Start menu. Have downloaded it, but haven't actually installed it yet. Wanted to find out if there was a way without an addon, first. But will probably give it a try. Appreciate the input.
R

Wolfie, Well, tried that, and apparently, the "apps" they are talking about in that option are the ones that I install, NOT the so called "Universal" apps that are part of Windows itself. I had already pretty well figure out how to manage the ones I installed. It is that long list of "Universal" apps that are driving me crazy (things like Maps, 3D Viewer, etc. If I could find a command to restore one individually, without bringing back all the others I had previously removed, I could live with that (of course, I may HAVE to live with it, even if there is no such command). Appreciate the suggestion.
Ad

have you snooped around in Apps & features at all?. 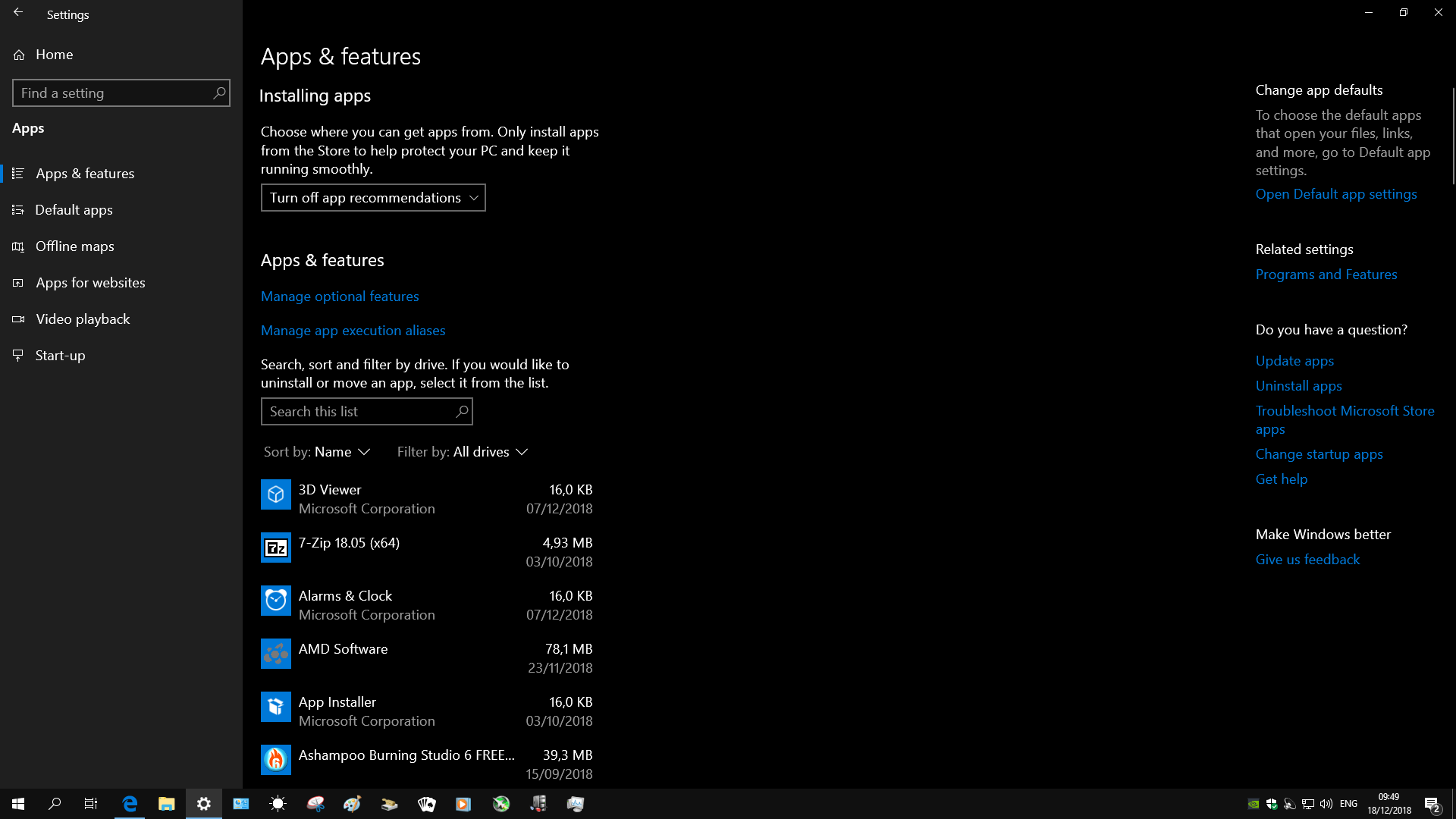 Wolfe-- Well, that looked promising. However, sort of went in a circular loop. All the ones I'm interested in banishing have the MOVE and UNINSTALL buttons grayed out, and after some digging around, I'm back to the instructions for removing "Universal" apps, that give a line to be entered at the Power Shell prompt. Can probably do that, but those instructions go on to say, no problem if you change your mind; here's the command you enter at the prompt that will bring them all back. Here's my dilemma. Let's say I get rid of nearly all of them (which wouldn't be far wrong), then I change my mind, and want ONE of them back. The command they give to restore brings ALL of them back. So if I get rid of 10, then decide I want one back, I enter the command, and get them ALL back, then have to go through the process to remove the offending nine again. If it were up to me (and of course, it is not), I'd have one command to get rid of them all, then individual commands to bring each one back. But apparently, just the reverse is true. What I was looking for was an individual command to restore an individual app, similar to the one that removes it. But apparently, there isn't one. Let me rephrase that. I haven't found anything that says that there isn't one--just can't find anything that says there is. I may just give up and give the Classic Shell that jmclearly mentioned a try. What I'd LIKE to be able to do is make a single folder, then put all the apps in that, so I have one entry on the Start menu (under A) that says Apps, instead of having the strewed all the way down the Start menu in alphabetical order.

I understand what you want but I don't really think it is possible as MS makes sure that its apps are bundled so the average user cannot just remove certain apps. This is one of the poorer points of Win 10 unfortunately!.

That said, this might help you but I have no idea about how one would re-install a single app:

I understand what you want but I don't really think it is possible as MS makes sure that its apps are bundled so the average user cannot just remove certain apps. This is one of the poorer points of Win 10 unfortunately!.

That said, this might help you but I have no idea about how one would re-install a single app:

Wolfie-- Actually, that's exactly what I was looking for. Admittedly, it's an ungraceful, awkward procedure, but it's also not something one would need to do every few hours (or even days or months). The procedures there were pretty much the ones I had found elsewhere, EXCEPT the article you found has a command to remove all, and commands to remove just one, as well as a command to restore all, and commands to restore just one. I had not found that, though common sense told me that if you can remove one, and you can restore all, logic says that there must be a syntax to do the opposite, that is, remove all, or restore one. I'll need to do some experimenting, but I think this gives me what I was looking for. Thank you very much for pointing me to the answer.
Ad

I didn't read the whole link I posted, maybe I should LOL.

If it solves your problem, please mark the thread as solved so it helps others.
Ad