Hi,
A friend (who has installed win10 onto his win xp PC and is using classic shell but struggling with the new experience of 10) was following my simple steps to download a screenshare exe file and see if it showed malware as I am seeing in Virustotal.com, Firstly he set the download file option to 'ask where to save it' in Chrome, Edge and Firefox. Downloaded the file though it saved without asking him. He found it on C drive. He then inadvertently double clicked the exe, it installed, so he wanted to uninstall it, he went start > settings >control panel >programs and features, right clicked screenleap and chose uninstall, it got so far and got stuck, he went back to desktop also a rotating ring, pc not right, so rebooted PC. Go back in there to that list again and all the progs are now gone, just says Microsoft OneDrive. He tried launching Msoft word and it was ok, then a few other progs, all ran, so the screen saying 1 prog installed that sounded scary did not denote that he had uninstalled everything !

and now Chrome has appeared in that pane to keep Msoft OneDrive company !

What has happened and how can he get his programs list back ?

DBenz said:
A friend (who has installed win10 onto his win xp PC
Click to expand...

Not sure exactly when he moved the PC from XP to Windows 10, but....
To the best of my knowledge there is no direct upgrade path from the former to the latter, so....
Has he reason to expect that the Programs and Features applet in the Control Panel should be showing a lot of installed programs?
Has he installed a lot of programs since the switch-over?
I wouldn't and he shouldn't expect programs that were installed in XP to have survived the Upgrade intact, nor would I expect to see them in the installed programs list.

Having said that...
IF this is a recent occurrence my first and possibly only suggestion would be to perform a System Restore, to a point in time prior to this having happened.
D

Hi,
he doesnt back up the PC, doesnt know how, so unless the PC does its own restore point he wont have one to restore to.
Does win10 create auto restore points, seems a good idea !

he had a list of progs in the programs and features pane, then after scrolling down them and right click on screenleap.com and choose uninstall and getting a rotating circle and Pc hang, after reboot and going back to them (the program list) they were gone. replaced with wording 'Microsoft OneDrive'.

He has not just updated, I am not saying the update to 10 suddenly caused this same day, but that trying for an uninstall, then reboot pc, saw what was there no longer there, all his progs ! though they run, so not nuked.

Yes...
OR
At least it's suppose to.
Just right click the start button and choose "Run" from the context menu
In the "Run" dialog box type
rstrui
hit enter or click OK
That should produce this 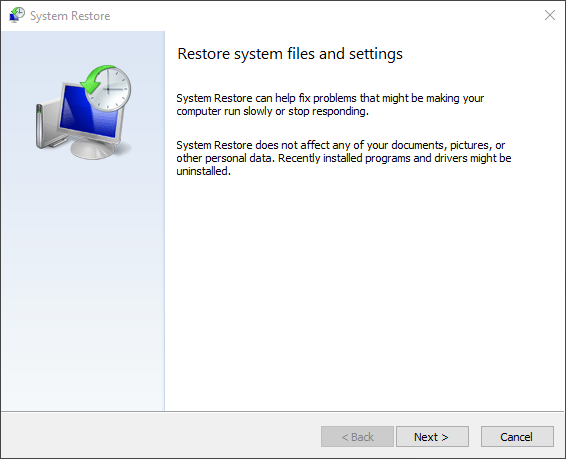 From there you should be able to see if there are any. You can also use the "Show more" button to see any older ones there might be.

There are endless posts and articles on how to use the System File Checker.

Failing all of the above you might consider performing an In-Place Upgrade / Repair
AGAIN there are multiple resources that explain the process, such as

How to Repair Windows 10 with an In-Place Upgrade. - wintips.org - Windows Tips & How-tos

It takes a while and is generally considered relatively safe preserving your data, programs, drivers, profile, etc.,
BUT
Still I would make sure all critical data was backed up and secure on suitable external media.
Ad

Hi,
Thanks for the reply, I shall try this out with him, the restore point is the hopeful one, as its set to make these by default. Else try the others.
Most Grateful to you.
Lets hope I report back with good news.
Thanks
DBenz.