Hi everyone. I'm a newbie here, and this is my first post. If I do something wrong, please forgive me.

It's a very long story, but I'll try to be brief. I saw a post or two similar to my problem, but not quite.

I have a Dell Latitude E6500; it's a 32-bit system. I replace the HDD with a Seagate 500 gig; there are no other physical drives in it. It has worked perfectly for several years. Among other things, it was loaded with Win7, lots of Microsoft programs and other stuff. I was happy. However, the free upgrade to Windows 10 came along, and after some time, I succumbed to upgrading. After a while, I came to like Windows 10, and things were good.

A few months ago, I noticed something from Microsoft was being downloaded, and it seemed extremely slow. As it turned out, the download was extremely large. Whatever it was, being that large, I didn't want it- my mistake, and I can only claim ignorance. After a few days, I learned it was a mandatory update that I could not cancel. During the process, it rebooted a couple of times, more or less, but always came back. There was a blue screen a time or two, but a power off-on allowed it to boot again.

One fateful night, I simply could not get it to boot. I eventually got to the machine's diagnostics, to discover that the HDD had a bad sector, corrupt file, or something to that effect; I don't recall exactly, now. I didn't have a bootable disk, and no way to make one, so I was dead in the water.

At some point, I borrowed a laptop from a friend, put the HDD out of my Dell laptop into my BlackX USB external drive, which also has a 1 TB drive for storage, and connected it all to the USB port on the borrowed laptop. I had the foresight to copy my data from the 500 gig Dell drive, now in the Black X USB device, to the 1 TB storage drive.

Using Seatools, diagnostics confirmed the previously reported errors. After repairing them, I put the 500 gig drive back into the Dell and tried to boot it. I got a boot error, but I don't recall the number. In addition, now the borrowed laptop would not boot. I put the 500 gig drive back in the Black X device, and left it connected to the borrowed laptop.

Through a totally accidental effort, I found that I could make the borrowed computer boot using a certain sequence, which is nothing more than hitting ESC, then boot sequence (F9), choose the 500 gig drive, and it would boot. Using Windows Explorer, my original 500 gig drive, still in the Black X, had files with country language names, such as English, but nothing else that I could see. The 1 TB, also in the Black X, did not seem to be changed. The HDD in the borrowed laptop, had all the Windows files and applications as before, including login, etc. Another way to say it is that with the exception of the unusual booting procedure, the borrowed laptop seems to work perfectly; by the way, it is a 64-bit system.

My questions and problems:

Thanks. Sorry it's so long. Please help if you can.

10:21 PM Awh, man! Wouldn't you know it. I switched to my 1TB drive to save my password, etc, and I get a message saying it was inaccessible with corrupt files. Lord have mercy!
Last edited: Mar 6, 2018
Ad

firstly, get an adapter cable from somewhere to read your disk and save your data:

Use Gparted for partitioning but be careful with it!:

Create a bootable disk/USB stick and boot from it!.
F

Thank you for getting back to me so quickly, Wolfie. I appreciate your assistance.

Looking at your suggestions one at a time,
1) ...firstly, get an adapter cable... Isn't that where I am with my Black X USB device? I have my Dell 500 GB drive and my 1 TB drive plugged into in. I verified I boot from the 500 GB Dell drive, currently, via the USB drive, by removing it from the USB box, leaving only the HDD in the borrowed laptop, plus the 1 TB HDD data drive, also in the Black X USB device. No matter which drive I select, from the F9 menu, it only will boot from the 500 GB drive.
2) Use Gparted for partitioning... If I add a partition to the HDD in the borrowed laptop now, will I not blow away all the borrowed computer's files. I can't do that, since it isn't mine. If I add a partition to my 500 GB Dell HDD, won't that blow away my boot file on it I'm currently using?
3) ...Create a bootable disk/USB stick and boot from it!.... I already boot from a USB device. I think I must be missing something about how all of this helps with my problems. I'll re-read it.

EDIT-- How can I determine what happened to my data drive? It shows up as D drive, but I get the "...inaccessible..." message when I click on it. Each time I boot the computer, I get a message saying it is scanning and fixing errors.

the adapter cable can be use to read the drive via a different computer without the need to boot from it (the HDD).

Create a USB stick to boot from and you can use it to repair your W10 version and still keep your files intact!.

You can also re-install W10 and keep your data (you will lose any apps installed):

Did you encrypt the drive at all?.
F

Thanks for getting back.

No, neither the Dell, which is my computer that messed up first, nor the HP computer I borrowed, is encrypted.

Coincidentally, my wife bought a new computer over the weekend. I connecter the 1 TB drive to it, via the USB box, but Windows explorer still shows it as inaccessible and corrupt.
Ad

I don't really know?, it might be that the drive is simply damaged in some way but I cannot say for certain?.

Open Computer Management > Disk Management and see if the drive is at least showing there: 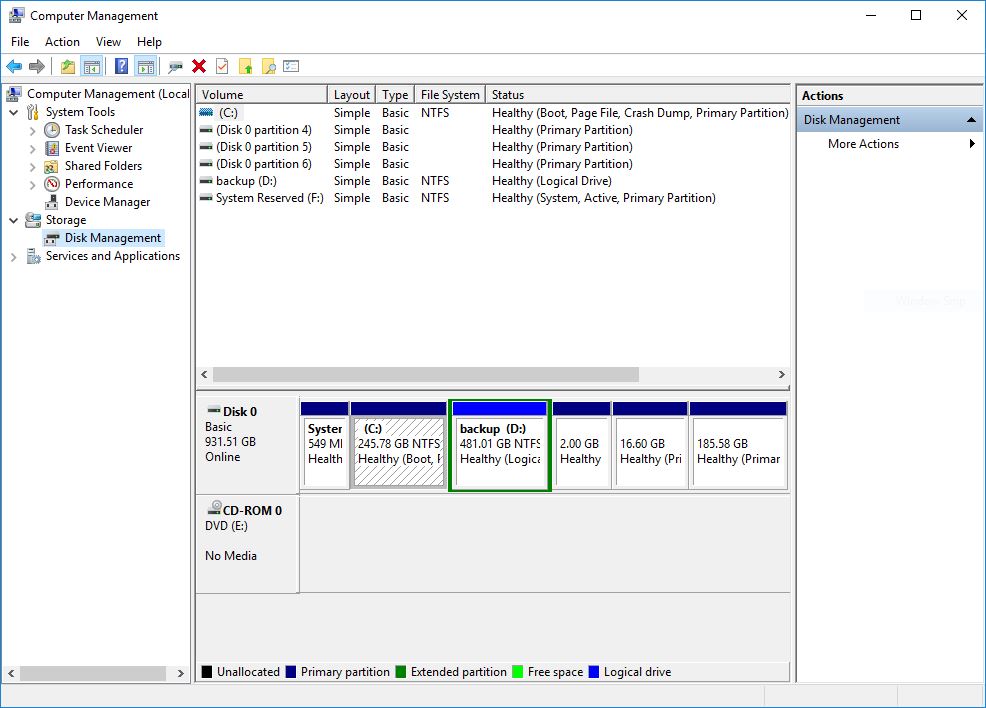