Hi Tim, would you happen to know the specification of the RAM stick that you added?
I have tried two identical RAM sticks, same as the one attached to the Motherboard with no success, albeit Lenovo say the Maximum RAM which can be used is 12Gb.,
Do you have an hardware program like "HWINFO64" (which is free) to confirm whether your memory's "MODE" is single channel or Dual channel ???.
Regards, John P.
Ad

Bighorn said:
When I come across a computer with a 4GB RAM Module I put in a 2GB or a 4GB [correct for the make and model] in an empty slot then in the BIOS assure it's set for Dual-Channel [sometimes automatic sometimes not], two modules are required to get it.
Click to expand...

Hi Bighorn,
My computer only has one additional RAM slot, within which I have installed a 4Gb RAM stick identical to the 4Gb RAM stick attached /soldered to the Motherboard, and my BIOS tells me nothing !!!!.
Can only access BIOS by pressing the "NOVO button" on the L/Hand side of Laptop adjacent the memory card slot, When the Laptop is "off", so cannot take a "screenshot" and photos I have taken (jpeg files) are too large to allow me to attach !!!.
Regards, John P.

For the images one can still use Paint/MSPaint to Resize [look in Start, W section, Windows Accessories]. I just keep putting 50 in the size box to reduce to an acceptable level, sometimes takes a few tries, reduces the image size and the resultant file size.

It is possible the available slot is malfunctioning and the added module can't be recognized.
P

HI Bighorn,
I suggested that to "Lenovo support" and received a reply ( see message #17), and I will try to reduce photos with "Paint"
Regards, John P.

Unfortunately most things fastened to a mainboard/motherboard aren't easily changed, usually require a replacement board. I lay out the cost-effectiveness thing when explaining the possiblities and compare a 'fix' against the cost of a new machine, either Notebook/Laptop or Desktop. Playing a part in which way to go is with those using a SmartPhone which in itself is pretty much a computer so people have to make choices, all depends upon their needs versus affordability. As to that affordability I've gotten 2 Renewed/Refurbished Notebooks from TigerDirectB2B, each less than $150USD with free shipping but there was sales tax, 12.5" with 256GB SSD [for use during chemo treatments] and 13.3" with 128GB SSD, both with 8GB RAM and Win10 Pro x64. Both with 1-year warranty.
P

Did you disable the internal battery? It may be required to trigger searching new hardware in the Bios. When the machine starts back up.

Windows will work fine with 4GB RAM whether 64-bit or 32-bit. The 32-bit versions won't fail when having more than about 3.5GB, just may not show or use the full 4GB [I have a couple that way as I had surplus modules to test with]. System Requirements are x86/32-bit of 1GB and x64/64-bit at 2GB albeit double the requirement does make Windows and programs work better/faster. I've recovered/repaired some Notebooks and use the maximum-supported whenever possible without spending more money, usually parts salvaged from otherwise junk machines.

The issue with the BIOS is that the Operating System reads it to determine what it has to work with, if the BIOS doesn't see things properly neither will the OS.
P

Did you disable the internal battery? It may be required to trigger searching new hardware in the Bios. When the machine starts back up.

Hi Clifford,
I turned the internal battery off (as per the video) for an hour, and then re-started the Laptop using power supply cable.
The result being exactly the same as previously !!!!
The only suggestion I haven't tried to dote is accessing the CMOS battery and disconnecting the same for ten minutes and then re-connecting,
and seeing if this rectifies the problem that I have?
Regards, John P.

Usually there's a setting on the exit menu in the bios where you can load optimized default. You can give that a shot before removing the battery.
P

Checked the BIOS and "optimised default" is enabled, being "UEFI" as opposed to the other option being "Legacy".
Disconnected CMOS battery for ten minutes and reconnected.
Still obtained the same results............Additional RAM not recognized !!!!!!!!
Regards, John P.
Ad

All the things tried does boil it down to the module socket being bad, doubtful if 2 or more modules would be bad if practicing safe handling of them.

I'm with Bighorn. Seems as if the socket is bad.
V

Should tell you right in SPECCY under operating system . 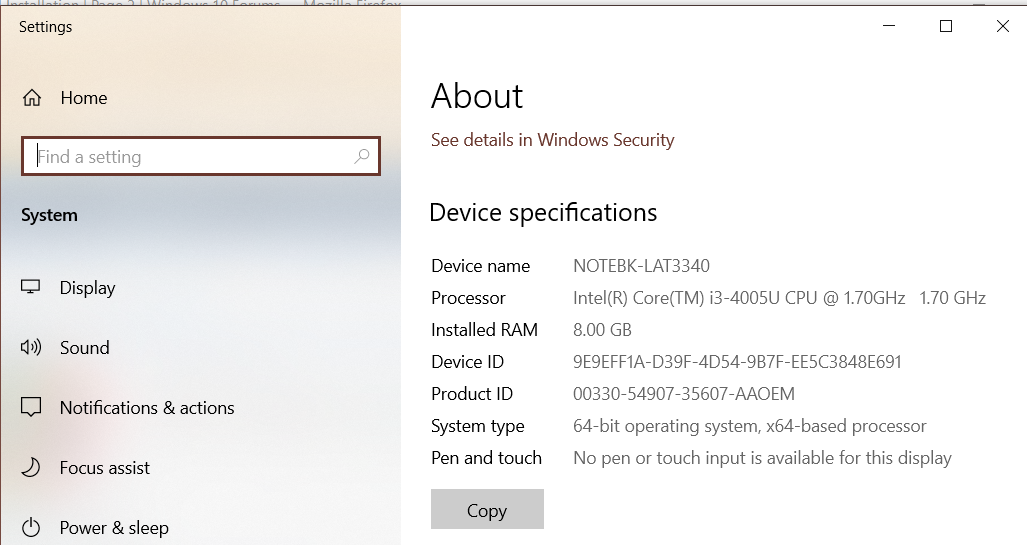 Hello guys, I don't know if anybody will see my message after a year.
Anyway, my Lenovo Ideapad is the same (Ideapad 310-15ISK) as Pob786 have, just as I live in other country, my specs are different.
It came with Intel Core i5 6200U and 4GB of RAM soldered to MB and an additional removable 4GB of RAM in second slot.
One day I realized my PC is running much slower as in the first years, then I realized, I am using only 4GB of RAM. I have never touched the removable RAM before, so I don't even have a guess what and when happened, that suddenly the removable RAM was not recognized.
I bought a new RAM, to my knowledge it should have been a compatible one, AND magic happened . Sometimes it worked, sometimes not, also with the original RAM, when I removed it and put it back, sometimes it showed 8GB, sometimes only 4GB. However, when I was on my PC working, with 8GB of RAM, after few days it used to go into BSOD, probably because while the PC was running, something happened to the removable RAM and it disconnected. After I restarted the PC, only 4GB were recognized.
Now I resigned and I am running on 4GB of RAM which is quite painful since it is mainly eaten by chrome .

My guess is that the motherboard is not ok and the slot is damaged. If I am right, the motherboard needs to be replaced, which is not economically feasible.
My last guess is that the updated BIOS version (latest is 0XCN45WW) could mess up with my PC, as I have read in some other forums. Now I am trying to flash older BIOS versions and I will see what happens. I could download the 0XCN44WW, 0XCN43WW and 0XCN37WW. So now I am on 0XCN44WW and it seems no magic happened .
Other thing which irritates me is a noisy fan, which also could be connected with an updated BIOS version. I hope at least one of these problems will be solved by going back to the older BIOS version.
I remember when I was updating to the latest BIOS, however, I do not remember what was the original BIOS version and I could not find it anywhere on the internet.
Ad