Hi guys, recently I upgraded my Windows 7 to Windows 10, but then I noticed my internet was not working, no networks were showing as if the network adapter wasn't plugged in. I tweaked around some stuff, until I changed my 802.11n USB Wireless Lan Card's driver to Ralink (There were 3 drivers, MediaTek, Microsoft and Ralink). The internet worked, and I was connected to my network. However, when I played a multiplayer game, I noticed there was a lot of lag, and assets didn't want to load. I switched to Microsoft's driver, and now it didn't even want to connect to the game. Before I upgraded, the MediaTek driver was working fine, and my internet was better than what I get using Ralink's driver. But if I try to switch back to MediaTek, it just doesn't show the networks. I would appreciate it if someone helped.
Ad

What's the exact make/model of your USB wifi adapter?
R

How can I check that? I looked in properties of the wifi adapter and I'm not really getting any useful info other than the manufacturer is Ralink Technology, Corp

rogernice said:
How can I check that? I looked in properties of the wifi adapter and I'm not really getting any useful info other than the manufacturer is Ralink Technology, Corp
Click to expand...

Look in "Device Manager" under "Network Adaptors" you should have something like this “Ralink XXXX Wireless Network Adaptor" then go to Ralink web page and get your Ralink's model latest Win-10 driver. But and before you install any new Win-10 driver(s), delete all your previous drivers from your system, to do this, go to "Device Manager" and right click on your wireless network driver and "Uninstall Device" and completely uninstall that devices driver, also check if you have any drivers in "Control Panel" under "Uninstall a program" in the list of drivers, if you do then uninstall that too. Then, install the new Win-10 driver for your Ralink's model Wifi and latest driver.

Note: if you’re having problems with either Wifi or BT drivers you have to completely uninstall all previous drivers from your system before installing a new driver, especially if you've updated from Win-7 to Win-10 as there could be conflicting drivers that are causing errors with the Win-10 Wifi or BT drivers, try that.
R

This is my network adapter, the one that is in the red rectangle: 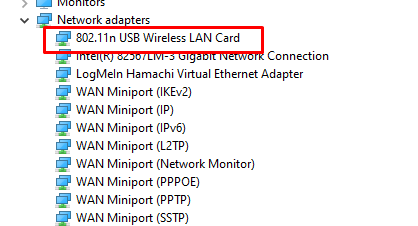 If I go to its properties, then this is the only info I get: 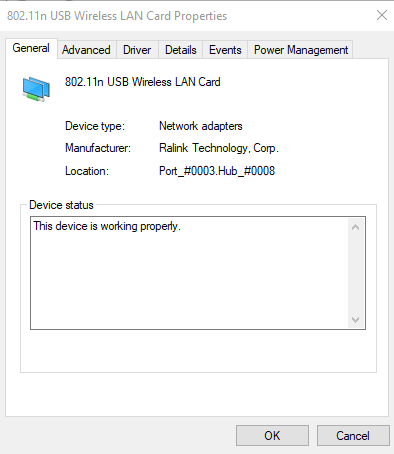 Go to the "Driver" section where you will get all the info on the "Ralink Tech Corp" driver and update it accordingly but, uninstall the driver you have and either update it the newer driver or just install the existing one that you have, as it seems that your existing driver is corrupted and needs to be refreshed.
Ad