Can I re-install Window 10? My previous trial, crashed my computer.

I am using ACER 2008 and last time I downloaded Window10 but it kept on crashing my computer - Blue Screens. So, I took it off. My questions are:-
1. Is my computer compatible with Win 10? 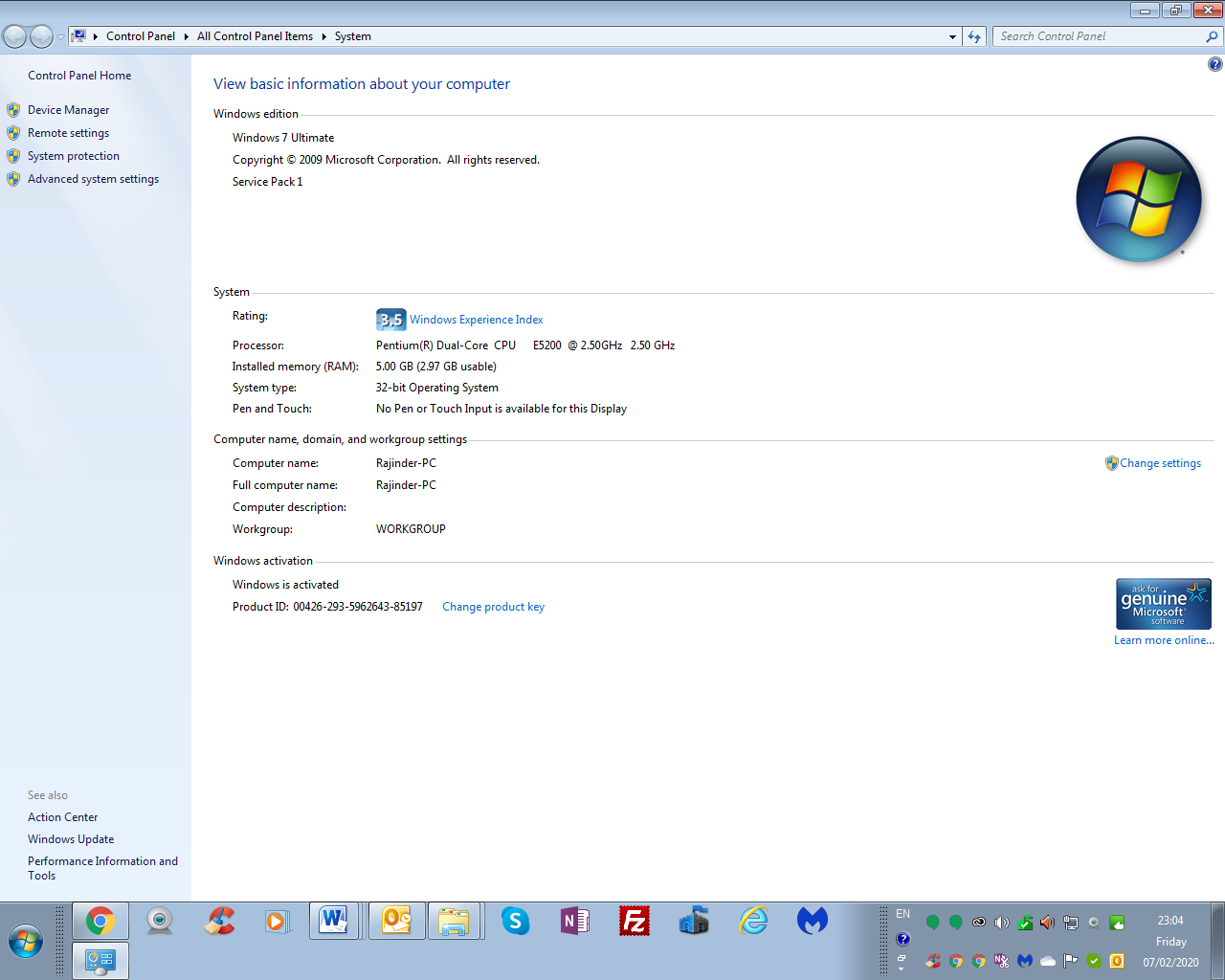 If it can take Win 10, I would appreciate. Present one Win7 Pro.

That PC is a little old and has a very old chipset (I am guessing ICH6). You could try to use a 64bit system as you have a dual core cpu. BTW: it is a E5200, not a ES200) However I am afraid that your CPU / chipset is too old hence the continuing crashes. It might not fully compatible with Windows 10

Or you could try the 32 bit version of Win 10 if you haven't already!.

Too much crashing is no good for me. Anyone experienced a problem with their old PC?

I have. The laptop am writing this from was build in 2007 (with Windows XP) and I am using currently build 1803 which is at the end of life already. The problem with this one is that I cannot update any further as with a newer system I am having so many issues that working with it becomes unbearable. So it stays on this version until it brakes down...

Rajinder Nijjhar said:
Too much crashing is no good for me. Anyone experienced a problem with their old PC?
Click to expand...

On older hardware, it is worth investing in an SSD which helps a lot with speed even on older systems!. I am currently using an old laptop with 4GB RAM and have tried using an old SATA HDD and a newer SSD and the difference is very noticeable and worth it!.

Wolfie said:
On older hardware, it is worth investing in an SSD which helps a lot with speed even on older systems!. I am currently using an old laptop with 4GB RAM and have tried using an old SATA HDD and a newer SSD and the difference is very noticeable and worth it!.
Click to expand...

Absolutely agree. A SSD gives old hardware a performance boost that I had not expected. Now I do not even run HDD's anymore.

Another thought for you Rajinder is to try a version of Linux, https://www.linuxliteos.com/download.php is your best bet. Take a look and see how that runs although you may find it hard to find 32 bit versions of Linux these days!. There are many lightweight Linux distros that not only let you enjoy lag-free computing experience on your old computer but also give you a visually appealing graphical desktop. From a variety of options, you can choose the smallest Linux distros like Puppy Linux, Bodhi Linux, or Linux Lite. In...

Yes, even tho old your system is Windows 10 compatible. It might be slow. the first thing i would do is update all drivers and bios then use MediaCreationTool to let MS do the upgrade for you... and if you still get a crash -post back with the error code and the .dmp file.

The CPU should be able to handle 64 bit systems according to Intel!:

The CPU also has "Execute Disable Bit" which would/should allow a trouble free installation of Win 10.

Execute Disable Bit is a hardware-based security feature that can reduce exposure to viruses and malicious-code attacks and prevent harmful software from executing and propagating on the server or network.
Ad

You can upgrade your Socket 775 E5200 CPU to the more powerful E8500 or 7200 (if you can get one from either eBay or Amazon?) as they will not be too expensive and their upgrade probability are between 91 to 96% to your motherboard and system, this will give you allot more power to run Win-0 64bit, also, you can upgrade your 5GB OEM DDR2-800MHz to the more powerful DDR2 PC2-1333MHz RAM to 8GB (which Win-10 64bit will utilise 100%) and also upgrade to an SSD. These are all upgradable options that are not very hard to do and it will improve your laptop 1000%.

The problem in doing all this is this, the above upgrades could cost you up to USD $200 (which not too expensive) but, do you want to invest and/or go to this length to upgrade an old laptop that is not compatible with Win-10 and whatever you do to it, it will always struggle to keep up? As investing $350.00 in another second hand Acer laptop that is a few years older e.g. 2012 to 2014 would be a much better investment, especially if its got a dedicated GPU, SSD and an i5 or i7 CPU, which will give you a much better system to run Win-10 and enjoy hassel free computing.
Last edited: Feb 12, 2020
P

My computer is showing WHEA errors with blue screen . What will i do?

There shouldn't be any issues with Windows 10 running on that hardware. I've run it with the same cpu on a laptop. I'm also running the 32 bit version on a 1st gen single core intel atom 1.6 ghz with 2gb of ram. A bit slow, but it runs stable. I'd try a clean install of Windows 10 instead of trying to do an upgrade.

Pavan1996 said:
My computer is showing WHEA errors with blue screen . What will i do?
Click to expand...

first off you should start your own thread and secondly, a lot more detail about your system and OS version would help!.

You can try a system reset:

Pavan1996 said:
My computer is showing WHEA errors with blue screen . What will i do?
Click to expand...

First of all, which laptop do you have e.g. model and number? As there are several common causes for a WHEA_UNCORRECTABLE_ERROR (we’ll abbreviate it as WUE), most of which directly relate to your system hardware:
The above are all the problems that you could have with your system! As I said before, older laptops might be adequate to run Win-10 but not all will give you a satisfactory, consistent and adequate experience for your usage and/or acceptable usage! Especially with the latest Win-10 v1909 and what MS will bring out and the complicated graphics of today.

As far as what "Bigfeet" is saying "I'm also running the 32 bit version on a 1st gen single core intel atom 1.6 ghz with 2gb of ram" yes me too but, 32bit is very limited these days and its also a very painful experience, especially if you persist and want to run 64bit with such a setup! I've got an "Acer Aspire One Happy 2 AOHAPPY2-13666 10.1 Netbook" that I've upgraded the 1GB OEM ram to 2GB and also put a Samsung 250Gb 850EVO SSD and its still very unacceptably SLOW on either 32bit but especially 64bit Win-10 systems, even though that its got the "1.66GHz Intel Atom N570 Dual-Core" and the very limited "Intel GMA 3150 Graphics" (which supports a maximum of 1024 x 600 resolution, which is not adequate for Win-10) but it can be tweaked with a software called 'NewRez" to 1280×800 but, its still pretty hopeless and inadequate and these are the problems that you will have with older laptop.

In my opinion the minimum spec for a Win-10 OP system laptop and/or computer to run adequately is an Intel i5-2540M, HD3000 integrated graphics (if you have a dedicated graphics its even better e.g. GeForce or Radeon and 2GB+ mem) and with 8GB RAM PC3-10700 (667MHz) and an SSD hard disk is essential and a must, otherwise you are wasting your time and your system is at and just, a minimum internet usable browsing tool. Older laptops are just adequate for Win-10, don't be fooled, because and with spending a little more, you can upgrade to (as I've said before) 2013 to 2016 laptops for a very minimal cost that will give you a much longer and better experience with Win-10, I speak from experience with upgrading 8+ year old computers and laptops which and if you upgrade them correctly e.g. their CPU's GPU's, RAM and SSD's and even a motherboard (not a new one but an upgrade of the same or latter model) they work wonderfully and quick with Win-10.
Ad