SOLVED "f" and "r" Folders in My C:\Windows Directory

Many of the folders are empty while others have one or two DLL files in them. I think that most of the "f" files are related to the Windows 10 updates but I'm not sure. And I cannot delete the \Temp\Inflight\... folders. I've tried a few apps that I got online to delete them but the apps just leave them in place.

So, what are these files and can I safely delete them? I'd be interesting in knowing if others have over 66,000 of these folders like I have...
Ad

I have them too. I have three "Package_for_RollupFix..." subfolders. The Date Modified for these are in October, November and December so I suspect they are the dates that I ran Windows Updates. Perhaps they contain data that would be used to roll back to a previous update if necessary, but that's just a guess. I'm going to leave them alone - my entire C: drive only contains 166 GB (I don't store my data on C
S

There's something wrong with having almost 70,000 files each containing a couple lines of code...

The best thing is, you keep your fingers from the WinSxS Folder
Any modifcation there can destroy the windows installation
S

Thanks for the warning. I shall indeed heed it.

dism /online /cleanup-image /startcomponentcleanup
this will delete all previousy found files, it runs a long time to finish
Ad

Here are the results of the DISMs: 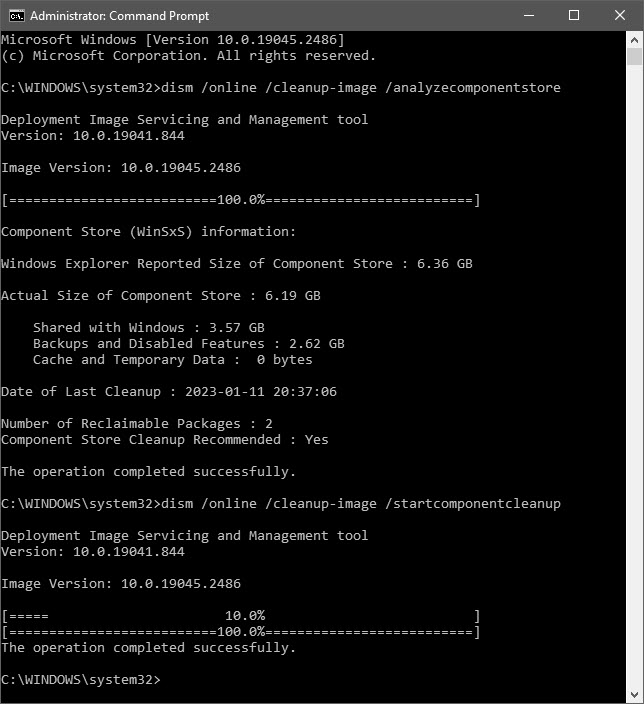 In this case they are not obsolete