I am just wondering if anyone has been able to try the "seeker" option to get the latest build. If you click on "Check for updates" you might see that build offered.
Ad

In case you have not been keeping up, the fast ring was able to update to 18362.xx without problems. Prior to the slow ring receiving the update, they were given a CU which messed up the 18356.16 folks so they could not update to the assumed RTM. Currently Microsoft is trying to work that out but have set up folks with earlier builds than 18356 to update to 18362 directly if they manually check for updates.

So far I have seen one person which tried that and the update failed at 35%. So, I was just wondering if anyone has been able to update directly to the RTM .. Looks like, so far, not many have tried if they were on an earlier build. Microsoft has not made any official announcements regarding the Spring build release, but this looks like it will be the third build in a row which had problems of some type.

Thanks for the response..

Saltgrass said:
In case you have not been keeping up, the fast ring was able to update to 18362.xx without problems.
Click to expand...

Since both of my IP computers are on the Fast Ring I had no need to keep up with either the Slow Ring or Skip Ahead.

As said in an earlier post, I rejoined the Insider program very recently. As needed, I installed from and older build. Sorry, not sure what number it was.
When I checked for updates, it offered 362. Downloaded ok, but, understandably, a rather long install. It did seem to stop several times, but I could see there was still HD activity.
Finally: 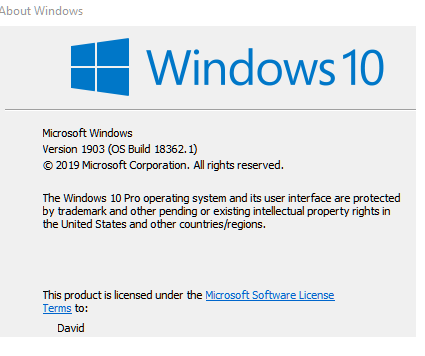 Thanks David, so it looks like it will work for others. That might mean they will go ahead and be able to release the build to the public since none of them have the CU which seems to have caused the problem.
Ad