SOLVED How to PERMANENTLY disable Cortana?

I have a Toshiba 64-bit laptop running Windows 10 Home, recently updated to that new Anniversary something or other. The laptop has 8gb memory and a 1Tb hard drive.

When I first went to Windows 10 I disabled Cortana because it was a waste of time and resources. Then when I installed this Anniversary update, it turned Cortana back on and I can't find a way to turn it off. I changed the registry according to info from another site that I've always found reliable but Cortana is still running.

How do I turn this thing off? Microsoft should not force resource hogs down people's throat.
Thanks for any help you can give.
Ad

I'm not 100% sure since mine's disabled using a 3rd party program, but I don't think the registry hack works with the creators update anymore. And even before with the registry hack, Cortana still technically ran in the background, because that's one way Windows 10 sends telemetry to Microsoft. Even disabling it with various 3rd party programs, it still runs as a process.

Type exit and press Enter key to close the console

You screen and taskbar with darken and flash for a moment, then return to normal. At this point close the Task Manager window.

Cortana ought now be stopped and a normal search in its place.

Note: Apart from working in the Anniversary Update, this will also work with the Creator update and also with the latest rs_prerelease for the Windows Insider Program.​

Thanks for the prompt response. And the detailed instructions were wonderful. I'm not very techie so I greatly appreciated that. I copied the registry entry out of your instructions above and pasted it into the Command screen.

I would be even happier if it worked but it didn't. I followed your instructions exactly. Cortana is giving Bruce Willis a run for his money. Talk about Die Hard. Wow!

I made some screen shots and attached them so you can see what I'm seeing.
And thanks again for those well written instructions. 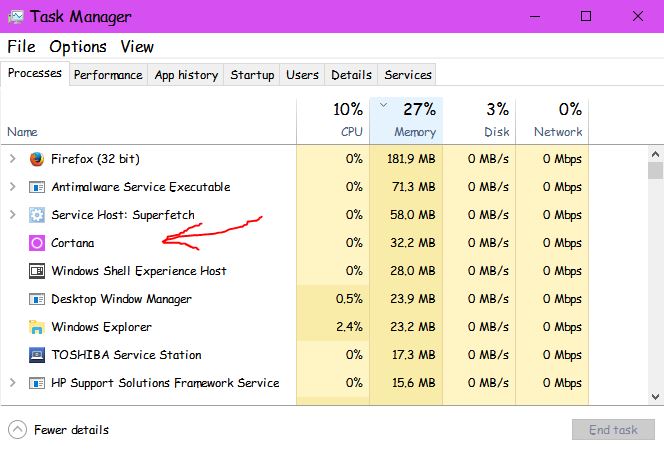 Morlaine this method FYI the link has been scanned with Malwarebytes Premium.

Norton, I agree with you about the Migraine.

Thanks for the suggestion, but in my original post I mentioned that I had made a registry change from another site that had always been reliable. The change I made was the same one you are suggesting and mine was also from howtogeek. Sadly, it did not work. And when it didn't work, I posted my question here.

Isn't there some other way to disable it completely?
Ad

Sorry for the confusion. I may be wrong, but, I don't think you can turn her Off (disable) completely. Users can shut her up or limit what data she sends to MS... I don't think MS will allow it to be permanently disabled or removed. My OS is Windows 10 Pro, I don't use Cortana, it doesn't bother or bug me in anyway, I just use Windows search (Cortana) in the task bar. What edition of Windows 10 are you running.

I have Getting to know you turned OFF. Go to Settings > Privacy > speech, Inking & typing. "Turn Off"

For some reasons we could use task kill to disable it for a moment, but the process would respawn shortly after it. The only thing that we can do is by uninstalling it, but i do not really know if its gonna be fully disable.

I'm running Windows 10 Home and I believe the last update was the Creator's update. I looked at System in the Control Panel but it only shows Windows 10 Home, no other versions or updates.

I didn't have any memory issues until after I did that update and the only thing, that I know of, that is running now that wasn't running before is Cortana. Every time I look at Task Manager, it's taking up memory if not CPU and I'm getting Memory Management errors (blue screens) that weren't happening before when it was turned completely off. And when I look and sort it on usage, it's 3rd or 4th from the top of the list. And my laptop's speed has slowed considerably, especially when I have 15 or 20 tabs open. I think it could be having an impact.

Plus, since it is my laptop, Microsoft didn't buy it for me, I should be able to decide what runs on it and what doesn't. Just my two cents.

That is very odd Morlaine.

My Task Manager is completely void of Cortana as a running process. It used to be there when I set Cortana up to see what all the fuss was about. Later when I decided I was not interested in using it, and Microsoft removed the toggle off button, I went into the Registry and made the aforementioned modification.

The result of that modification which I've since also used on Creator and all rs_prereleases shows Cortana fully disabled as you can see in my image below. 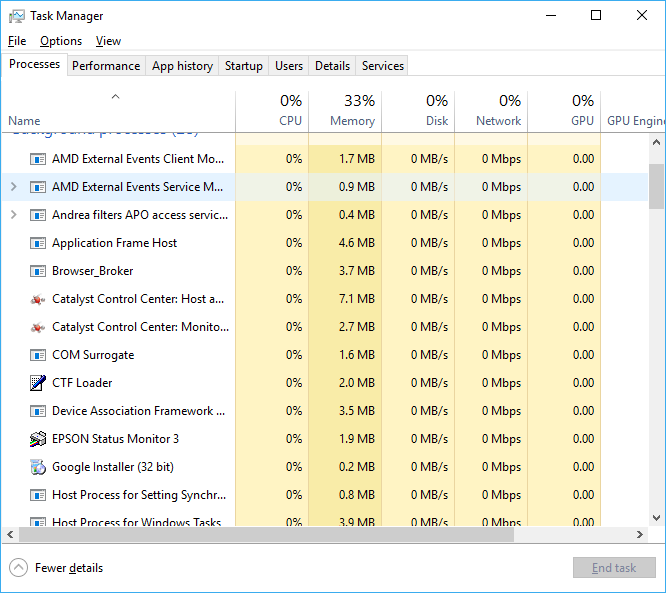 I'll need to think on what else may be causing it to Start in your case.


Have you tried checking Task Scheduler at all?

I found on Malekal.com that after modifying “ AllowCortana ” value that we have to change the value of two services : Tapisrv and WbioSrvc.

Here is the path : HKEY_LOCAL_MACHINE\SYSTEM\CurrentControlSet\Services\TapiSrv , then you change the “ Start ” value to “ 4 ”.
You do the same thing for : HKEY_LOCAL_MACHINE\SYSTEM\CurrentControlSet\Services\WbioSrvc , you modify the “ Start ” value in the right pane to “ 4 ”.
You close the Registry.
Then you open the Task Manager and you look for Cortana and Cortana Background Task, and you end the task for both. And restart your computer.

Before doing these modifications, I would wait for Regedit32's advices.

hope this will be helpfull.

I'm still bemused though given, I've purposely enabled Cortana on each build and tested setting policies to disable it and have not seen the re-spawning Cortana process occur.

In this case your website is indicating it is necessary to disable the Tapisrv and WbioSrvc services.

If you want to disable these you could just type services.msc in a Run dialog and click OK then right-click on Telephony and/or Windows Biometric Service and select properties then for the Startup type click the drop arrow and select Disabled

The TapiSrv is required to support devices and software working with telephones etcetera.

The WbioSrvc collects biometrics and shares these with other services. If you use a touch screen or one of those finger print sign-ins, I am not sure it would be wise to disable this service. If you don't then I guess it would be fine.

Even though I used the same command prompt code line as you provided, and then ending the task, Cortana is still there !
As you can see below 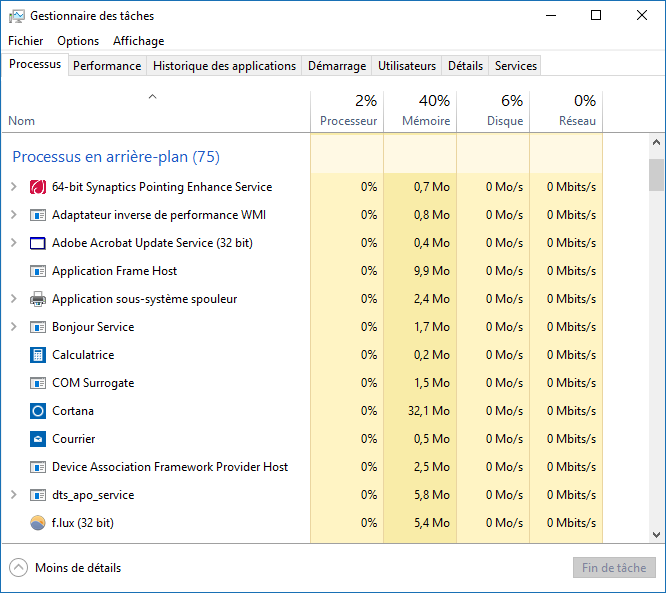 I didn't apply the two modifications on my laptop because Cortana doesn't bother me and I don't see any effects on the laptop' performance.
Thank You for your answer.

Have a Nice Day JAY B.

Interesting - which build of Windows 10 are you on Jay B? 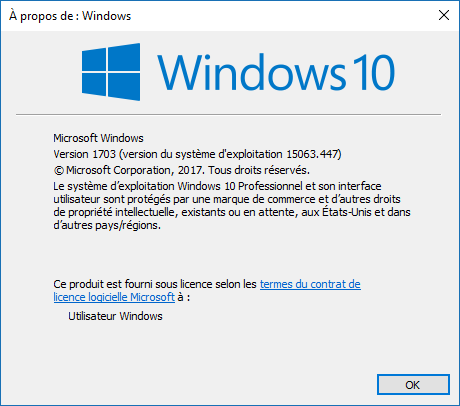 Hmm that is intriguing then because I tested that policy on that build and it worked fine.

As your website mentions these two services there must be something unique about that in different places as I did not need to disable any Services. It will be interesting to see whether or not disabling them works for Morlaine.
Ad

Hi Regedit32. I checked the Task Scheduler as you suggested and there is no mention of Cortana. Below is the version of Windows that I have.

Is there something else you think might work? Or do you want me to try JayB's suggestion? I'm up for most anything. 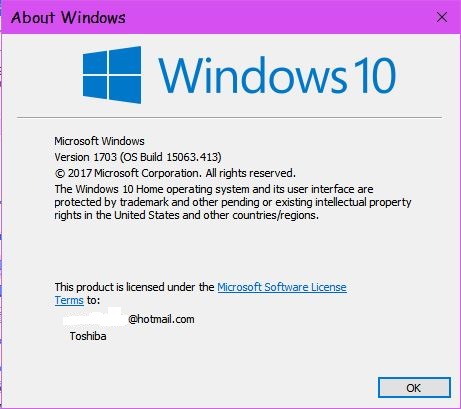 I could not think of anything else myself, but if you feel comfortable trying JAY B's suggestion go for it.

You can also re-enable either Service again if it cause any unwanted side affects.

I'm curious to see whether doing that - along with the policy in the Registry - actually achieves your goal now.

I'd test it myself, but as I have said previously, I've never had any issue simply using the Policy I offered you to turn Cortana off. So I cannot verify disabling those two services will work or not. But worth a shot for sure!
T

the bad thing is that as hardly any one likes it , those that be at windows won't let us get rid of cortana on OUR computers or egde either . it is disgusting that we had no choice but to down grade to windows 10 but then to have apps and crap we dont want forced on us is dispicible .
Ad

I'm really at a loss. I tried resetting the registry entries as Jay B suggested but no joy.
************
Here is the path : HKEY_LOCAL_MACHINE\SYSTEM\CurrentControlSet\Services\TapiSrv , then you change the “ Start ” value to “ 4 ”.
You do the same thing for : HKEY_LOCAL_MACHINE\SYSTEM\CurrentControlSet\Services\WbioSrvc , you modify the “ Start ” value in the right pane to “ 4 ”.
You close the Registry.
Then you open the Task Manager and you look for Cortana and Cortana Background Task, and you end the task for both. And restart your computer.
*************

I also followed the suggestions at this website, including changing the name of the searchui.exe file.

And amazingly, Cortana was gone even after I rebooted. Yippee!! But, then the other shoe dropped. When Cortana left, it took my Start Menu with it. The Start Menu would display but I couldn't click on anything, all the entries were grayed out.

If Cortana was a person, I would shoot them. It's invaded my home without my permission and won't leave. That's worth at least a couple of .38 slugs.

I'm open to any suggestions, other than bullets.
Thanks for your help.