Logitech keyboard with a random delay?

ive been using a Logitech K260 keyboard for years and ive noticed something strange since i updated to windows 10 (from 7).

Sometimes the keyboard seem to be unresponsive, nothing i type gets written, until some moments later, when the "keyboard buffer" is written into the text field.

Its somewhat hard to describe, and this happens mainly when i haven't used the keyboard for a while, but can also happen mid-sentence..

The keyboard will behave as its dead, no keypress is actually transmitted to the text input field, but about 5-30+ seconds later, it will write the last 5-15 letters i wrote.

I do not remember this issue in windows 7, but ive been using 10 for a few years now so my memory may be incorrect.
And yes, i did try to replace the keyboard battery (a number of times), witch doesn't really seem to make a difference..

Since ive discovered this issue, ive reinstalled my OS multiple times, replaced hard-drives, motherboard+CPU+GPU+RAM and so on, but this issue is still present.
It rarely shows up tho, but does pop up seemingly regardless of computer status, it may be in-game or while browsing the internet or with no apps running while im trying to rename a folder in windows explorer.


So am i just experiencing temporal anomalies, a series of micro-strokes or is this a actual computer-related issue?

Im guessing that the keyboard itself doesn't have any key-buffer worth mentioning, but instead transmits all keypresses to the computer, so i suppose the issue would be with the computer, or possibly my perceived reality...
Ad

I've experienced a similar issue ( although not with your model keyboard ) when Running Windows to Go from a pendrive.

In my case it was a combination of old hardware, and resources ( I.e. memory ) being in high use.

You mentioned its a rare event for you. Next time it occurs, take a look at Task Manager, and check what is using high doses of memory.

It could be a updater application for some third party software you have, the actual windows update service, or possibly something as simple as a virus scan running in the background. If it is something like that, then re-installing that software might sort things, as it may have become corrupted at some point.

If you use Google Chrome at all, then something else to look for is an independent scan it does of all your software and addons which it uses to report to its Security apparatus, to advise you to scan with its built in scanner to clean dodgy applications or addons.
S

I do not use google chrome and that last part of your reply further strengthens my conviction not to..
Orson Wells was all too correct in his statements, we have accepted our own surveillance, often even paying for it ourselves, gladly installing it in our homes.. I try my best to avoid that.

So it feels like my hardware (even the previous setup) should be able to manage a background activity like a virus scan..

Since ive reinstalled my OS a number of times in the past 5 years or so, i probably reinstalled all of my software too, yet the problem persists.

I will be keeping a close eye on the task manager but im guessing it should already be running when the problem occurs, as it wouldnt show anything helpful afterwards..


Knowing myself, i will probably break this keyboard, bashing it when this problem occurs again, so a new keyboard is probably not too far away anyway..

The big question is; would this problem persist regardless of keyboard model/manufacturer (hence: buy a cheap keyboard) or if this would get better if i bought a quality keyboard?

My own, very limited, experience of the phenomena - not with the keyboard though, was finally tracked down to the curswd Windows updates (and search therof). I limited my time for updates to something more convenient. Still happens, but more seldom.
S

i usually configure windows updates to run after midnight..
But on the other hand, its windows, so my settings might be ignored since "microsoft knows best"..

Bill made a lot of loot out of that idea - but times and feelings change.

Back to topic. I have a sneaky feeling, never put to the test, that whatever parameters you put in there, on first switch on, the computer has a quick look for updates - but may not download them according to your settings.

Another suspicion is the search facility. For you convenience (?) I believe the search engine updates the index regularly. I have totally eliminated mine and use, on demand, a third party engine. Much faster and MUCH more efficient
Ad

Just had a weird idea/retrospective while reading this and i DID have a similar problem a WHILE AGO and in my searches for the issue i found that changing the power management to DO NOT ALLOW computer to turn this device off to save power ,in DEVICE MANAGER for ALL OF the USB Root Hub(s) and Generics helped the issue . 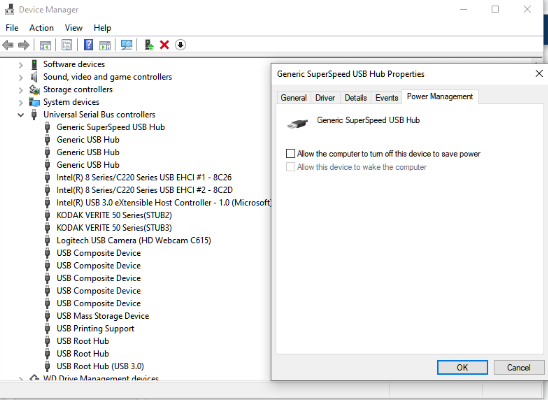 spamuel said:
ive been using a Logitech K260 keyboard for years and ive noticed something strange since i updated to windows 10 (from 7).
Click to expand...

Have you updated your logitech keyboard software? Or try to uninstall it and reinstall a new copy.

FYI: I would switch to a wired keyboard. As these wireless keyboards always seems to have trouble of some form or fashion.