Running Win 10 Ver. 21H1 on a MSI Z77A-G45 motherboard from 2014 on a custom built desktop computer. Early last year an automatic Win 10 update knocked out my printers USB connection and I couldn't get it back without workarounds. So, I installed an Asus PCI-E Network Adapter , PCE-AC58BT, to give my machine Wi-Fi and Bluetooth 5.0. I then connected the printer wirelessly and it worked perfectly. Late in 2021 another automatic Win 10 update knocked out my wireless connection with the printer. However I was able to reinstall it with a USB cable connection and that is now working perfectly.

I just tried to pair my BlueTooth wireless headphones with the computer and couldn't. In investigating I found there is no BlueTooth on/off button in Settings/Devices Bluetooth etc. In Device Mgr. there is no listing at all of any Wi-Fi & BlueTooth adapter. In Services App., BlueTooth Audio Gateway and BlueTooth Support Service are both listed as "Running" and set to "Automatic". BlueTooth User Support Service is also listed but not shown as running and set to "Manual". It will not switch to Automatic. With the Asus Installation CD, I reinstalled the Wifi and BlueTooth setup, but still nothing is recognized in Win 10.
I did order a good BlueTooth 4.0 audio dongle and will try that when it arrives. However, I would really like to get that expensive Asus PCI card working as it has BlueTooth 5.0 and Wi-Fi which was working before. Any suggestions would be appreciated.
Ad

The wifi/bluetooth adapter is not visible anywhere in Device manager? I would have expected it under network adapters.

No error messages? Have you checked the event logs?

Does the wifi still work ?

Hi Tim, no listing for the ASUS Wi-Fi/Bluetooth anywhere in Device manager. Only a RealTek PCIe GbE Family Controller in #3, an Intel Wireless AC9620 in slot #4, and 8 Wan Miniports, listed in Network Adapter. My NVIDA GeForce is in PCI slot #1.

The Wi-Fi was working, but was knocked out by a Windows automatic update. I never tried to connect anything with Bluetooth. Now neither Wi-Fi nor Bluetooth, both on the ASUS PCE-AC58BT network adapter are working and the adapter is not listed anywhere.

I spent about 15 minutes going through the event logs but couldn't find anything regarding the adapter, Bluetooth or Wi-Fi.

Further to the above, I opened the case today and found the NVIDA GeForce in PCI 2, the RealTek Family Controller in PCI 3, and my unrecognized and unlisted Asus Wi-Fi/BT controller in PCI 6 and nothing in any of the other slots. So I have a phantom Intel Wireless-AC 9620 Wi-Fi/BT (5.1) adapter which is listed in Device Mgr./Network Controllers as being in PCI 4.

Have you used the "Show hidden devices" option from Device Manager's View menu?
Just to see if it turns up anything interesting under Bluetooth, Network adapters, or Other devices.

Have you considered uninstalling the Intel AC 9620 from device manager ticking the box to remove drivers as well (showing in PCI 4)
Shutting down the machine and then swapping the Asus device from slot 6, into slot 4, rebooting and see if that produces any smoke.

Is there perhaps a BIOS update from the manufacturer that might address the issue.
Have you considered grabbing the 21H2 ISO from https://www.microsoft.com/en-us/software-download/windows10
And mounting that to upgrade from 21H1, just on the off chance that it might fix the problem?

Thanks for the suggestions as I was looking for just this type of "what to do next" advice.

Using "Show hidden devices" there is still no listing for the Asus Bluetooth adapter. When opening the phantom Intel adapter listing I see under General that "This device is working fine." is showing. Under "Events" I see that two days ago when I ran the Asus Bluetooth adapter installation CD that the Intel adapter installation was "Configured", but the next entry is "Device not started". It was also configured and started last year when the Asus adapter was knocked out.

First, as you recommended, I'll do the upgrade to Win 10 ver. 21H2 ISO and see what that does. If that doesn't work, I'll use "Device Mgr./Action/Uninstall Device" to uninstall the phantom Intel adapter. If box to "remove drivers" appears, I'll tick that, too. As the Asus adapter was working fine in PCI 6 before, I'll reboot and see what happens. If that doesn't work, I'll switch the card from slot 4 to slot 6.
Ad

So.... out of pure curiosity I decided to go to the ASUS site and download the drivers. 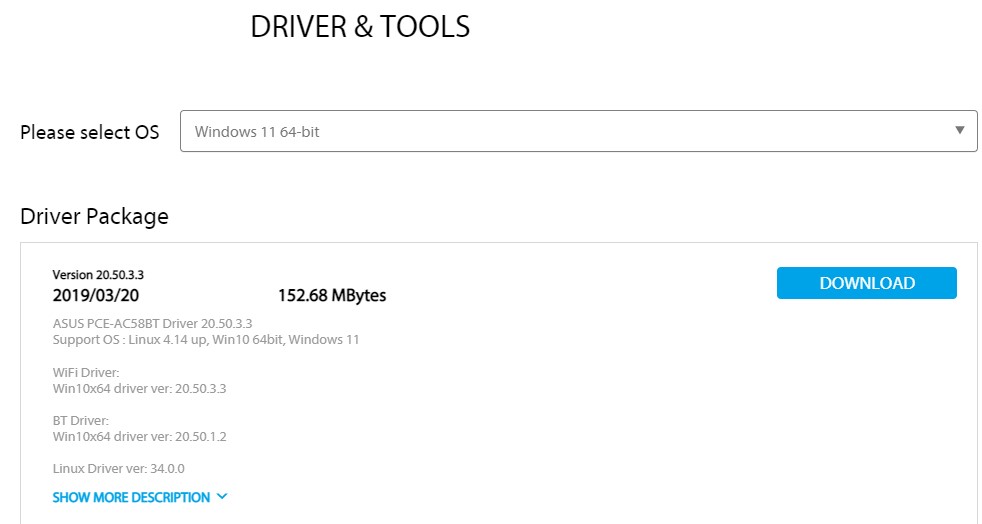 Not sure if those are what you are using currently but they are likely the ones you need. Not sure if a Windows update will allow you to maintain them, without consistently going into Device Manager and rolling back the driver every time they get updated.

After extracting them as needed, I picked through them and discovered that the drivers for both WiFi and Bluetooth
are Intel drivers, so while ASUS may indeed be the manufacturer, they are utilizing Intel chipsets on the card.
Which likely explains why you are seeing it as an

As for why the difference in PCIe bus identification...
I'm not sure that Windows enumerates them the same way as you are identifying them physically.
It may be that PCIe 16x get enumerated and then 8x starts over, or 4x or whatever.
OR
The mere fact that some are physically populated and other aren't may impact how Windows enumerates them and what you see in Device Manager.
Frankly.... I really don't know.

Both the WiFi and Bluetooth drivers look considerably more recent than anything else I can find
AND
Having a look at the release notes for both, they both include the chipset(s) on the card you have installed.

Thanks a Million, Trouble for all the time you're putting in to help me on this. I downloaded both the Asus PPCE-AC58BT driver update package and then both the Intel Wireless-AC 9260 64-bit downloads. First, I installed the two Intel Drivers as you have to do that from their web site. No, cigars. Still no Bluetooth On/Off button.

So I Uninstalled the Intel Wireless.AC 9260 adapter in Device Manager and checked the Uninstall drivers box. I then rebooted and the Asus adapter was recognized as the Intel 9260 adapter again in Device Mgr., but still no Bluetooth On/Button.

Then I tried to install the ASUS download and for both the Wi-Fi and Bluetooth installs got a message that I already had a more recent driver version installed. The Asus Bluetooth installation actually told me that they don't have the authority to "downgrade" my drivers from the installed (Intel download) ver. 21.---- to the Asus ver. 20.----. So, I powered off completely and rebooted, but still no "On/Off button.

continued..... I then redownloaded the Intel 9260 Wi-Fi and Bluetooth drivers again and rebooted. Now, the new drivers are recognized in Device Mgr. for Intel 9260 adapter. As far as the PCIe bus number is concerned, as everything shows this adapter "Working properly",
and the Asus adapter worked after I first installed it, I think you are right and as all the PCIe busses are empty between 3 and 6 (where the adapter actually is) it simply reads it as bus #4.

So, the adapter is being recognized, we have the very latest drivers, but still no button so we can turn the Bluetooth On. Any suggestions as to where I go from here and thanks again for all you advice and time spent. Dennis

continued.... I just moved the Asus Wi-Fi/Bluetooth adapter to PCIe bus #4. It is being recognized in Device Mgr. as "Working properly" and showing the latest ver. 22.100.1.1 drivers. This didn't solve the problem of no Bluetooth On/Off button, but it did eliminate that as the problem.
Ad

onlinenow said:
Any suggestions as to where I go from here
Click to expand...

That's the one I use on my Win11 system. It has a realtek chipset and works great.

Thanks for the suggestion, Trouble. When I first started working on this issue last Wed., I realized I needed a backup plan so I checked on dongle for headphones reviews and ordered one from Amazon.com. I just heard from DHL today that it should get here on the 14th. In the meantime, I'm going to go back over all the posts on the "No On/Off Button" issue and see if there is anything I missed.

One interesting result of this is that when I tried to upgrade to Win 11, I found out that my nine year old custom built tower computer isn't upgradeable to Win 11 due to the motherboard not supporting TPM and my Intel Core i7 from 2012 not qualifying. Again, my Thunderbird won't handle the newest processors so I've got to get a new system if I want Win 11. As this system works super for my home computing needs, I'll wait until Win 11 has been out for a while and all the bugs worked out, then get a new machine.

Again, thanks for all your help,

I just figured that this issue had taken up enough of your time.
Something that should work, you do everything possible to get it to work and yet it still doesn't.

I figured if you bought that dongle and got your system past this point that at some later date (probably soon) the stuff that was broken might automagically heal itself.

onlinenow said:
In the meantime, I'm going to go back over all the posts on the "No On/Off Button" issue and see if there is anything I missed.
Click to expand...

Good luck with that (seriously).
AND
Keep us posted as to how you're getting on.
Ad

I have just completed nine different attempted solutions to get the Bluetooth On/Off button to show. At this point I will mark this thread Solved as I've already spent enough time and body parts on this issue. I will simple wait for a dongle I ordered to arrive and try to get BT that way. Thanks again for all your help.