I have installed Win 10 with some problems but most of it is settling down now. I noticed that my FreeAgent desktop external drive is not recognized by the system. My original 2008 was replaced in 2012 with model ST305004FDAIEI-RK.
I don't find this model# on the Win10 compatibility list but there are some very similar. I downloaded the Seagate software but when I run the program it tells me that no external drive has been located. There is no device driver and I don't know how to get one. Any suggestions on what to do next.
Ad

This is a powered device. It is plugged into AC with a AC/DC adapter that is original. The device has a light on the edge and it is lit. I have tried 3 different USB ports but no different response. The unit did work with Win 8.1 prior to installing Win 10 all though I did have some problems when I upgraded to 8.1.
E

I have exactly the same problem. My Free Agent worked with Win 7 as a backup device until I upgraded to Win 10. File Explorer sees the drive and I can access files on it.
J

Eric328 said:
I have exactly the same problem. My Free Agent worked with Win 7 as a backup device until I upgraded to Win 10. File Explorer sees the drive and I can access files on it.
Click to expand...

I have the same problem as Eric328. Has anybody resolved this issue?

The Original Poster in this thread said......

Jerry2000 said:
I noticed that my FreeAgent desktop external drive is not recognized by the system.
Click to expand...


Eric328 said:
I have exactly the same problem. My Free Agent worked with Win 7 as a backup device until I upgraded to Win 10. File Explorer sees the drive and I can access files on it.
Click to expand...

Obviously not "exactly the same problem.
Now you are saying

What exactly is "same problem"?
Ad

My FreeAgent works fine. Did you install the latest Seagate Dashboard? I didn't have to, but it's worth a try.
J

Like Eric328 said, "My Free Agent worked with Win 7 as a backup device until I upgraded to Win 10. File Explorer sees the drive and I can access files on it." Mine is a powered drive and I have tried it in other USB ports, but Windows 10 still won't recognise it.

The drive is not....
Detected as a possible Backup Choice when using Windows Backup? 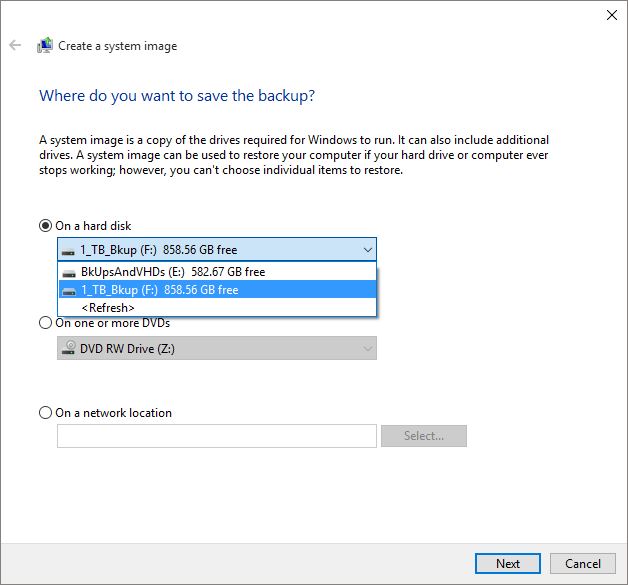 The Drive IS detected (and recommended) as the backup choice when using Windows Backup. I actually use File History to back up my files on the Free Agent external drive -- it has no problem finding it. Still every time I start my computer I get the message "Seagate Status Icon - No drive connected"

I would think that, that

John49 said:
every time I start my computer I get the message "Seagate Status Icon - No drive connected"
Click to expand...

Is yet a different problem all together and would seem to suggest an issue with whatever is producing the "Seagate Status Icon" and not Windows 10.
As BigFeet suggested above, have you installed the latest Seagate Dashboard and maybe uninstalling any older version of that or similar software?
Ad

I uninstalled and reinstalled Seagate Manager but the problem persists. Checking around at other sites it seems that Seagate Manager as it is not compatible with Windows 10 and Seagate has no plans to make it so. I can still back up my files to the Free Agent external hard drive using Windows File History so I'm thankful for that. It's just that I had quite a bit more functionality when using Seagate Manager.
T

I have the same problems as above, I contacted "Seagate" thinking they could help. Despite the multi - emails over a week, they tell my it is not their problem; contact M/S.
I do not see answers from both these manufacturers, I am sure someone will know the answer, but this answer seems to be withheld?
If the older Seagate product/s are not compatible with Win 10, as it seems to me, surely someone can say.
Whilst I remain hopeful of a positive solution/answer, I am not holding my breath.

I am another user of a Seagate Free Agent external HDD backup who suddenly lost my automatic backup when I upgraded to Windows 10. The files are available to Windows Explorer but the Seagate Manager can't find the HDD. I have also lost my sound software but hope to recover, repair or update the drivers.

My Seagate free agent goflex is no longer supported in 10..spoke to support and was told software was no longer compatible..perhaps this is the issue..or one of them.

The software isn't necessary to run the external hdd. Although, it works fine for me. I only use it to put the drive to sleep after 15 minutes. If you don't do this, it WILL get very hot. I've had it peak at 54c.

The seagate backup software is terrible cc44. I'd recommend one of the free offerings out there. I use AOMEI Backupper. But EaseUS has a good one also.
Ad

[SOLVED] I had the same problem. Apparently it isn’t your computer – it is the old Seagate Manager program that is not compatible. There is a GoFlex Software listed as ”Dashboard and Memeo software for GoFlex Drives - updated for Windows 8” program that works for Windows 10. It will backup your hard drive or whatever you want it to. I have it downloading mine as I type this right now (1/29/2017). It is a Seagate Dashboard and can be downloaded here:

Steven... Thanks a million! I followed your lead and everything is currently being backed up. Thanks again!

John49 said:
Steven... Thanks a million! I followed your lead and everything is currently being backed up. Thanks again!

Happy I could help, and glad it worked for you.
Ad

ETA - I just realized that this is the #$%# paid version of the software, which Seagate at some point started doing. The backup software used to be included with the purchase of their external drives.

So while this DOES work, after a month you'll have to ba $60 for it. There are less expensive options out there if you're going to have to pay for the software anyway.

I can also confirm that the software Steven linked is working for me. I've had a 1Tb FreeAgent Drive that I've used for generation backup of development files and some personal data for years.

Seagate Manager just stopped working, because it could no longer see the drive after Windows 10, even though Windows 10 sees it fine.

The Windows 10 backup system does work, but I was unsatisfied with my control over what was happening, and for some reason it was sometimes missing current file, and seems to ignore "backup now" instructions sometimes.

Make sure to Download the install labeled as he suggested. The "top" selection in that download section looks like backup software, but is actually just a driver you don't need. The bottom choice is the correct one.

I have it installed and performing a backup as I type this.