Okay, there's a lot of explanation here before getting to where I'm currently up to. To begin with, here's what I'm using:


Up until about five days ago, I had a Seagate Expansion 4TB portable hard drive plugged into it, filled with nothing but music and video files (and their respective folders). Of the 3.63TB available space on there, I had 140GB remaining. It had been working fine for about four months.

Five nights ago I added another 10gb worth of files onto it, when I got an I/O error message, followed by a "fatal error" message. Not knowing what else to do, I restarted the computer. On booting up again, the hard drive was recognised - I could access it, I could see all of the files in their correct folders, but actually running any of the video files resulted in a lot of buffering.

I ran a sector check, a virus scan, the defragger and chkdsk using CMD, all coming back saying everything was fine. I tried changing the caching policies as suggested elsewhere, but this did nothing either. I thought I'd try and copy some files over to another drive so at least I'd have some semblance of a working video library, but it turned out the transfer rate was ridiculously slow - like an average of 355kbps.

This lead me to think it was a USB problem. Tried the device in the two other ports I have, same with each of them. I tried other devices in the same ports and they were all working fine, so I thought I'd try using a SATA-to-USB adaptor. The adaptor arrived this morning, so I dismantled the Seagate casing and connected it up.

The "device connected" sound played, but there was nothing in My Computer to suggest that it had been recognised. Device Manager and Disk Manager both saw something was there though - Disk Manager said that it was there, with 100% free space, but it didn't have a drive letter assigned to it. When I right-clicked to try and assign a letter, all of the options were greyed out.

Fearing that I'd lost all of my data, I connected through USB once more. After about twenty minutes, the drive was recognised and everything was in there as I'd left it. So once more, I thought I'd try the SATA adaptor again, but with some more patience. Connected it up, left it for over an hour and I got the same results as the last time I tried it, so it was back to USB again.

My only remaining theory is that there's just too much stuff on there for it to cope with, so currently I am transferring just over 100gb from it onto another drive, which is going to take a long time: 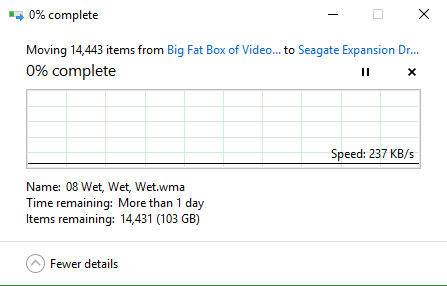 If anyone has any suggestions I'd be happy to hear them - even if it's something as simple as the SATA adaptor being at fault? It's the data I'm more concerned about rather than the actual hard drive - they can be replaced easily enough but I've been building up this video library for close to ten years now!

I tried connecting the adaptor on its own, without a hard disk and it was recognised as an empty drive, oddly. The exact adaptor is a Sabrent 2.5" SATA Hard Drive/SSD To USB 3.0 Adaptor (EC-SSHD).
Ad

You know we had similar problems with our left USB 3.0 ports on our G75 - g752 those ports for us are on a daughter board and somehow they just don't support enough energy for large drives or large transfers of data. this is true even with a powered Hub, although our right side USB ports work just fine. Perhaps your not supplying enough power for the 4 TB drive. Remember most hub do supply power but still depend on the power from the notebook at the same time. I don't know if any of this can help you but seem the SATA to ESATA would give you a chance to recover your data at least until you can sort out what the heck is going on.
Last edited: Oct 30, 2017

My External USB 4TB HDD [different brand, formatted exFAT] came with its own AC power supply, has no issues with the USB 3.0 ports on the computer. The USB 3.0 port it is using is on a PCIe 1X Add-in card.
R

Power supply issues, I never thought of that - I'm going out tomorrow to find another SATA adaptor in case it's an issue with that, I'll see if I can find one with a power supply included.

Just had a look around and my laptop doesn't appear to have an ESATA port, but thanks though!
R

Oh hold on, just seen USB to ESATA adaptors on Amazon - I'll try that if tomorrow's plan doesn't work. Thanks!

That way you can back up your data to your desktop or a friends desktop to protect it until you can sort our what the issue actually is.
Ad

Well, I got the new SATA to USB adaptor, this time one with a power lead, and I got pretty much exactly the same results as using the USB cable. Ah well.

I've managed to take screenshots of each folder, so at least I know what I'm missing.
Ad

k, I was refereeing to a eSATA to SATA so that you could install the hard drive in a desktop computer and try to salvage your data
You must log in or register to reply here.