Win7 user making the Move to 10

Hi folks I'm from the Win7 forums making the move to win 10. I'm old and find that the time to make the move is now.

I will be doing this with a new system with Windows 10 Pro. It's going to be the last computer I will purchase so I'm going a little crazy on it. Let's call it the computer the "one I've always wanted," I think, with in the budget amount I've allotted. I'm sure the questions will abound on my part. I do try to figure things out on my own but sometimes I have a gray matter freeze, which seems to be more frequent in the last few years, on issues and need a little, or a lot, of help. In addition I have not kept up with the latest and greatest components.

Is it permissible to post the specs of the computer I am considering for opinions? I assume the form has away to add specs to my profile and I would fill it out with my choice of the moment. I understand everyone has opinions and so do I. In posting the specs I will include my intended use.

Please advise me of where to start. 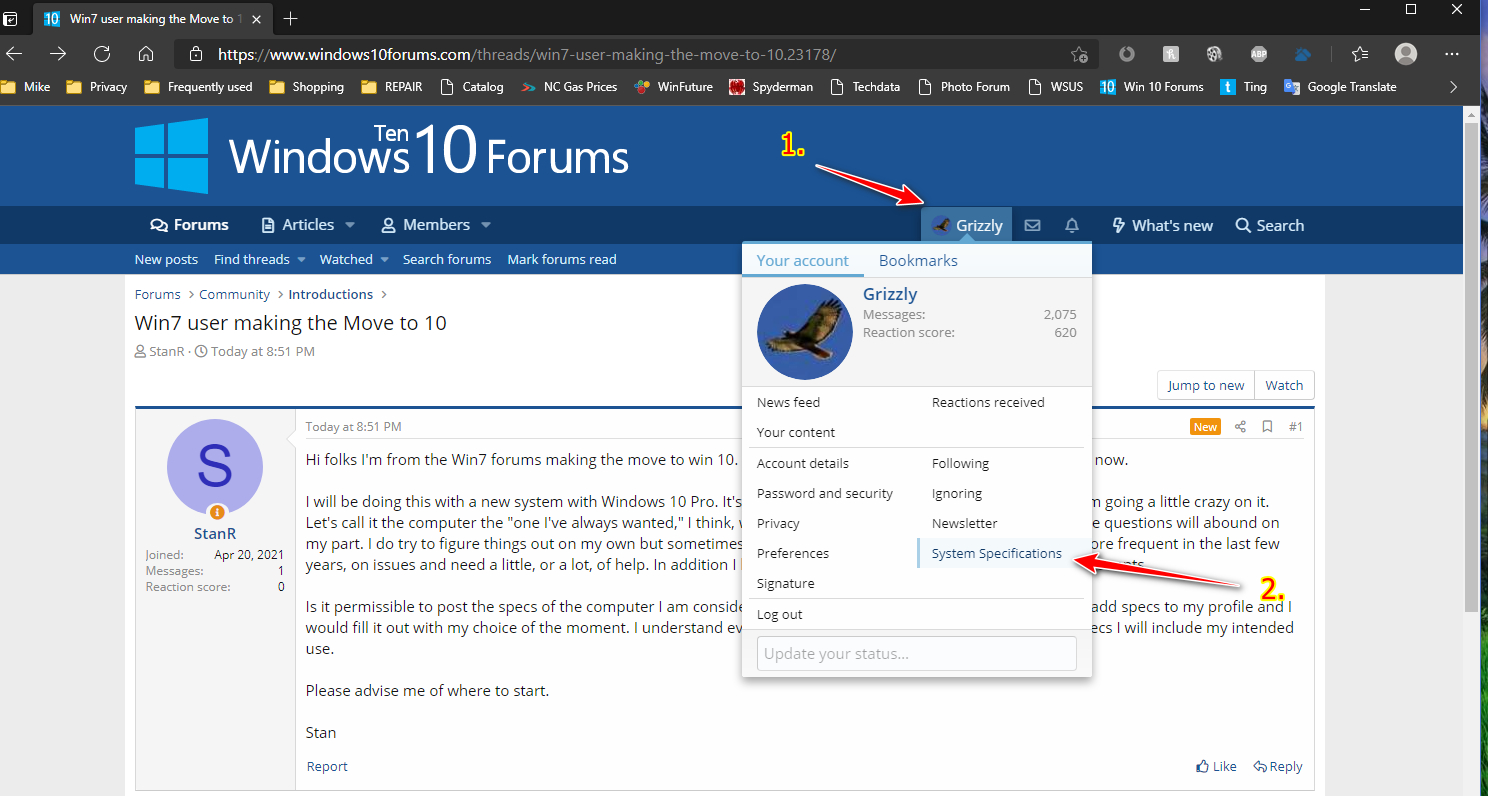 or you can post the "future" specs right here :

Chat about anything related to Windows 10 that doesn't belong in the categories below.

Thanks for the reply and welcome.
I've put in the system specs in for my number one choice. I will fill out the rest later
I appreciate your help,
Thanks

Thanks for the reply and welcome.
I've put in the system specs in for my number one choice. I will fill out the rest later
I appreciate your help,
Thanks
Click to expand...

Make sure you only install what you want ...Go to Start > Privacy and untick all the once you are not interested in. It will keep you sane

Welcome to the forums, Stan.

Welcome @StanR. As for moving up to Win10, don't be afraid of it. The only real issues involved are the drivers for the Win7 computer and some older programs may not work properly. Win10 has an announced date [by Microsoft] of Oct. 14, 2025, for end of support. A new computer may even come with Win10 with free license to Win11, my 4-month-old Notebook with Pro did.
Ad

I am sorry to say this, but I would move to windows 11 as windows 10 is running out of support in 4 years. but as long as you have some form of updated security software other then microsoft defender then you should be good.
Ad

Specifically, as announced by Microsoft, it is October 14, 2025. I'm not having any issues with Win11 on a new Notebook I got 4 months ago, also runs the programs I have on Win10, one of which is Lotus SmartSuite 9.7 [not to be confused with the older SS 97]. My need for a new machine is that none of mine are new enough to meet the specs of Win11 but I have clients that have already gotten Win11 and I need to know more about it and because of that I don't do much in the way of customizing.

Biggest thing that probably won't bother a lot of users is relocating things like some from Control Panel are now on the right-click of the Start button, one of the biggest is Settings now on that right-click as is Task Manager. An observation, used to be Apple had it Mac OS X but now is macOS, makes one wonder what X or 10 involvement meant.