It's probably just me, but.....
Does anyone else have a problem (emotional, psychological, or just plain old don't like it.) with the new file explorer icon opening to something called "Home".
Would be nice to be able to customize the default to something more preferable like.... This PC, or Documents or anything I choose.
Ad

The day I moved from Windows 3.11 to Windows 95, was when MS lost me with their file management. I have never complained about the functionality of the file manager I use. I can't say the same for when it comes to MS. They claim they have the consumers interest at heart, but time and time again they prove they don't. If you take a look at any software that continually changes, you will find unhappy consumers. Sadly we are stuck with this upgrade repetition in Windows, because there is nothing better.

Here you are wanting a simple option to change the default location for Explorer. What is so difficult for Microsoft to understand we are not all incompetent and can make these choices ourselves. The fact that they(MS) can't see our competence shows their incompetence.

These kind of issues really get under my skin. MS is treating us all, as if we were born yesterday.

Well I suppose when you're building a robust and feature rich Operating System, that must contain many elements of backwards compatibility as well as support for hundreds of thousands of hardware devices, not to mention an equal amount of third party software (including device drivers)....
AND all the while having to keep in mind that you must do so with the thought in mind that it is going to be used (literally) by young and old alike many having absolutely no idea as to what they are doing with a computer at all...
THEN
The lowest common denominator wins.

Personally I've overcome the above problem by just creating my own shortcut (to explorer.exe in the Windows Directory) which works exactly how I want it to. Got rid of theirs and pinned mine where I want it. 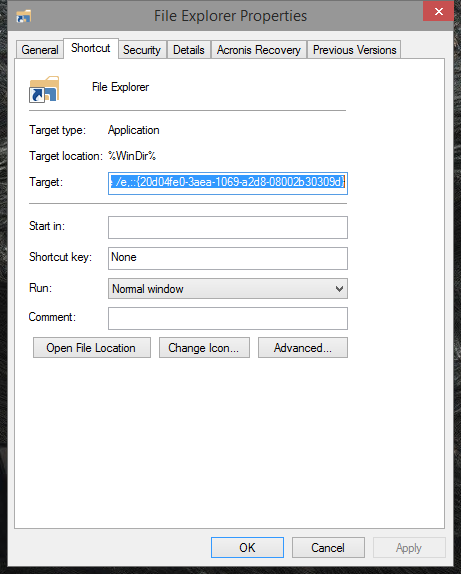 I'm glad you got it fixed to suit your needs.

I can't say I agree with your approval of MS throwing out all options to make the OS as limited as possible, all for the purpose of keeping it compatible with millions of hardware configurations. Seriously why would that have any effect on the user being able to change the default opening location of Explorer? At least Internet Explorer still has the option to change the opening webpage. Or do you think all the different hardware configurations should dictate one opening location for IE?

Nope....
That's not what I said or at least that is not what I intended to say.
My (evidently) poorly worded synopsis was more focused around the Luddites among us who have virtually no technical skills or computer experience at all.
Those guys need to be able to buy a computer at one of the Big Box Stores and be able to bring it home and manage to actually get some work done with it. They are not concerned with the under-the-hood, bits and bobs like the rest of us. They just want to be able to Skype with their kids so they can see their new grandchild.
To them... they're just happy that explorer even opens at all if they even care at all, never mind what location in the hierarchical directory tree it actually defaults to.
AND
Those are the guys that ultimately Win.

Trouble said:
AND
Those are the guys that ultimately Win.
Click to expand...

Anyway, I think I have derailed your thread way to long now. Now if I can figure out all my issues, because of lack of options. Looks as if I will be using a Start Menu replacement even though MS put it back in Windows. And thats after I find software to add translucency to my window frames, to break up the bland solid pastel color. And the wireless adapter menu has got to change, that is even worse than the window frames. The entire box is a bland solid pastel color.

There has got to be a way to turning these colors off, without changing the functionality of how Windows 10 works. If there is a way, I will figure it out. If not I will stick with Windows 7 and bitch for another 2 years.
Ad

clifford_cooley said:
I will figure it out. If not I will stick with Windows 7 and bitch for another 2 years.
Click to expand...

All I do is open "This PC", Right click the section I want to open by default, and select Pin to start"
I can then go into the start menu, find the item, and, if required, right click it again and "Pin to taskbar"
There is probably another way, but this is what I have done since Vista. It also produces a smarter icon:

This icon, for example, takes me straight to the root of Windows X