Brand-new laptop, Dell Inspiron. My first experience with Windows 10. Spent 3 hours on the phone with tech support who "fixed it." It wasn't showing that Flashplayer was installed so she reinstalled it. The whole system is very slow but the only 2 games I play, including Lumosity, which requires speed, are impossible. Flashplayer forum page doesn't appear to exist, and because Flashplayer is free, I don't qualify for tech support. It's the newest Flashplayer, 26.0.0.131, and a 6-day old computer. Anyone have any ideas? Thanks! ....oh, forgot to say, Windows Explorer just doesn't work and I'm using Chrome (Flashplayer was downloaded onto Chrome automatically although I installed Chrome after the fact).
Ad


I'm a little confused with your post to be honest. You mention you spent 3 hours with tech support who fixed your Dell Inspiron laptop. I'm assuming here you mean a Dell technician. What were they fixing though?


You mention someone could not find Flashplayer installed. Windows 10 does not come with Fashplayer by default, with the exception of the Microsoft Edge browser that has Flashplayer built into it. So unless Dell are selling laptops with Flashplayer pre-installed you would not expect it to be there.


At the end of the day soemone else installed it for you it seems, and again I am assuming that someone else was a Dell support technician, If they installed it, then you ought to be able to get support from them. If you had installed it yourself that would be a different matter of course.


I think to be able to help you get your laptop working as you are wanting it to we'll need some clear information from you. Can you press your windows key + R key together to open your run dialog. In the run dialog type msinfo32 then click OK.

In the window that opens can you let us know the information it gives for the following items:

Sample image to show what I'm asking for 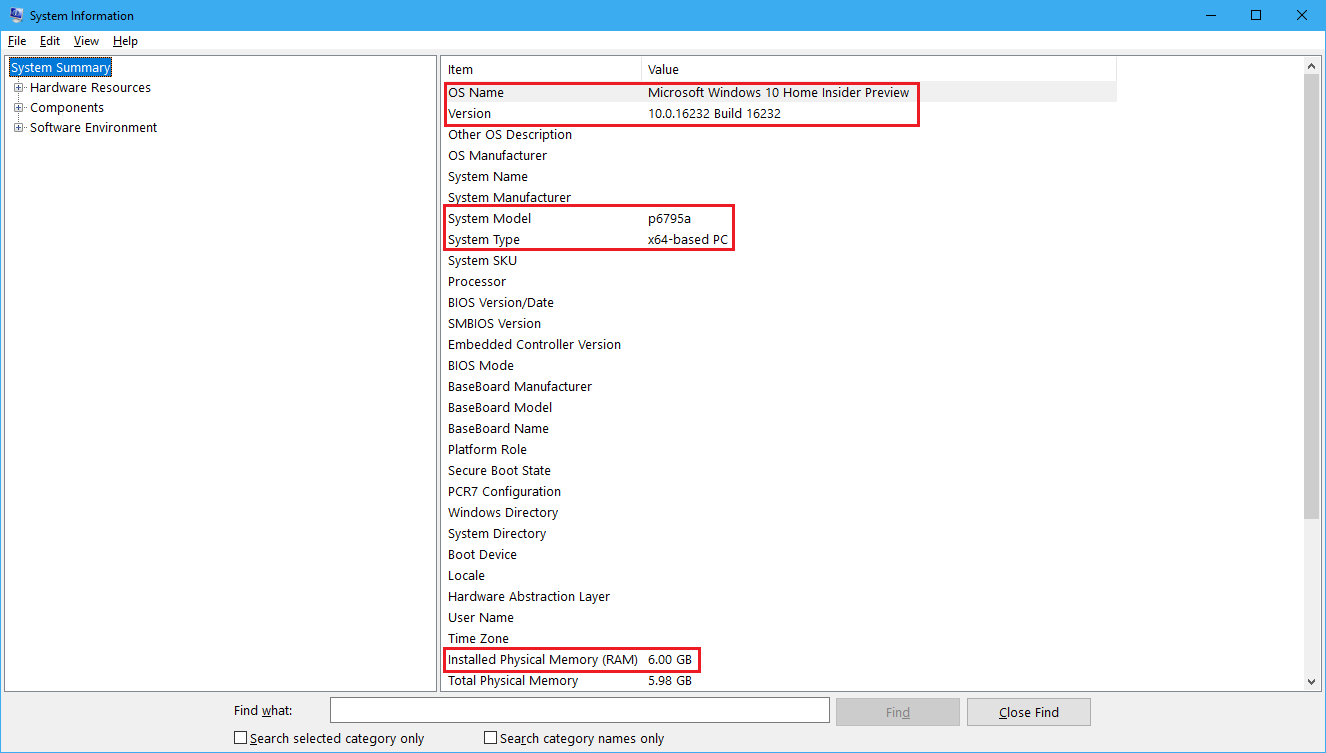 Could you also let us know what it was Dell was trying to fix for you originally. Did you call them because the system was running slow? Or, did you call because Explorer did not work? Something else?

Also, are you aware the lastest Google Chrome has Flash Payer all ready installed in it too.

If you click the Customize dots in the top right of browser then select settings then scroll to bottom of page and click Advanced then scroll towards bottom of Privacy and security panel and click on Content settings you'll see you have options for Flash there which you can set up.

The point being you should not need to separately download and install Flash Player.

Thank you for your response. I originally contacted Dell Premium Tech Support yesterday because I had bought over the phone (on June 8) a laptop with 6GB of RAM, and that is not what I received. Subsequent emails to and from the person who sold it to me over the phone were not able to give me any specific information about the laptop until it arrived and the packing slip said it was 4GB. Of course I have no written proof that I was told 6GB, and it is my word against hers, but I wrote it down and was pleased to know that was what I was getting. When I finally got an email from her (after complaining about 4GB) all I got was a list of specifications, as if from a robot.

The people at Dell on the phone yesterday all told me that the price I paid was for 4GB, and the fact that they sent me an external hard drive for free (again, I had asked the first person if I needed it, and received no answer) was supposed to make up for the loss of 2GB of memory. I had to give in as they said I got what I paid for, whether or not it's what I was promised. The Premium tech support technician was to help with with the fact that I could not open emails (intermittently) in my outlook.com account (I contacted outlook and they said they could fix it for either $99 or $199 and then abruptly cut off the chat session when I responded "DEFINITELY NOT."). I would click on an email to open it, a window would pop up saying "live.com is not responding," and I'd have to refresh the whole page to have it start all over again.

I was trying to play a game which requires Flash, which said Flash was blocked (I was using Chrome as it said it was only downloaded on Chrome), but when I checked, it said that Flashplayer was "on." This is why she reinstalled Flash on Chrome for me. After she did that, I tried the game and it worked, but slowly. Today it is VERY slow. I was having trouble with Microsoft Edge, and Flashplayer wasn't on Internet Explorer, so I have decided to use Chrome.

The technician spent so much time with me because she downloaded programs for me, set up my printer, helped me with backing up files on my old computer to transfer to the new, etc.

I am a retiree and self-taught, so a lot of things are beyond my understanding!

Yes, in "Advanced, contents and settings," I have allowed sites to use flash. Yesterday before the technician helped me, the game I play wouldn't work at all. It does work now, but very slowly. EVERYTHING works slowly.
I have put a call in to her, to help me next week....I just thought if it being so slow was a common problem, someone might know why. Thank you.

Wow it sure sounds like they have given you a run-around so far as service goes.

I'd be tempted to return the computer, get a refund, and try a different company if I had service like that.


I don't really play a lot of games so I am no expert in this, but I know some games are quite graphics intensive, meaning you need a quality graphics card/chipset to handle the frame rate per second [fps], that modern games need to run smoothly.

Another factor if its an online game, is your internet connection and the speed its running at.

Both of those might be worth asking her about when she next takes a look at your computer.


Also, it would be worth taking a look at what antivirus software they installed on your computer. A lot of package deals come bundled with additional software, and they may have installed something like McAfee, Norton, etcetera, which while quality products do not necessarily run well on all computers. So she could take a look at your processes running to see whether any third party software they installed on your computer is perhaps not performing properly. If there is some incompatible software running, it may cause memory leaks and thus consume a lot of the memory your computer needs to run smoothly. It's entirely up to you, but Windows 10 comes with Windows Defender Security Center for free, and while it may not be the best antivirus program, it at least will run in a Windows OS without causing too much grief.

The only other thing she could do for you that could help a lot would be to check whether there are any drivers for your hardware, and also BIOS, that could be updated. That could greatly improve your computers performance.


There are quite a few active members in our Forum using Dell computers, so hopefully, they can add some more information for you to check on, as I do not own a Dell myself.
J

Thanks for your prompt response! Yes, I called yesterday with the idea of maybe sending it back, but she spent SO much time patiently installing programs and helping me, that I thought I'd give it a try, and it really was working better in every way yesterday!! I have used Dells for many years, personally and when I was teaching, without issue.

I have been running my game on my old, falling-apart computer for a long time without any problem at all. It's a simple-ish, low-key game, no simulated wars, flying monsters, or anything like that! Also, on the old one, I have Norton AND Malwarebytes, with no problem. I had her install the Malwarebytes (which I pay for) onto the new one. There was another anti-virus thing which she took off. I'm running this laptop on exactly the same internet connection, same everything....which is why I have been surprised that it is so slow. And no, I'm not running them both at the same time! It's the only device in the house.

I appreciate your insights and your suggestions. Thank you!

try to upgrade your version of W10 and see what happens:

Okay..............the laptop is brand-new, out-of-the-box, not yet a week old..... I discovered that even though Flashplayer is downloaded "to Chrome," that my game works much better/faster on Explorer. Go figure.
Thanks.

even though the laptop is new to you, it may still have an older version of Windows 10 installed!.
Ad

Thank you for this!
You must log in or register to reply here.