Yesterday morning I installed a replacement DVDR. On restarting the computer I was told the computer was updating. After a couple of hours I realized it was in a loop during restart, (the same screen flashing up, then going blank. Using my Ipad I searched and was told to make sure my computer was on line and then restart in safe mode. I got a trouble shooting screen which I proceeded with. When W10 started again everything had changed. Only Microsoft options were available and my old version of Office was gone. Outlook was gone so my important emails in Outlook folders had gone. I am an older computer user, a pensioner, who can't afford to buy from the cloud. I am the only one this has happened to? Or is this some form of ransom-ware?
Ad

can you get into "Safe Mode"?:

Do you have a recovery partition or a USB stick/DVD? so you can do a system recovery/restore to an earlier day:

Yes When I went to safe mode a trouble shooter screen appears and I was able to complete the update. My question was about the microsoft removal of all competing products and my legitimate version of Office 2007. Is this what happens on this update? or is the update only partially complete? or is there some ransom-ware involved?

Have you tried scanning your PC for Malware?.

Give it some time as well as a few reboots after things settle down. IF your computer is equipped with a hard disk activity light, keep an eye on that and only reboot when it is inactive / dark.
Depending on which "update" just got installed / finished some processes may still be tidying up.
Additionally again, depending on which "update" transpired there may be other updates which may be on-going or which you may be able to force manually, simply by checking Windows Updates.
Depending on the horsepower of the PC, some of the updates can be quite demanding a require some extra time to finish up and settle down.
The important thing is not to become overly reactionary, as they rarely result in missing data unless you intentionally or inadvertently chose to "keep nothing" during a "upgrade" but that is not an option during an "update".

You may also want to check your C:\ drive in file explorer to see if the process left a folder named Windows.OLD.
P

Thank you for that reassurance. It is of course an older desk top. And we have a very slow internet connection. So your diagnosis seems likely. There is a windows.old and an (empty) windows.old1 so I will cross my fingers and hope.
I have scanned with AVG and now Malware and there is nothing found.
Backup and restore does not seem an option even thought I backed up regularly and set restore points. So I hope that comes right too.
Ad

It seems my update is complete. So I am left with all the problems.
This of course is pushing me away from MS.

Peter S said:
My question was about the microsoft removal of all competing products and my legitimate version of Office 2007
Click to expand...

Would you try clicking the start button and just typing
winword.exe
and hit the enter key
Does that produce anything?
P

I have found the word/excel file in Windows.old and clicking on them produces a "the operating system is not configured to run this app". I typed in what you asked and the screen shot is the result. I have also found in one of my searched that MS will stop office 2007 on the 10/10/17. So I have given up. I have just lost my genuine copy of Adobe Creative Suite CS3 Premium which Adobe made me reactivate then would not reactivate it?! The cloud of obscure greed is closing in.

While I'll admit it is probably not optimal, if you have your installation media and product key for Office 2007, you might try reinstalling it. I would think that it should work OK, although may require some office service pack updates depending on your source media.
I'm running an old copy of Share Point Designer 2007 and it seems to work fine.

I can't speak to Adobe CS3 Premium as I've never owned it. Perhaps someone with more experience will have more to contribute as to that.

You might also want to check Settings > Updates > Advanced settings and make sure that other MS products software updates is also ticked!: 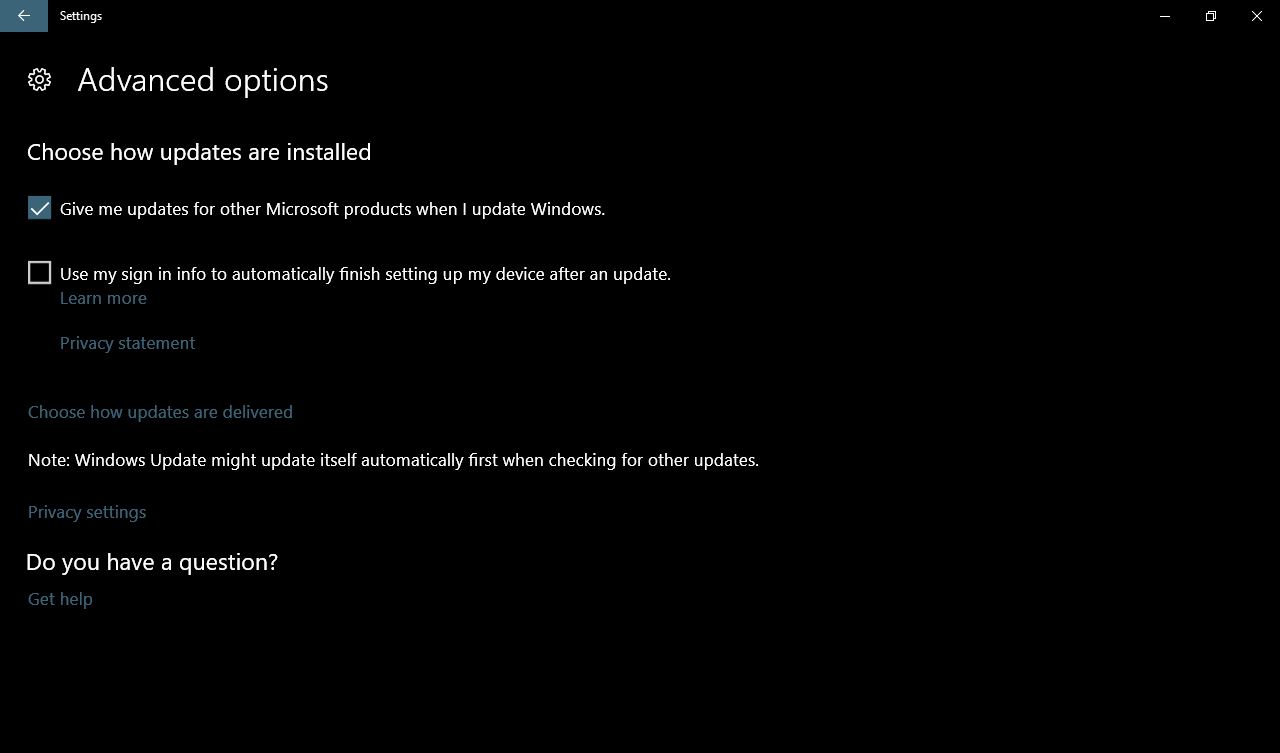 It seems MS is being quite anti-social with older products.
And it affects us older users who can't take change so easily.

I believe what @Wolfie was showing you is that, that box needs to be checked to make sure that other Microsoft products receives downloads such as service packs, patches and hotfixes during the Windows Update process.
Those "other Microsoft Products" would include your 2007 Office Suite.

For some reason, it is not always checked by default as one might expect it to be so checking and confirming that it is, is generally a very good idea.
Ad

Thanks @Wolfie and NoobWhisper I think I have got to the bottom and bounced back. This has been a great unsettling learning curve.
OpenOffice, Scribus, Gimp, Webmail to the rescue.