I started getting problems with Bluetooth following the upgrade to Windows 10 which may or may not be the cause. I have periodic issues with a Bluetooth mouse and less so a Lumia phone, but in particular two speakers stopped working completely. I have tried many things. Drivers from MS are described as 'the best available.' I have now bought a USB Bluetooth dongle (Cambridge Silicon Radio) as suggested to me.

It is not working. It shows up with a yellow triangle and report 'This device cannot start' Code 10. In Events I get 'further installation is required.' Meaning what? The Bluetooth service continues to be unsatisfactory, the Bluetooth speakers still do not work.

Can anyone advise me on this, and in particular how I might get the new dongle to work as I had hoped?
Ad

I will look up the device you reference to see if I can find any drivers. But exactly what devices are involved can be important, which means the computer system and the make and model of any other devices.

Also, what exactly about the speakers do not work? Can you pair them, are they seen by the system, etc.

Thanks for your response.

The major problem now is with the two speakers plus the new dongle itself, which does not install (details above). My other Bluetooth devices are a mouse and a Lumia 435 Windows 10 phone. However, these two devices do work and seem to have improved with use, although they are still a bit unreliable.

The mouse works OK with an Android Galaxy Tablet, which is what it was intended for. The phone has been difficult to pair. I have had to try many times. The code shown on the phone while pairing is always correct but when I click 'yes' to the query the computer always responds that it is wrong. Then it eventually gets accepted if I have the patience to keep trying. Thereafter communication with the phone is quite good.

A significant point is that the speaker(s) (HX-S10) work fine with the phone though now not at all with the PC (which is what I want them for). They did work (one at a time) before W10 upgrade, then stopped. The procedure can hang at every stage: detection (but usually the speaker is detected and listed), pairing and connection. But if it get as far as connecting (so one thinks it is going to work) I find that the sound still does not come from the speaker but from the PC.

I am disappointed about the dongle, which I expected to resolve the issue. But as described above, it is not installing which I presume is a failing of the W10 PC. What does 'needs further installation' required signify? I have emailed the manufacturer, Cambridge, but suspect that they deal with merchants rather than retail customers.

I see the Bluetooth driver listed both as MS Driver but also as Realtek BT Bus Driver.

One extra thing I am not clear about is, if the dongle was working should I leave the PCs Bluetooth service off or on? As the dongle has not worked I have not been able to test this.

If you have pared the speakers with another device, such as the phone, you might try disconnecting it prior to pairing with the computer. Some devices appear to be capable of pairing with more than one device but others may not.

Turning off the Bluetooth on other devices or getting them out of range may help simplify your troubleshooting.

Just a note, if I start iTunes before I have a Bluetooth speaker or headset connected, it is very hard to get it to move from the computer speakers to the Bluetooth device. So I always try to connect the Bluetooth prior to starting iTunes.

Make sure and check the playback devices you show by right clicking the speaker icon and selecting that option. It may even be necessary to disable another playback device to get sound to jump to another one.

I am aware that there can be problems with BT connectivity --- I had hoped this had been improved since I last used BT, years ago. I only switched on / paired with the phone long after failing to get the BT to work properly or at all on the PC. It was mainly to check if the speakers had become faulty but clearly they are not as they work right away the phone. Nevertheless, I will switch BT off on the phone when I try to connect the PC.

Should I try installing the latest Realtek driver? I have seen advice against always updating drivers and I have had some bad experiences, losing my webcams and then all my sound services for weeks. I only got the sound back by installing an old Windows 8 driver. I have two driver updater programs, one say 'all drivers are up-to-date', the other says '30 drivers are very old -- update now."!

If there are some specifics about your system, it might help. How old and what devices are you using.

You might check the Device Manger to see what your Bluetooth section is showing. The attachment shows my current listing which includes a Bluetooth Speaker set and a Bluetooth Headset.. 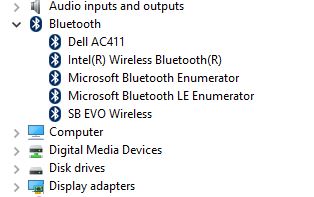 You can see the new dongle with the yellow error badge. The supplier is sending me a new one to try, though I will be surprised if it works.

My Quantumn View 2-in-1 Tablet PC is just over a year old. Upgrade to 10 was August 2015. MT and other drivers are often shown as 2006 but up-to-date.I think problems with Bluetooth started with the upgrade or possibly the November update. Most addons are 2015/6
Ad

Since you already have a Bluetooth Radio, I would not expect a Generic version to be working. Try uninstalling that one.

If you want to use the dongle can you turn off the built-in Bluetooth in your Bios settings.

All of my systems have built-in Bluetooth and only show the 3 drivers. The Bluetooth Radio driver may be an older version but do you know the driver for the dongle is for Windows 10?

One part of upgrading a system can be drivers are held over and not replaced correctly. If you can't get it working, uninstall all Bluetooth drivers and check the box to remove all drivers for the device. Then let Windows 10 find drivers. I would try to stick with the onboard device, but up to you, of course...