Can anyone explain this? On a couple of computers I use regularly, I get this message in the settings. I have tried all the known "fixes" from what I could find on the Web. Nothing wotked.
Whenever I boot up from cold each day, and look at the settings - updates, this is what I see. All items are working without faults, updates are checked and yet, the next day, the date of the last check is wrong. 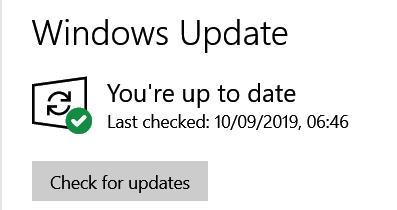 What happens if you open PowerShell and enter the following command?


Code:
Does it display a list of updates with the correct Date?

Yes. I have already tried that one.
I was thinking it may have an association with putting an image back, after some of my "experiments"
Last edited: Oct 21, 2019

Possibly. How old was the image?

A timestamp used to be stored into the Registry under the value LastSuccessTime but they ditched that ages ago.

I'm not certain, but I presume they now use API for doing that.

If your image was old enough it might still have the old registry entry, but given its deprecated, I can't fathom why it would affect you now.

Apart from that any significant update via Windows Update Service should remove the deprecated value anyway.

An interesting mystery you have there

I guess the logical things like confirming Date and Time settings are correct and CMOS battery is fine, you would have already done.

I just had a thought about your mysterious problem.

The other day I had an issue installing an update on my second hard drive. The Update History indicated the update had failed, yet when I downloaded the MSU file for that update an attempted to install it manually, it reported the update was already installed.

I decided to go with caution, and assume the History message re the update failing might well be correct, so I via a command console I uninstalled the update, then ran the MSU file and installed it again.

During that process the dialog advises you it is updating the Windows Update cache [ i.e. writing information into the C:\Windows\SoftwareDistribution\Download directory ].

Given the issue you raised is affecting two computers, both when you apply a previous image, it got me thinking. Is it possible the cached timestamps of individual updates are what you are ultimately seeing posted to your Screen.

With that in mind, have you considered stopping the Windows Update service, and renaming the SoftwareDistribution directory to .old, so you can restart the computer and allow Windows to create a new directory, and therefore a real time Windows update cache too.

Perhaps that would sort the issue.
Ad

I'm with you! Ill give it a try.
Obviously, now I am getting deeper into it, the only problem is it is not actually recording (in a log somewhere?) that it has actually updated. Maybe tentatively, the Sofwaredistribution folder
Later. This is becoming fascinating!!
I find I have three softwaredistribution folders. The last one in my picture is totally empty.
At your leisure, would you (or any readers) look and see if you also have an empty folder there.

I might be getting there. I copied the entire contents of the second shown folder, to the empty one. Several reboots and all seems ok - so far.

Yes that Directory is present on my build too

Regedit32 said:
Yes that Directory is present on my build too
Click to expand...

Is it empty?
Ad

There are two hidden directories inside it, but essentially, yes its empty

Ah well. I examined many parts of Windows, checked a lot of the registry - nothing amiss. So I chickened out and made a fresh install. All working ok now, so I'll never know!

You were the only member interested in this weird happening. You might be more interested in the follow up?
The fresh install, eventually gave way to the same problem! It would seem that it is something unique in my customisation - absolutely no help on the web, although others have experienced it. The MS help page actually closed the thread, would you believe.

Anyway, I am happy that I am, indeed, totally up to date. But my investigations lead me to the cause, but not the cure. It seems that it is getting the information from the update record in "Programs and Features". .Installed updates. My own guess is that it should be updating this item, but is not!
Ad

Hmm that is odd.

I assumed the timestamp for the update was a calculation of the time on Microsoft's server +/- User's time zone.

With the last couple of updates, I've been monitoring the additional SoftwareDistribution directory located @ C:\ProgramData and there are no changes there. I'm still curious as to why it even appears there at all. It does not appear to be used.

I was not aware Microsoft had a dedicated page to this Time issue. Are you referring to their website, or a thread you access via the Feedback App?
Ad