My cursor on Windows 10 seems to freeze / disappear every time when I wake up my laptop from a 'sleep' state. Sometimes it takes multiple reboots to get the cursor back. I have seen other posts online about this problem, but unable to find a fix. I am almost tempted to go back to Windows 8, which used to work OK for me. Do you have any suggestions? Details listed below. Thanks in advance!! 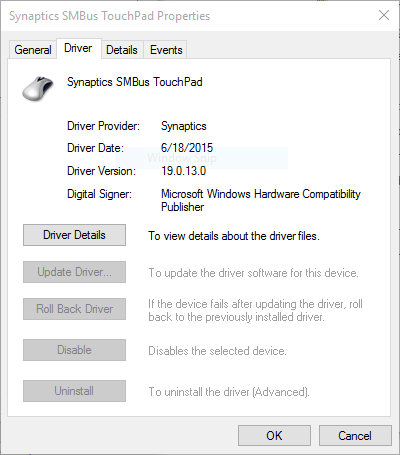 I have the same problem with a PC Specialist laptop and the same Synaptics touch pad.
Started after I installed Windows 10
T

I think I have now sorted the problem... I went into device manager, found the synaptics touch pad entry and "rolled back" the driver --- the one which was installed was June 2015 and the one which I rolled back to is dated 2013. Seems to be working now. 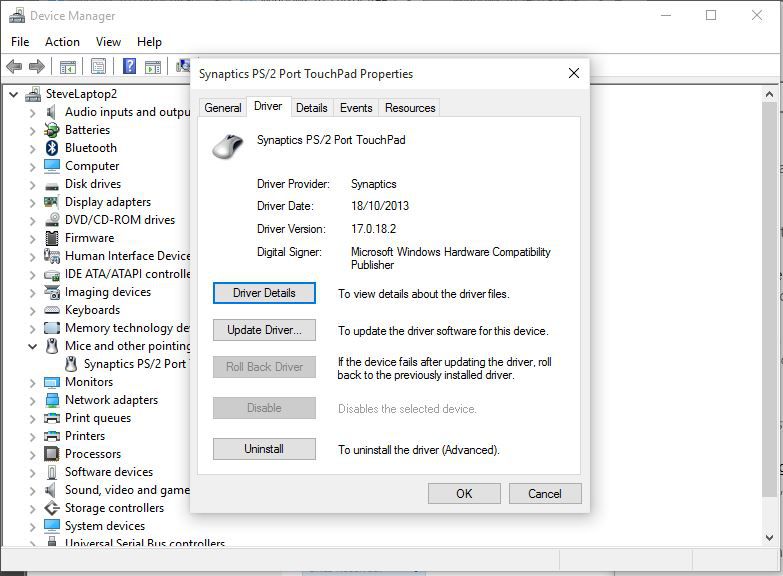 BUT it worked for about half and hour --- then I was automatically "updated" with a new driver by Microsoft and the problem was back
There is no way to turn off automatic updates in Windows 10 apparently... So without "stopping the update service" I'm stuck.
T

Similar problem for me after update. Mousepad works for two clicks and than freezes. Had to connect external mouse to get laptop going. No fix with rolling back drivers.
C

Same problem with Sony Vaio SVS1512X9. Seems that nobody identified the solution yet.
Ad

I have the same issue. SONY VAIO SVS131190X
Everything started after computer woke from sleep, before even logging in, had notification that a Windows Auto-Update had been done. logged in and TouchPad stopped working. Went to settings, roll-back driver did not work. Uninstalled completely then allowed Microsoft to search for newest driver, restart, and then worked again.
However, when I closed the lid for a long period of time and woke from sleep again, it stopped working. This is the third or fourth time I am doing this.... It does not work again unless I uninstall driver completely and then re-install.
Disable auto-updates? 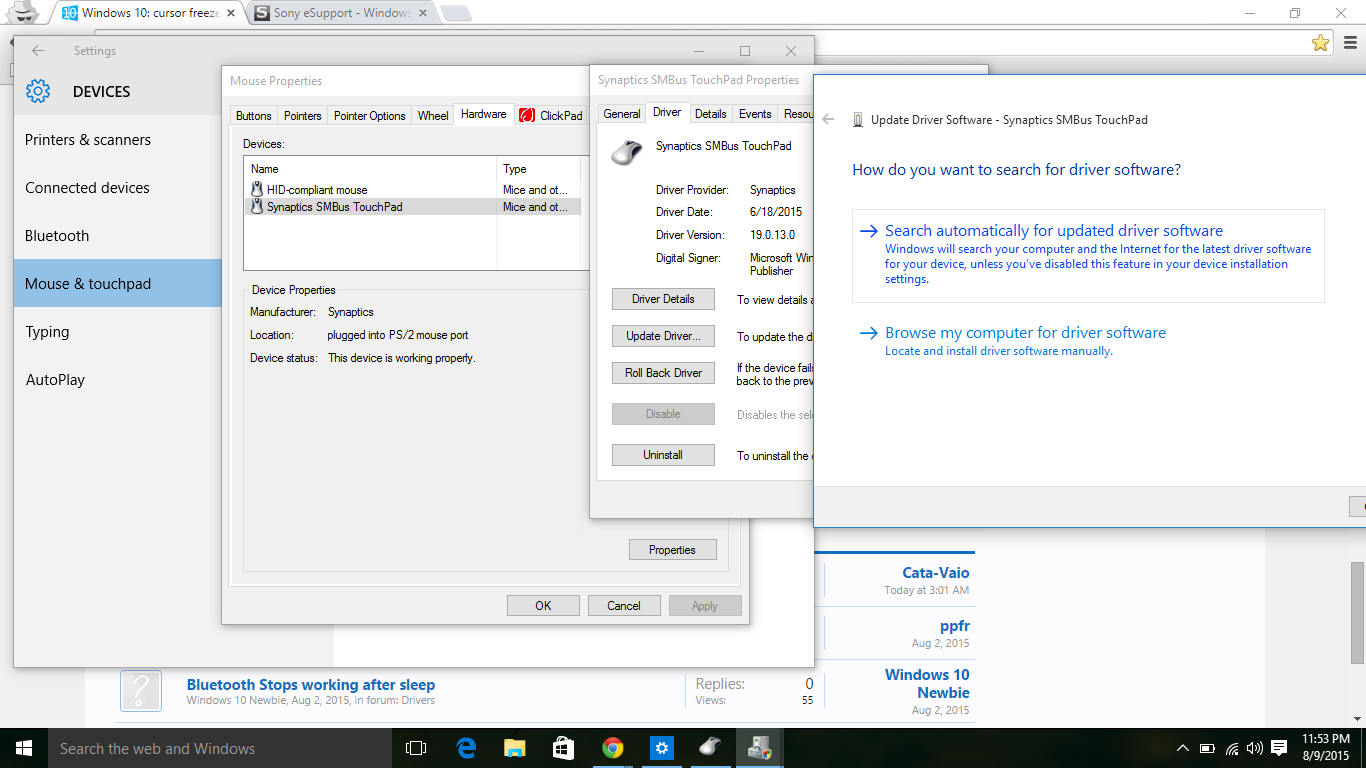 I had the same issue with my touch pad. I had to plug in a USB mouse. Go to your device manage and uninstall the corrupted mouse/touch pad driver. Reboot the computer and windows will automatically reinstall the driver. Worked for my Toshiba lap top.
A

Say no more guys! I found a fix!

Some background, I spent around a month working on this issue, getting everything from a non-working mouse at boot to bluescreens as soon as I touched the trackpad. The most annoying one by far was having everything work fine until shutting my laptop, opening it back up, expecting everything to work and having the mouse freeze.

1. Go to http://www.sony.com/drivers/ and download the touchpad drivers for your laptop (notice also, there are three different driver pages for most laptops I believe, Windows 7, Windows 8, and Windows 8.1. The Windows 7 drivers caused bluescreens on my laptop, but the Windows 8 drivers worked fine. YMMV)

2. Go to This PC (not Quick Access, but This PC, where it shows your drives and all).

3. In the bar at the top of the window you'll see "System properties", and after opening that, along the left, you'll see "Advanced System Settings"

4. Go to the Hardware tab and open "Device Installation Settings"

5. Select "No, let me choose what to do" and (under that) "Never install driver software from Windows Update". This'll stop Windows from "upgrading" the Synaptics driver that we're about to install to that non-working version in OP's screencap.

6. Go to Device Manager, Mice and other pointing devices, right click on SMBus (or whatever's installed there now), and hit Uninstall. NOTE: It's VERY important that you check the box that says "Delete the driver software from this device", otherwise it won't work. Hit Ok.

7. Wait, it'll probably prompt you to restart, if it doesn't, make sure it's finished, and restart.

8. Run the driver software we downloaded in Step 1. The first time I ran it, it only seemed to uninstall some other Synaptics software. I had to run it a second time for it to actually install the driver software. I knew it was installing because it made me agree to a license agreement, but, again, YMMV. Restart once more after that, and your laptop should be working right as rain!


It sucks that it's so complicated, but I've had no problems to mention since doing this. I'll try and keep this tab open for a little while and help anyone who has questions. Oh, and for the record, I have an SVS151A11L, but apparently that model actually covers multiple laptops, and my specific model # is SVS151190X. You will need this for finding the right drivers, so the best way to get it is typing System Information in the Start menu, and looking at the model number. If it's any help, the Synaptics driver version that worked for me is 16.2.16.3
A

The only touchpad driver I found in http://www.sony.com/drivers/ for my Sony Vaio SVZ13114GXX is for Windows 7. (
Ad

Downloading and installing drivers from Sony is a terrible idea, most of these pc's with issues were made for windows 7 and sony has not updated recently, Also when you try to install it you get prompted that there is a newer version installed and if you want to install that one you must uninstall the previous.
Download the most current Synaptics driver here: http://www.synaptics.com/en/drivers.php

However. I did need to use the driver from their site.
The one windows found worked just fine. It just seems that windows needed to establish a completely new directory for this driver. My rollback was from years ago in the Windows.old file.

THIS WORKS:
I uninstalled driver and device completely (so it no longer showed up on the device manager)
Right Click 'Synaptics SMBus TouchPad' --> Uninstall. Then restarted my computer. After boot, Windows added the device and I went to device manager to make sure it had searched for newest driver. and boom! have not had an issue since.
I have the backup of synaptics driver just in case...
Last edited: Aug 12, 2015
F

I had the same problem on updating my Samsung ultrabook np900x3e fm windows 8 to 10...
The pointer worked while turning on but then just frozen....
I used the keyboard (really sucks) pressing tab key to get to mouse drivers and found the "roll back driver" option.
Rebot, than worked just fine!

Same problem here with my VAIO SVZ1311C5E, I'm working so far without the Sleep/Hibernate functions, just rebooting every time.

In this US Sony Support page ( http://esupport.sony.com/US/p/support-info.pl?info_id=1596 ) is states that ''.....Passing these initial tests does not guarantee full functionality of your PC with Windows 10 and Sony is continuing to do further testing and will be providing additional compatibility information and/or Windows 10 drivers later in the year...''

Are we to believe SONY will come up with a new driver?

I did a mix of all the things that have been written and here is my summary (thanks Aris for the clue):

1/ Download your old VAIO touchpad driver from the VAIO support web site
2/ Then use UNIEXTRACT (http://legroom.net/software/uniextract) to decompress the binaries
3/ Keep the last Synaptic software installed
4/ From the devices manager, select your touchpad and choose to do a manual update of your driver, select the directory where you've decompressed your old touchpad driver (I've used the first one in the list)
5/ Restart your machine
6/ Enable Hibernation

CBrown, as noted in the link I already have posted above, after some time WIN 10 is set to automatically check and reinstall its own 'new' driver, so you will find the problem has resurfaced. I suggest you follow the instructions I wrote and follow the procedure that will make WIN 10 leave your 'old', working driver in place.

My issue is with an HP2000 that was a happy Windows 7 device until I upgraded it to 10 after a pleasant experience upgrading an 8 to a 10. My 8 is still working with no problems except when I run Microsoft Jigsaw, and then then my Synaptics touchpad freezes when ads change. So I just wait. It is free.

My 7 touchpad has a mind of its own. It maximizes or minimizes at will. When I type, it moves where ever it wants to. Touch-typing has taken me to new levels of patience. Scrolling is unpredictable. I have uninstalled, reinstalled, spent a couple of hours with Microsoft chat, and sent at least two emails to Microsoft which have gone unanswered, so finding this thread has given me a bit of hope. First I am going to get a mouse! Been down the path of navigating by tab/enter. Thanks to all of your entries. I will post my results.
Ad

My Asus touch pad turns on and off with,
function f7. I don't know if this is universal.
You must log in or register to reply here.