Windows 10 will not allow me to change my virtual memory

I'm using a Toshiba laptop, 64-bit. I can't begin to tell you how SLOW Windows 10 is. I found a place on the internet that gave instructions to change the virtual memory which seemed to indicate that it would speed up Windows 10. I desperately need it to speed up. The virtual memory is set at 1280 but the recommended size is 1904. I followed the instructions but when I rebooted, the original setting was still there. Am I not understanding how this works? I thought it should show the higher value that I entered. I've tried making this change three times, all with the same result. I don't know what the values should be. I just took the recommended amount for the minimum and doubled it for the maximum.
I attached screen shots.
Memory1 shows the screen before I made changes, showing the paging file size as 1280.
Memory2 shows the next screen where I made the changes, 1904 and 3808.
Memory3 shows the paging file size at 1280 after the changes and reboot.
Memory4 shows the next page where you can see my changes but the paging size didn't change.
It is quite possible that I'm misunderstanding how this works but the speed of Windows or any applications has not changed. And that was the point of making these changes. 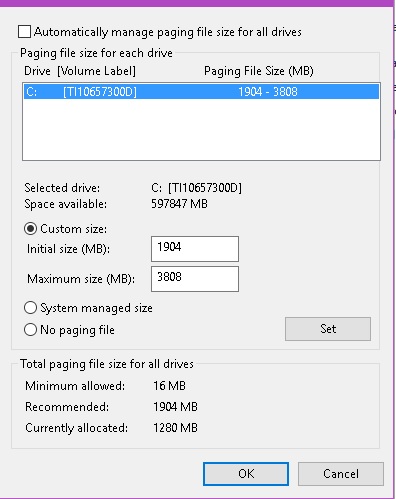 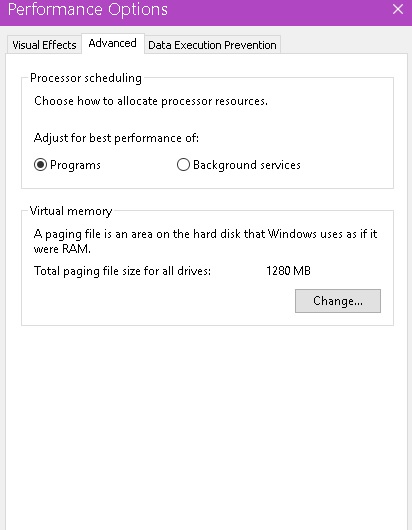 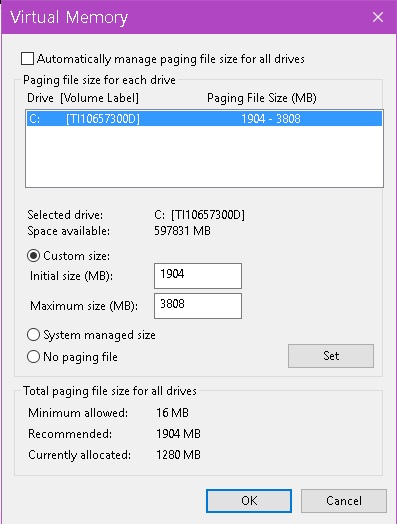 Set the maximum and minimum to 0 (zero), click the set button.
Reboot the computer.
This should effectively delete the page file.
Go back and reset the maximum and minimum to the same size (based on best practices, one and one half times the size of your physical memory).
So if you have two gigs of memory you would enter 3072 in both boxes and click the set button and reboot.
Generally for 2 gigs I just double it to 4096 in both and leave it at that..

I would just tick the box that says System Managed size then click on Automatically manage...have to click them in that order strangely enough and leave it at that. My machine with 8GB of ram then sets it to a max of 1917 Mb. After the reboot it has recommended 1917 and currently allocated 8GB which is right.

If it is ultra slow you have a problem. Try a restore, try cleaning (Ccleaner) and debugging (malwarebytes), if that does not work you may have to reset it as a last resort.

OMG, nothing should be this difficult. I tried what Trouble suggested, nope didn't work.
Then I tried what Tim Locke suggested, and you guessed it, it didn't work either.
Then I spent the next hour trying various combinations of what they suggested and probably rebooted 50 times with all the experimenting and it still shows that 1280 is allocated.
I have 8gb of memory, and about 500gb of free space on the hard drive. I thought I'd make it easy and allocated double the 8gm so I entered 16384 in both places, didn't work. Then I decided maybe Windows couldn't handle such big numbers so I went with 1.5 times my memory or 12288 in both min and max, didn't work. I won't bore you with all the different combinations I tried.
As I said, nothing should be this difficult. There should be one answer for a problem and it should be documented somewhere.

Was Windows 10 one of those projects where the analysts say it will take 18 months to complete and management says too bad, it will be rolled out in 6 months or you are all fired? I'm basing this question on how many problems I've had with it and how many weeks I've spent trying to get it to work almost as well as Windows 7 and I have a very simple setup.

Are there changes in the registry file that I can make that will change this setting?

I'm not sure that I would worry too much about the pagefile / swapfile.
With 8 gigs of memory you probably don't actually need one at all, except to facilitate the collection of dump files in the event of a Blue Screen.
With the new Windows 10 memory management functions including memory compression there probably isn't much being actually paged to disk any how.
You can watch this video if you're interested as it explains how Windows manages memory with respect to compression and the lower necessity for actually paging to disk.
https://channel9.msdn.com/Blogs/Seth-Juarez/Memory-Compression-in-Windows-10-RTM
If your computer is really running slowly, then I would first inspect your startup items to see what you have going on that might be busying it up.
And.... you might want to check disk the C: drive as well as manually defrag it a couple times if it's a spinner. If it's an SSD you might want to look into a possible firmware upgrade if available
Ad

morlaine said:
. I can't begin to tell you how SLOW Windows 10 is
Click to expand...

Just how slow is it? Do you mean slow to start or unresponsive when selecting items like files, browser, start menu etc.?

Okay this must be my mistake. I was trying to find ways to give it more workspace (virtual memory?) to work with so that it would run faster. It's running like my Win7 did when it only had 2gb of memory, so I thought more memory space would help.

I've only had this computer since November 21st and have spent every day except for one that I was out of town, some of them 18 to 20 hour days, trying to get Windows 10 to work at least almost as well as my old Windows 7. Sadly, I am seriously thinking about going back to the Windows 7 laptop. I can download 3 files at a time from the internet on the Win7 (it's 5 years old) and the disk drive is almost full, I can only download one at a time on the Win10, more than that and it just stops. The best example is getting a webpage to open. I can go to the bathroom and come back and about 50% of the time, it hasn't opened. It's the same router, the same ISP provider. The only difference is the laptop I'm using. And it's not just the internet. It is also Libre Writer, Thunderbird email, my book inventory. Everything is noticeably slower.

I suppose I could download stuff on the Win7 and copy the downloads to a data stick and copy from there to the Win10. What a pain in the butt that would be. I set up a Work Group but the Win10 rarely finds the Win7, maybe only 30% of the time. I spent MANY days on that issue and still don't know the cause or how to get it to work 100% of the time. Or even 90%. I got an ethernet cable, can't remember the name, but it's a special one that is suppose to allow the two computers to be hooked together that way (not through a router) and I wouldn't need the network. But I've been working on these other problems and haven't worked my way down the list to that challenge yet. I thought it would be a better idea to get the one working alone before I threw a second one in the mix.

I checked on doing a Disk Cleanup and it would save me 577mg, hardly worth it. It says it's not fragmented. I checked the drive and there were no errors on it. So if it isn't the hardware, then it stands to reason it is the operating system. Doesn't it? I'm not a techie but what else is there?

I attached a screen print of the items in the Startup tab on the Task Manager screen. I think I have a pretty simple system. If you see anything that might cause the problem, please let me know.

Well, enough of my bitching. I do appreciate your help.

There is no excuse for the poor performance you are describing.
I would start with a clean boot and go from there.
https://support.microsoft.com/en-us/kb/929135

I would get rid of Avast and Efficient reminder. replace avast with defender...which may happen automatically.
Turn off disk indexing.

I would consider removing all those pretty things like money, weather and news that sit there working all the time.

Do a clean boot.

Then I'd run task manager while the machine is doing something that you think is far too slow and see what is using cpu., memory, disk or even network and let us know.
Ad

I'm back but only for a minute. I've been neglecting my children trying to solve all these idiot issues. I got the message when one of them tried, almost successfully, to push my laptop off my lap into the floor.

I did a search on the C drive for files containing something, don't remember at the moment but after a couple of minutes it brought back a list of 210 files and 8 folders. I then sorted them in alphabetic order. I timed the sort and it put a message on the screen saying Working On It. It took 2 minutes and 4 seconds to return the sorted list. Then for a different list, this time 18 items, I also timed it. It took 1 minute and 2 seconds to sort the list. I'd bet that I could sort 18 documents into alphabetic order manually in 1 minute and 2 seconds. It's just crazy that it should take so long. And those are things located on my computer, not requiring internet access which throws a whole new monkey in the wrench.

I hope everyone had a safe and happy New Year.
Ad