Here I am again with another problem. Seems like every time there is a Windows update something goes wrong with a program. I use Windows Media Player (my preferred player) and since the last update this is what I get when I try to play a .mp4 file.

how do I correct this and have my .mp4 files play again?

Could you tell us, what the source of this video file is?
What is "D:\DESKTOP (D)\New folder\My Movie.mp4"
It appears like perhaps a network location?
Which might explain the "server execution failed" message.
IF you copy the .mp4 locally does it produce the same error message?

I shot a video which I named 'My Movie' with my Ipad and downloaded it onto my PC computer into a folder named New Folder which was located on my Desktop . Until I download the latest windows update I did not have a problem viewing this video in its present location using the Windows Media Player. But after the latest update which was - Update for Windows 10 Version 1607 for x64-based Systems (KB3150513) that was installed recently was when I could no longer play any of my .mp4 video's or music, no matter in what Folder they were located..
I am not sure what you mean by 'if you copy .mp4 locally does it produce the same error message?' What do you mean by the word 'locally'?

nownthen said:
What do you mean by the word 'locally'?
Click to expand...

Nevermind, I was just thinking that since the file path was indicating D:\ which is not typical in a standard installation of Windows 10 as a path to "Desktop", that perhaps the file was located somewhere other than a local disk.

IF you right click the file and choose "Open with" and select "Movies & TV" do you get the same error?

Dear Trouble; More info about the D:\ Drive-- The reason for the D:\ drive associated with the "Desktop" is that my PC has a very small C:\ drive only 149GB and a very large Data D:\ drive 1.67TB. and I was quickly running out of space on my C:\ drive so I had to move most of my Folders from the C:\ drive to the D:\ drive – The D:\ drive now houses - the Documents – the Pictures – the Videos – the Music – the Desktop – etc and the C:\ Drive is used mostly for the Program Files. I think that is what you were asking when you wondered why the Desktop had the D:\ association.
And to answer your question I can play the .mp4 files when I chose to "open with" Movies & TV and also with VLC program. But I used to use Windows Media Player for the .mp4 files until just recently. And I would like to know why I can't use it now.

nownthen said:
my PC has a very small C:\ drive only 149GB and a very large Data D:\ drive 1.67TB. and I was quickly running out of space on my C:\ drive so I had to move most of my Folders from the C:\ drive to the D:\ drive
Click to expand...

Understood..... I do something very similar on my computer.

I wish I had a definitive answer for you.
Obviously since you can play the video in two other applications you have the necessary codecs.
The thing that confuses me is the actual error message "server execution failed"
IS it possible that the path to that video is not included in your Windows Media Player libraries (where it looks for content to include in the interface under "Videos")?

Other than that, I don't have a clue.
I only have a single .mp4 video on my computer and it plays well in Windows Media Player, Movies & Tv, as well as VLC, so it's a mystery to me and I can certainly appreciate your frustration.
Ad

Thanks for your attention to my problem. Should I uninstall the Window's Media Player and then reinstall it? Could you give me the best link for reinstalling the Program? 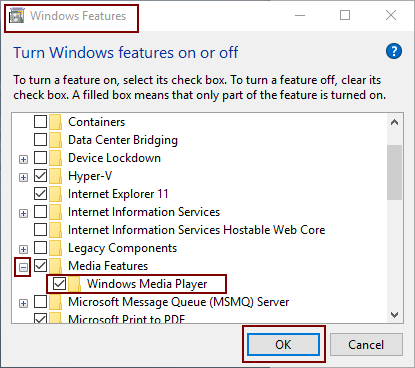 I had done the instructions you sent before I wrote to this wonderful site but I tried them again but still doesn't work. For the time being I will probably stick with using VLC and/or Movies and TV - but I will continue to look for a solution to why the Windows Media Player just stopping working. If you ever come across an answer I would appreciate if you would let me know. Thanks again for your attention to my problem.
Ad

You could try this
Type msdt.exe -id WindowsMediaPlayerConfigurationDiagnostic in Start run and hit Enter to open the troubleshooting wizard which will help you reset WMP to default settings.
but I suspect that WMP cannot play MP4 files.