Tim As soon as I read your post I disabled updates. I wasn't sure what you meant "Doesn't look very exciting" That could mean nothing new or problematic. LOL
T

How to stop windows from updating to Worthless 17677 and update to 17682 instead?

Norton, I read the blog about the build. As I don't use Edge, I could find nothing of any use to me. I had re-entered the Insider program from 1803 to 17677 a few days ago and that wasn't full of super new features either. But I will persist until something is worth having.


What’s new in Build 17682
Sets Improvements
We’ve heard your feedback and have been hard at work updating the new tab page to make it more obvious you can launch apps. When you click the plus button in a Sets window, you will now see apps included in your frequent destinations list. You’ll also find that we’ve integrated the all apps list into this page so you can browse your apps, rather than just using the search box – apps that support Sets will launch into a tab when clicked. If you have News Feed selected, simply click the “Apps” link next to “News Feed” to switch to the all apps list.

Note: This is a server-side change flighting up for Insider who is on recent builds.

Managing your wireless projection experience
One of the things we’ve heard from you is that it’s hard to know when you’re wirelessly projecting and how to disconnect if your session especially if started from file explorer or from an app. In today’s build, just like remote desktop you’ll see a control banner at the top of your screen when you’re in a session. The banner keeps you informed of the state of your connection, allows you to quick disconnect or reconnect to the same sink and allows you to tune the connection based on what you are doing. This tuning is done via the settings gear, which optimizes the screen to screen latency based on one of the three scenarios:

By default, all connections start off in productivity mode. Stay tuned to this space as even more functionality is coming to the banner! Can’t wait to hear what you think of banner. Let us know via the Feedback Hub!

RSAT is now available on demand!
What does that mean? You no longer have to manually download RSAT every time you upgrade! Just go to “Manage optional features” in Settings (the fastest way there is to search for that) and click “Add a feature” – you’ll now see all of the RSAT components listed. Pick the ones you want, and the next time you upgrade Windows will automatically ensure all those components persist the upgrade (just like any of our other on-demand features, like speech resources or OpenSSH). Thanks to everyone who logged feedback asking for this! We’d love for you to try this out on today’s build and let us know what you think.

Note: The “Add an optional feature” page will take a long time to load the features the first time you go to the page. This is still a work in progress, and you may find that some of the RSAT components fail to install and/or launch. We are working to address this. If you do encounter installations issues, deleting this registry key may resolve them: HKEY_LOCAL_MACHINE\SOFTWARE\Microsoft\Windows\CurrentVersion\Policies\Servicing\LocalSourcePath.

Post-upgrade setup
You may see this window showing after you upgrade. Don’t worry – all your stuff is still there! We know some of you bought and setup your devices a long time ago – the features available in Windows have changed since then, so we’re giving you an opportunity to go through the setup questions you may have missed to ensure your device has the best setup possible. Click “Let’s Go” to go through those setup questions or click “Skip for now” if you want to go straight to your desktop. The conditions for showing this page are cloud programmable and may change over time. 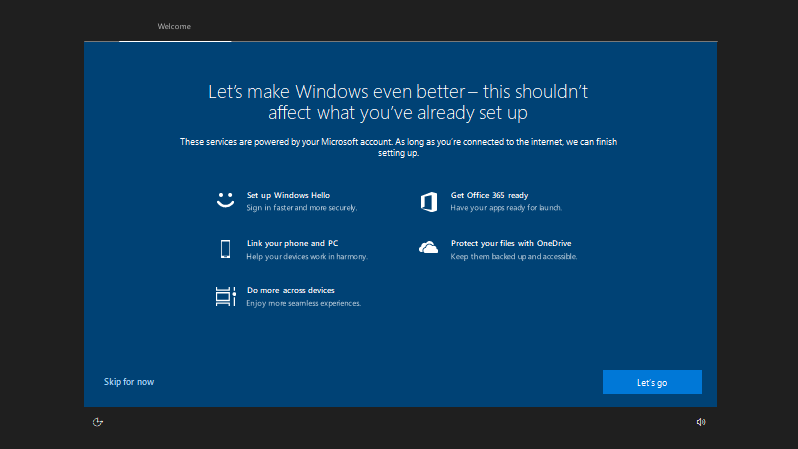 General changes, improvements, and fixes for PC
Known issues
Known issues for Sets & Office
REMINDER: Upcoming Bug Bash
We are excited to announce the dates for the next Bug Bash: June 22nd – July 1st. And we will hold a Bug Bash Webcast on our Mixer channel on June 27th – exact timing will be announced closer to the date. We’re excited to do another Bug Bash with our Windows Insiders!

Tim Thanks! There's nothing there for me either, it's just another useless exercise and offering from MS.
T

this is even worse than the last. I booted to my backup drive that was my clone to 17672 and switched to slow lane.
Ad

Installed and all went well, but when I rebooted one of my IP machines this morning.....
Can't say that they didn't warn me but.....

SOURCE: https://blogs.windows.com/windowsexperience/2018/05/31/announcing-windows-10-insider-preview-build-17682/
But I think this is a first for me for an insider build.
I just let it do it's thing and reboot.
It restarted fine after it rebooted itself.
So, I ran the .dmp file through the windows debugger (windbg.exe) and found it blaming a file called
bisrv.dll "Broker Infrastructure Service" which is a Windows system file.
Interestingly the one currently in C:\Windows\System32 is 816KB 5/26/2018
The one remaining in the C:\Windows.old\Windows\System32 is 848KB 5/20/2018

Trouble said:
Installed and all went well, but when I rebooted one of my IP machines this morning.....
Can't say that they didn't warn me but.....
SOURCE: https://blogs.windows.com/windowsexperience/2018/05/31/announcing-windows-10-insider-preview-build-17682/
But I think this is a first for me for an insider build.
I just let it do it's thing and reboot.
It restarted fine after it rebooted itself.
So, I ran the .dmp file through the windows debugger (windbg.exe) and found it blaming a file called
bisrv.dll "Broker Infrastructure Service" which is a Windows system file.
Interestingly the one currently in C:\Windows\System32 is 816KB 5/26/2018
The one remaining in the C:\Windows.old\Windows\System32 is 848KB 5/20/2018

Saw this and booted my Insider machine and Lo and Behold I got a GSOD as well, first time ever! Booted fine after that.

Wow, the new version even recognizes its own files as a virus.Never had that before and it wasn't there before the update....

Tim Locke said:
Booted fine after that.
Click to expand...

Grizzly said:
Wow, the new version even recognizes its own files as a virus
Click to expand...

Interesting. I just did a Custom full scan on my system drive and it didn't find anything, so....
I looked for that particular path and

Although admittedly, it's a nominal install with not too much additional software installed.
Ad