This update includes quality improvements. No new operating system features are being introduced in this update. Key changes include:


For more information about the complete list of affected files, see KB3197954.


Downloaded and installed ok will need a restart
Ad

Has made no difference to my machine. I got it and then restarted yesterday.

All these things in:


Would be useful to know in detail as probably it is some little bug in one or other of these that leads to people having problems. 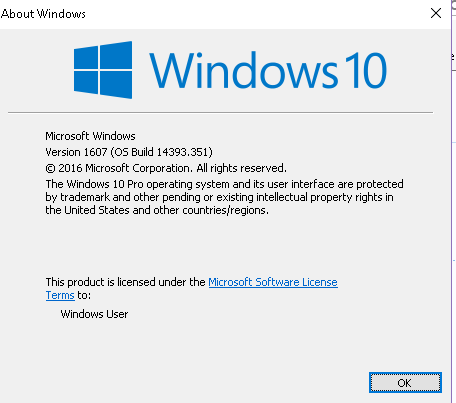 Updates the build again. I havn't looked closely, but I think there are a couple of xtras in the settings also.
Last edited: Oct 28, 2016

Got it on all my PCs but it hasn't hit my phone yet.

While the topic of this thread suggests that it is for PC and Mobile, I seem to be having a hard time finding any supporting information that includes "mobile".
Last edited: Oct 28, 2016

I got it this morning, successfully. It went soooo smooth that MS wants me to have it again this afternoon.
Ad

Got it, installed without a burp...no longer am I maxing out CPU while watching HD video on Youtube..either by accident or by design has yet to be determined.

The only problem that I've discovered so far, was that for some reason the upgrade switched my default playback device from my speakers to my monitor.
Not sure why as both my monitors are identical, neither have buit in speakers, must have something to do with the HDMI on one and Display Port on the other connections.
I switched it back to my speakers and all is good.

yeah, been "updating" since last night, my ordeal started when I installed W7 clean install on an older laptop, the WU just wouldn't run, just like it was in Vista, well after a lot of messing around and researching on line, I did find the solution to the WU problem on 7, seems MS did some changes to the updater in newer KB's, well a clean install didn't have these "new KB's" so it wasn't able to use WU, but of course you HAD to have them to use the update, smirk, man.... anyway found you had to manually D/L 2 KB's as .msu files and install them, than it would at least go find the 500MG of updates , so that took most the night till 2am, I can only have one system on and connected to my slow DSL at a time so the 2 W10 machines were off, well of course when I turned on the desktop around 8am, it started going through the usual updates. I also had a new NVIDIA driver that got D/L'ed, this thing took out the driver I had, and than wouldn't install, all I had was the windows driver and all that gave me the wrong resolution, lolol everything was all blown up on the screen, the settings were grayed out, and no way to "roll back", it took several tries, incl D/L the regular NVIDIA driver to finally at 4:30 to get it installed, but weird thing was even the regular driver didn't want to install, only after re trying the WU 3 more times it installed, checking the list it seemed it failed at least 6 times to install., so than went to the HP laptop w/w10, that took another couple hrs to get done. boy what fun this was.

So now I made my images all around so I can be at peace lolol...

Weird how you wait for this stuff on these "Tuesdays" now but stuff ends up showing up on Thursdays or Fridays now.

I re-check all my settings after every update, especially security and how updates are delivered. I've had settings mysteriously change (for the worst) after Windows Updates.

Interesting observation with this one unlike past updates where with each one I'd lose all my update history and system restore points .. this time they're all still there..
No settings have changed either..the bewilderment continues.
Ad

Yes! I forgot about the download history and restore points that the MS thief pilfered during my quiet time.