Couple interesting feature upgrades having to do with uninstalling "InBox Apps"
AND
A new troubleshooting option.

Other than that it looks relatively routine

WOW and holy cow..... did that ever take a long time 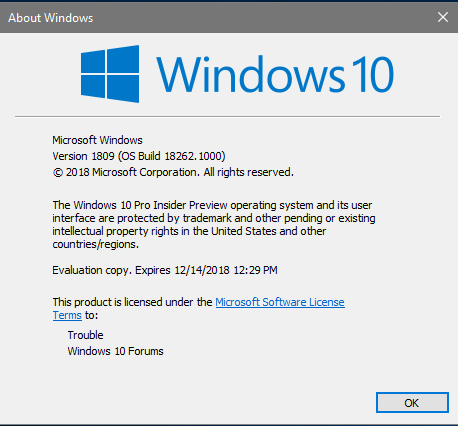 what's this "Skip Ahead" thingy you mentioned?.

what's this "Skip Ahead" thingy you mentioned?.
Click to expand...

If I may, the Skip Ahead thing is even more of a work-in-progress than the Fast or Slow Rings. I tried it once some time ago but went back to Fast Ring. Skip Ahead, to me, seems to be more for Developers in their software and/or hardware work.

Like a lot of things, when it comes to Microsoft, it's
a bit vague and nebulous and not all that easy to explain or understand.
At some point, and this happens routinely in every release preview cycle, the current Insider Preview that everyone is enjoying (read suffering through), will fork in it's development.
Nothing magical happens, it just more or less reaches a point where it gets the title of "PRE" removed from "pre-release" and proceeds as a "release" candidate.
NOW.....
At that point, if you're paying attention, Microsoft waves a magic wand and opens (for a brief period of time) what they call the "Skip Ahead" option. It's not really officially a "Ring", it's simply what will become the next Windows Insider Preview.
AND
Except for the "watermark" returning with the "pre-release" designation in the bottom right corner and build number, it's pretty unremarkable and is very much like the working Preview Build that preceded it.
That is basically what is happening now with the 19H1 builds for "Fast" and "Skip Ahead", while the "Slow" and "Release Preview" Rings finish up with what will become the RTM.
THEN....
At some magical point in development, the wand gets waved again. The "Skip Ahead" option is closed. You find yourself back on the "Fast Ring", unless you choose otherwise
AND
We wait for the development of the current Insider Preview to "fork" again and we start over. 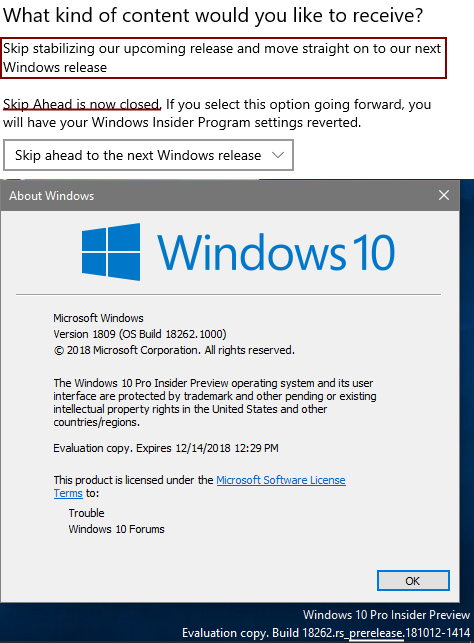 Thanks @Bighorn and @Trouble , I think I will stick to normal releases anyway and skip ahead down the pub tonight!.
Ad

Facebook is really slow using 18262 so I went back to Oct. update and fast

The update from 18252 to 18262 was quick and my laptop runs fine for a while, then fontdrvhost.exe crashes (Event ID 1000 in Event Viewer) and I get all sorts of interesting issues. Reported in Feedback Hub -- hopefully next build will fix it.

Did this https://support.microsoft.com/en-gb/help/4026529/windows-10-using-system-file-checker and it seems OK now.
Ad

Reoccurred again this morning but also build 18267 is just out and Microsoft have included this known issue in the release note:

'If you have a have a large number of OTF fonts, or OTF fonts that support the extended East Asian character set, you may experience some unexpectedly missing text across the system. We’re working on a fix. If you encounter this issue, navigating to the Fonts folder (c:\windows\fonts) may resolve it.'

I experience the issue most in Outlook 2016. Having read this, when it happened this morning I went to that folder in Explorer, then restarted Outlook and it did indeed resolve it. So at least I have a workaround. I have got lots of fonts so will see which are OTF and maybe remove them for a while.

When the issue happens things do also run slowly and I can hear my fan spin up and run like the clappers, so looks to me like this is all related. Anyway will keep this thread updated -- about to apply 18267 now.
Ad