Firewalls on all PCs is off except for WIN10 but the rules allow file/printer service through
The same primary user account is used to logon to each PC
No HomeGroup networking used. All PCs are in the same workgroup=LANSYS

Now with all that stated, I'll describe the problem.
From WIN10, I can see the list of PCs in the workgroup and access the shared folder TEMP on each PC

From WINXP, I cannot see the list of PCs in the workgroup and can only access the shared folder TEMP on the other PCs when I use the IP address of those PCs in either My Network Places, Internet Explorer or Windows Explorer. I always receive the "Workgroup not accessible ...." popup window when attempting to view LANSYS from My Network Places.

From WINXP0, it's the same as WINXP

From CENTOS, in order to see shares I use the smbclient command. When I execute the command for WIN10, the command fails and reports that NetBIOS over TCP/IP is disabled on WIN10

But NetBIOS has to working on the LAN because I can ping each PC from any PC. I executed ipconfig/all on each Windows PC and it displays NetBIOS is enabled.

So it appears that NetBIOS Sessions service over port 139 inbound traffic on WIN10 is either buggy, crippled, or broken. Has anyone experienced this scenario?
Ad

As I said, I've confirmed that NetBIOS is enabled on all PCs.

OK, yes I saw that, but double checking doesn't hurt.
AND
What about the rest of the services I've listed?

kd833 said:
The Computer Browser service is disabled on all the other Windows PCs
Click to expand...

Turn it on.
AND
anything else in my list of services above.
On the Win10 machine make sure to turn on
Network Discovery as well as
File and Printer Sharing.
Control Panel\All Control Panel Items\Network and Sharing Center\Advanced sharing settings

Wait 20 minutes or so for NetBIOS to sort out browser elections of the master browser and the information to be propagated.
Or reboot your network bringing up the Win 10 machine first.

I verified all that you stated was configured properly in my environment already. And I still can't execute file sharing through name resolution. It only works through the use of IP addresses. Do you have a home network environment setup the same as I described and file sharing is working for you?
Last edited: Oct 14, 2014
Ad

A Knowledge Base article was given to me that specifically states what is happening on my home network. An old bug that somehow was reintroduce into Windows 10, maybe? And since I have no DNS running and no other method to execute name resolution. I have to address my shared computers and folders by the IP addresses. I hope a patch is produce. Though this release in Win10 is a preview, it would be nice to prove all important aspects of the OS works before officially being release to general public.

I do not have a Windows XP Home machine (or one that is actually working right now), but other than that..... pretty much.

It's not just XP Home but any SMB client. Which would include in my case XP Pro and Samba clients. I'm not sure what these images are suppose to indicated to me. Though the third image is what I'm trying to achieve. The image doesn't tell me anything about your network configuration. Or what happens when you (from the XP Pro machine using My Network Places) attempt to access the workgroup. If you never receive connection delays or errors, I would be interested in what your Win10 setup is like. But in any case, Microsoft has confirmed my findings that there is a bug in NetBIOS name resolution over port 139 (TCP/SMB1) into Windows 10. A fix should be coming out to fix the problem on both the Enterprise and non-Enterprise editions of WinTP. I'm happy.

This is the scenario to test between your XP Pro and Win10 machines:

Test:
Run "netstat -n" on both machine to make sure there are no existing 445, 135, and 139 connections
And if you have any mapped drives, they need to be disconnected too
From Winxp opened “My Network Places” to access the workgroup lansys

Result:
Most likely you will get a failed connection with error, “workgroup not accessible…”

Why would I want to do that.
I explained how to configure your network and services and that is what I have configured and it works perfectly fine.
My XP pro can access shares on my Win10 computer and my Win10 computer can access shares on my XP Pro computer.
And all my firewalls (native firewalls that is) are on and the exceptions for file and printer sharing are in place for my subnet.

You may have some issue with some third party Security Suite / AntiVirus / Firewall or even remnants left over from incomplete or unsuccessful uninstalls of previous installations of such software.
Ad

kd833 said:
Microsoft has confirmed my findings that there is a bug in NetBIOS name resolution over port 139 (TCP/SMB1) into Windows 10
Click to expand...

I would be very interested in seeing any reference links or notes or correspondence referencing said "bug".
I guess I'm just lucky. 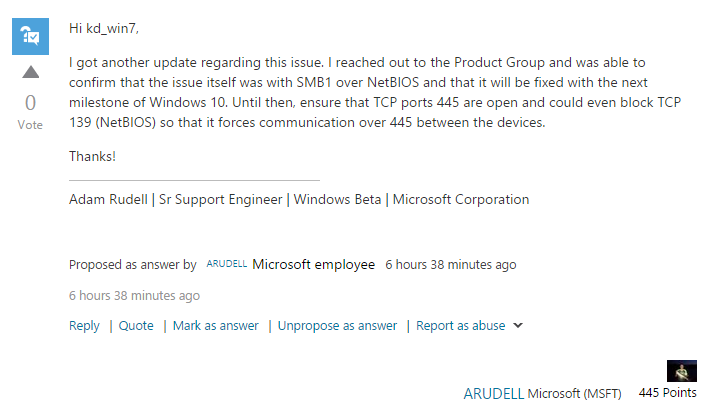 Thank You.
Upon examination of both inbound and outbound firewall rules with respect to the ports and protocols mention, I've found that they are in fact "open" (allow / private)
NB In and Out on 139 and SMB In and Out on 445.
I could not find any reference in my Win10 firewall rules referencing anything called SMB1 (maybe something to do with your Linux Distro where I'm seriously lost).

All I can say is that my Win10 and XP Pro machine could see one another in explorer's network node / network places and they could open and edit shares in both directions, out of the box. I really didn't do anything special on either machine to make it work other than enter appropriate credentials when prompted.
As I said, maybe I am just lucky.

Oh its there. Yes, you're one of the lucky ones I guess. But it doesn't mean that there isn't a problem.

The latest found at Microsoft TechNet. This is probably affecting Samba3 clients which I understand uses SMB1 verses Samba4 which uses SMB2/3. 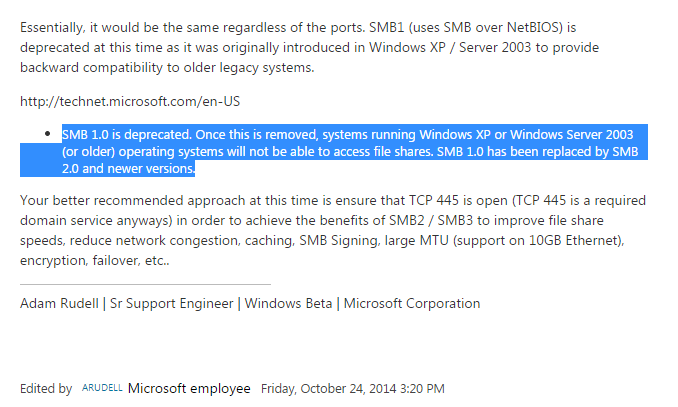 And this seems to be the solution for compatibility. Which I will try later. I hope it works.

I have a similar problem with a mixed network of multiple winxp, win 7, win8.1 and linux boxes. One of my Win7 computers connected properly to all other computers on my LAN until I installed Win10 Technical Preview.
I am currently at build 10074.
I tried everything you suggested, and re-started my win10 machine and all other computers on my LAN repeatedly. I could only see one or two (it varied) other boxes on the LAN after each restart, and no LAN printers were accessible.
I then tried Disconnecting my wireless connection through my wireless settings screen, then Connected again. Everything on the LAN now shows up now and works correctly. It also came back correctly after a reboot.
Apparently, there is a bug in the start-up process?
Ad