Pretty sure it'll come via the common Update mechanism.
Possibly the 12th which would be a normal "Update Tuesday" if such things are even "normal" anymore.

I've been away from Windows 10 since August of this year so a little behind of what's going on with Windows 10.
Thanks for the reply.

Probably important to check and make sure that you're current to date. 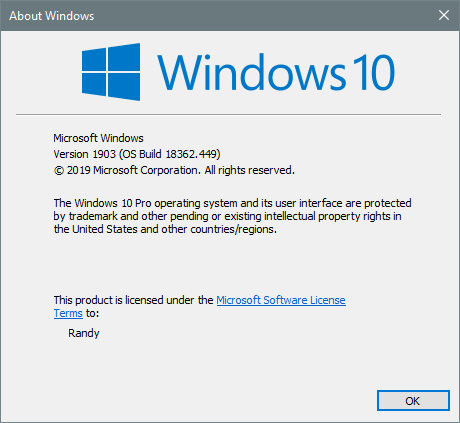 Yep the same as what you are showing so it appears I'm current.

You'll get it from Win10 Update.
Ad

Thanks for the reply and I was able to get my Windows 10 1909 update via the Windows update.

I downloaded and installed the update today without issues total time from start to finish around 15 minutes.

All appears to be running well.

Yep mine doesn't say today either.
In my case it's when I actually installed Windows 10 1903 update from an iso which I created and did a clean install.

poorguy said:
Yep mine doesn't say today either.
In my case it's when I actually installed Windows 10 1903 update from an iso which I created and did a clean install.
Click to expand...

that sounds about right for mine too thanks

I've successfully upgraded 5 PCs, 1 notebook, and 1 tablet. All were updated to 1909 from 1903 using windows update. I still have two notebooks, but they are rarely used. I believe 1909 is so little of an update. It was faster to update through Windows Update than downloading 1909 ISO. Maybe if I had twice as many machines I would have found need in downloading a new ISO.

The tablet was the worst in upgrading. Not only was it slow. It was dead when I tried powering it on. Charged it up for a few hours before getting started. The USB stick I wanted to use for upgrading to 1903 kept dropping connection for some reason. I finally setup an sd card for installation of 1903. It was actually better this way as I can not charge while using USB. I was hoping to use USB though, because that is what I use on all the other devices. Once I finally got started everything went slow but with out a hitch.

Note to self:
Next time upgrading a tablet switch to a local account. Between the failed PIN and reverting to password usage [with onscreen keyboard] every reboot, I was starting to pull my hair.
Ad

I was surprised how quick the 1909 update was.

I switched to a local account prior to the update.

I understood from your earlier post you had made your own ISo (From the ESD?)

Bit surprised at the size. Maybe a multi edition.?

What prompted you to change to a local account?

I had to create a Microsoft account to get the free Windows 10 upgrade.

I don't need a Microsoft account and from what I've read a local account is supposed to be more private and secure.

I'm not paranoid but don't care to be creating any accounts which I will never use.

I haven't gotten an update notice since April, 2019.
Ad

Well a slow day finally so I tossed caution to the wind and updated to 1903 via MCT...it took almost 3 hours from tip to tail but all apparently went OK.
Now when my wife asks me what I'm doing on the laptop, I can say I'm going to the sandbox...;-)
Ad