Reason for waiting till Microsoft advertises their new build

Windows ISO Downloader does not show the new build available yet. And the Windows Media Creation Tool doesn't mention which build is being downloaded. To spite reading 1803 was now available in an online search, it was in fact 1709 that was downloaded. I saturated our Internet connection all last night for a build that wasn't the correct one, all because I needed the new build last week. If I'm going to be forced to update, I can use the update today to save a bit of time.

At this moment Windows Insider (through Windows Update) is the only way I know to get the new build.

I have several machines that need to be updated, before Microsoft starts automatically updating them all. I need both the 32 bit and the 64 bit Install Media to minimize my data usage. We have unlimited but it is slow as molasses. To update all our machines through Windows Update would be to cripple our Internet Service for over a week. Where as I can download the two ISOs in one night.

I'm getting to the point where I have no choice but to reinstall 1709 on a few machines. If it wasn't for Microsoft and their automatic updating, I'd say screw it, and hold off another year or so on 1803. Who ever is pushing these automated updates, it wouldn't be a good idea for them to visit my home. Stupid crap everyone has to deal with every six months. I can't believe people are still allowing this to continue. A damned headache is all it is.
Ad

Are you saying the final build which will be released to the public next week, maybe, is already available and not a Insider's Preview build?

I guess I am a little confused. If the 1803 build was available as an ESD file, it would be downloaded and then the ESD to ISO converter would make it usable.

I have not tried downloading the file but assuming it is the final release could you follow the process and download the ESD file? Is that the one you say turned out to be 1709?

I'm still reasonably convinced that 180323-1312 isn't the RTM.
At least it doesn't seem to be acting like it.
I have the ISO, which I created myself from my Insider Preview machine after the install using UUPtoISO

I say this, knowing that they've released another skip ahead build today, which seems to indicate that they are focusing on Redstone 5 more and on Redstone 4 Spring Update less.

DONA had a tweet a couple hours ago, answering a question with regards to some specifics and while typically vague it suggests that maybe we might have some information tomorrow. 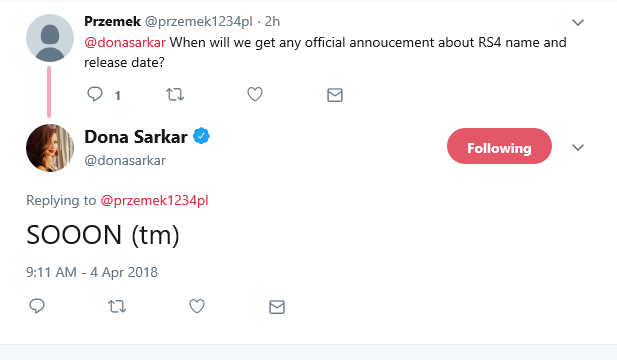 Frankly, I was expecting something yesterday or today and it's been a bit disappointing and aggravating to say the least.
With update Tuesday only 6 days away, which, IF you put any faith in rumors is suppose to begin the staged rollout of the RTM it seems all this secret cloak and dagger crap is just STUPID at this point.
I'm beginning to think there is absolutely no value in participating in the INsider Program, unless you enjoy being kept in the dark and fed a bunch of BS.

I will continue waiting. It is a bit too confusing at the moment.

I didn't have the Media Creation Tool in my library of applications. I had to download a new copy last night.
Ad

The only thing I'm seeing today on 1 computer is several updates for Office 2013.

clifford_cooley said:
I will continue waiting. It is a bit too confusing at the moment.
Click to expand...

I just went through the procedure, like Trouble. I now have a 17133.1.180323PRO as Trouble does. I had to do it twice because there was an error generated regarding files not being available. I made sure to close explorer before I ran the command again and it completed without errors.

I would be willing to bet, the folks at Microsoft get a kick out of trying to fool those wanting to call the final build version.... It can be sort of interesting


Trouble said:
I'm beginning to think there is absolutely no value in participating in the INsider Program, unless you enjoy being kept in the dark and fed a bunch of BS.
Click to expand...

Probably why I got out of the program after the initial release.
Last edited: Apr 4, 2018

What is really going to tick me off is if we don't get an actual build release but instead ....
Tuesday we get a cumulative update, that flips a couple switches and rewrites a few registry keys and we find that we've been sitting on the RTM all along.

I find that recently I'm missing Gabe Aul more and more.
He seemed to delight it teasing builds even to the point of occasionally commenting on leaked builds.
Dona seems to see her role as a general, world traveling Microsoft Ambassador, promoting various MS Events around the Globe, with less focus on we the actual participants grinding out these builds and bugs.

We KNOW the current build is feature locked although we were never told.
We suspect that we are very near the climax of this cycle.
I fail to see the need for all the obfuscation.
It's like no body there wants to be the official definitive source for details on something that we can be reasonable certain is only days away.

I am still seeing some strange problems in this build. It might be due to the Mixed Reality, but windows will not close from the taskbar using the small popup window. I still have problems with websites not scrolling unless I change the Zoom.

But so far, they are just minor items. It really would not do any good to install the .iso we have on a system right now? If the build was replaced, it might leave some remnants which could do harm?

I did not like Gabe because he never communicated with the group. I had the impression Dona was better. But this build is not technically in the Insider house any more...

And don't forget, tomorrow is Update Thursday .... or was it Friday ...

clifford_cooley said:
I didn't have the Media Creation Tool in my library of applications. I had to download a new copy last night.
Click to expand...

That is probably why it was 1709, the public version has not been made available, as far as I know. The one we just downloaded came from a different place.
Last edited: Apr 4, 2018
Ad

Strange happenings. I repaired and updated my daughters Laptop yesterday to 1709.16299.334. Home version. When I Checked for updates today, In the history, I see Windows successfully downloaded "Feature Update to Windows 10 version 1709 4/4/2018.

Like many here I don't understand what MS are up to?

the current MCT is that one for the 16299. It is easy to find out which version the MCT is: Look in the properties. The current version shows as File version 10.0.16299.15 .
The post that I made here: https://www.windows10forums.com/threads/spring-creators-upgrade-for-download-available-but-only-in-esd-files.16573/
is based on a report on a German website Winfuture.de which is based on a report from twitter:
https://twitter.com/h0x0d/status/980965403349336064

This is where I got some info... The title of the Media Creator page still shows FALL Creator's Update.

I just took the plunge. I will either be way ahead of everyone else or I will be rolling back this build. I used the .iso made as describes online. Version shows, as you would expect, 17133.1. I will be watching for updates to increase the version.

The install went OK. I used a DVD which seemed to take a long time to transfer the files to the system. The Windows Insider setting on Updates, which this machine is not involved with, did not show any of the Insiders verbiage.

It shows as Activated, but if there is anything else anyone might want me to check, let me know. 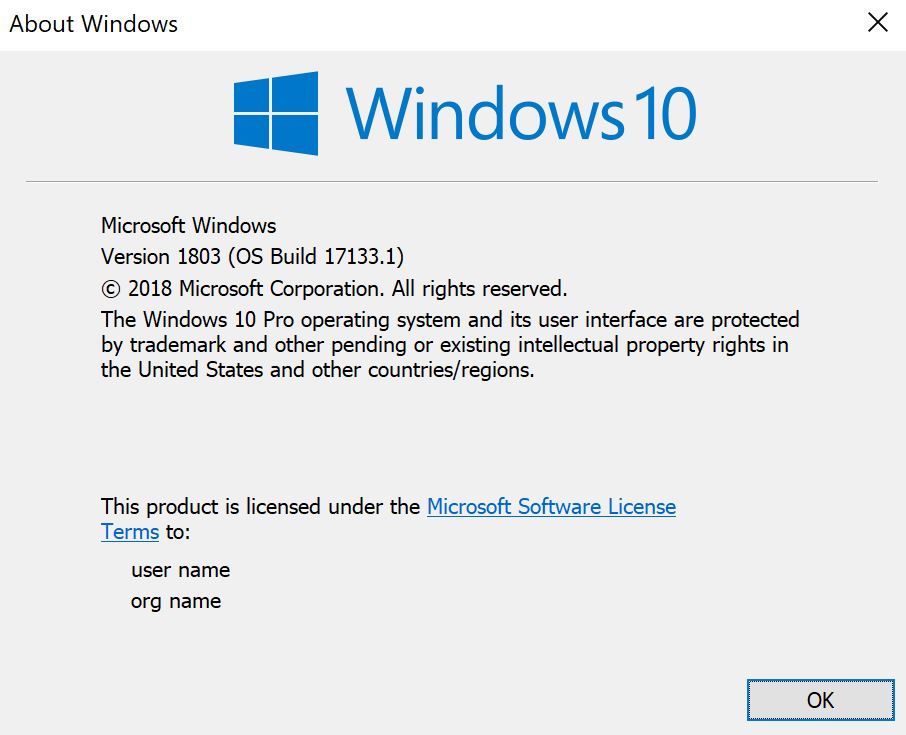 Are you saying the final build which will be released to the public next week, maybe, is already available and not a Insider's Preview build?
Click to expand...

I Think that the day they release 1803 MCT will also have the 1803 ISO, this has happened for the last couple of upgrades 1703 was actually on the MCT a week before release If I remember right and 1709 announce that Fall Creator update included. that statement remains at the top of the page now and when 1803 is released it will be included in the MCT ISO
Ad

Well I have Pro on all my computers so I can just block all updates until SCU is released then download it from Catalog I have more confidence in the download from the Catalog than WU
You must log in or register to reply here.