SOLVED Strange black squares instead of text in Printer menu ?

Got it after the 1903 upgrade. I have no clue how to fix it... I have run the sfc /scannow and it actually founds errors (which were corrected). I have also tred to change font and text size to no avail. 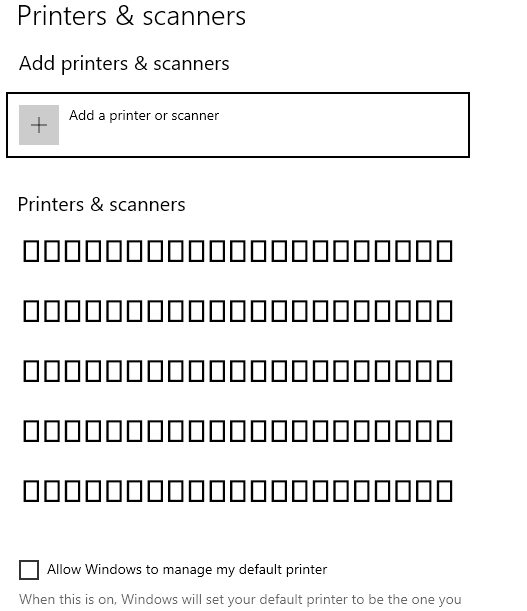 What I would start with in Printers and Scanners is removing the device followed by uninstalling all the software/programs associated with the printer. Then, if not having the disc for use on the current version of Windows, go to the printer manufacturer's site and download then install the printer. May need it disconnected from the computer until prompted to plug it in. The various makers have different procedures.

Also check for software and P&S entries for printers you may have had but no longer, delete anything found. I had one once where the client thought an old printer was gone but the install found parts of it left and tried re-installing that instead of the new one.

I haven't heard of this problem with 1903, BUT....
It was a known issue with some recent insider builds.

[Added] Text on Devices pages in Settings for “Bluetooth and Other Devices” and “Printers and Scanners” isn’t rendering correctly
Click to expand...

Trouble said:
I haven't heard of this problem with 1903, BUT....
It was a known issue with some recent insider builds.

I am indeed running Insider Build. I will check for updates and maybe return to standard version of win10 if not solved. Thx all for your input so far.

Moved to the Insider sub-forum.
IF you would rather remain in the Insider Program, this issue was addressed in the more recent Fast Ring builds.
Ad

Trouble said:
Moved to the Insider sub-forum.
IF you would rather remain in the Insider Program, this issue was addressed in the more recent Fast Ring builds.
Click to expand...