SOLVED Anyone seen the new build upgrade (1809) yet?

I was wondering if anyone has seen the new build offered on Windows update. The Microsoft site seems to be pre-loading threads about subjects such as "why don't I see it" or "what are the system requirements". Since these threads are being posted and responded to by a Moderator, it does seem to suggest the release is imminent.

Actually 1809 will be a Version Upgrade, be prepared for a number of changes and have seen published warnings to protect your data against possible issues, anything that exists nowhere else and can't be recreated easily. It probably will start showing up soon but due to Server capacity like previous Upgrades not be available to everyone at the same time.

Nope nothing yet.
Even if today is actually the day, I wouldn't expect anything until around noon Central time.

Nothing here in Germany either.

I am expecting a final Redstone 5 Insider build any day now which will effectively be 1809. This to give some of us a chance to turn off the Insider thing rather than suddenly getting a 1/2 complete build of next springs release.

I'd be pleased, but ultimately very surprised if we received another build at this late date.
I suspect we already have what they are going to release as a final build on our insider computers now.
I would hope that they would at the very least, release a cumulative update to fix the two remaining issues with Task Manager, although they may release the RTM and then immediately release a Cumulative Update for that instead.
Ad

Everything went OK so far. About 47 minutes including download and restart back to desktop.

Been busy all day.
Finally got around to checking back.
Downloading and installing the update while simultaneously using the media creation tool to grab the combo 32 / 64 bit ISO.
Regardless of how the upgrade goes, at some point tomorrow I'll do a full backup and then wipe and clean install this new version.
Good luck to everyone

Me too, but I have yet to finish the install. Fingers crossed.
Ad

Well that was fun.
Went through the whole process and after two restarts I see this.... 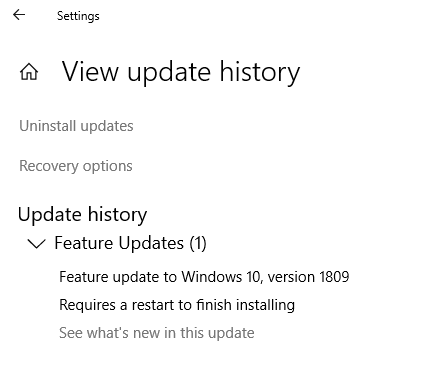 Now it's starting the download process again.
Time to shut down and do my clean install tomorrow.

That's not good. I hope mine goes better. I don't have time this week to mess with it. 25 minutes in so far, fingers crossed.

It took about an hour and three reboots to complete. All seems well. The only issues I had was it reset a couple of my privacy settings (seems to happen after every major update), and my color profile was reset (easy to fix).
D

Downloaded and installed on my three domestic computers. No apparent problems - yet! A notive that snipping tool is "moving to a new home" and that I should try the new snip and sketch.

I am anticipating you will all have a better experience than me. On my VERY slow copper wire internet, the process from start to full install took about four hours. No sweat really, I left two running overnight, so they just needed the reboot and install.

Of my 5 systems, the 3 laptops installed normally.

One Desktop has never seen the update and the other saw the update and started downloading but did not complete the download. Now, when I check for updates that update no longer shows up.

Maybe it needs some time between tries..
Ad

Haven't received it yet here via WU.. no rush.
Curious to know, does this update/build wipe all of the preexisting system restore points as with many of the others?
Of course I'm only referring to updates not clean installs.

Bif said:
Curious to know, does this update/build wipe all of the preexisting system restore points as with many of the others?
Click to expand...

I think it is fairly standard for restore points to be removed since you can only go back to a previous build by rolling back the upgrade.

It will also remove references to prior updates for the previous build.
Ad

It does leave the "Windows Old" folder, so you still have an option.
Maybe this thread could be merged with the other thread here?::