SOLVED Several updates on 5/14/19 but not Build upgrade..

Maybe it will come later today and these updates are preparatory , but so far, no build upgrade
Ad 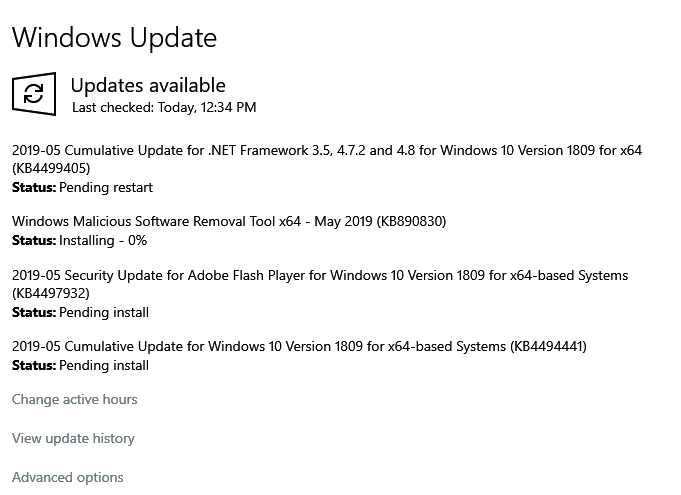 Did get a build bump from .475 to .503 but it looks like mostly security concerns were addressed.

It did include a Servicing Stack update as well 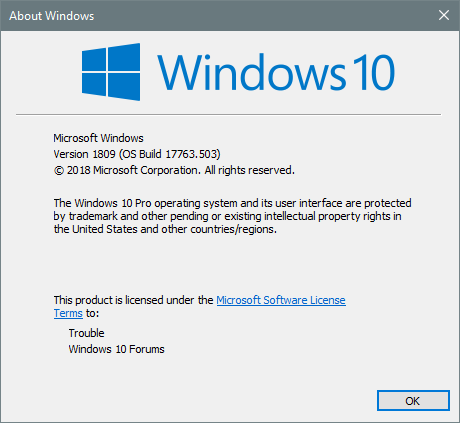 The CU has installed twice on two of my machines. It even has a (2) after it..

Same here. Same "2" following the info in Update History.
No info as to it having failed and a second attempt was made. It was just there again to be installed when I rechecked manually after the initial reboot following the first round of those noted above.

I don't think it failed since it happened on all 5 machines. The first time it tries, it only installing for about 3 seconds then goes to a reboot message. It would seem, it does what it needs to do but waits for the other components to be installed first.
Ad

The folks on the Microsoft Insider site are going crazy passing around a link to give feedback about the double install...

Does it seem strange the preview ring would get the same type of update or just something expected prior to the actual build release?

Saltgrass said:
Does it seem strange the preview ring would get the same type of update
Click to expand...

As I suggested above, I think it was principally a security update, so.....
To the extent that the Release Preview Ring, or any other iteration might be susceptible to the same security flaws, I would expect something similar. However because they are not the same version (they're all 1903 or higher) I would expect the KB number to be different..... say something like KB4497936
Last edited: May 14, 2019

I think they are different numbers and maybe something like 450xxxx but you do have a preview system, right? You are the one who noticed the servicing stack...

What I am looking at is, in the past, a failed update stated such and then installed again with a separate entry. This is too much of a coincidence both versions are getting the (2) designations. One poster is even suggesting the Servicing Stack should have been installed first but actually, it was.

Yep both the current public version of Windows 10 and the current Release Preview Ring required two tries to get the update installed.
Interestingly I paid a bit more attention to my Release Preview Ring machine install and it did one of the old style auto reboots at approximately 30% during the install. It might have been then that it noticed that it needed the Service Stack installed and in-place before installing the actual cumulative update..... IDK.

Even more interestingly (to me) nothing for my Fast Ring machine. I would have thought that it would have been a global update, touching all current versions and builds.

Trouble said:
Same here. Same "2" following the info in Update History.
No info as to it having failed and a second attempt was made. It was just there again to be installed when I rechecked manually after the initial reboot following the first round of those noted above.
Click to expand...

Same here too. I did not get the Servicing stack update.
Ad

That's odd. One of my PC's requires installing it twice, the other doesn't. Although both showing different build numbers. 17763.503 on the one that only updated once, 17763.475 on the one requiring a 2nd install.

After the 2nd install this one is up to 17763.503, so obviously the first install failed, even though it didn't report as failing.

I don't know if it makes sense, but, in the history it is correctly, as usual, listed as a cumulative update. In the programs and features section, it is listed as a security update. Maybe intentional?

Later
Just updated another two computers. IMO, it was a deliberate action. The second 2cumulative " update took but seconds to download, but a longer than usual install. At that time, there was nothing showing under programs and features. After the restart, it appeared as a security update.
Last edited: May 15, 2019

BigFeet said:
After the 2nd install this one is up to 17763.503, so obviously the first install failed, even though it didn't report as failing.
Click to expand...

For all the non-belivers regarding the operation of this CU, from the description site for KB4494441, it shows the following.

Some customers report that KB4494441 installed twice on their device.

This update includes quality improvements. Key changes include:
If you installed earlier updates, only the new fixes contained in this package will be downloaded and installed on your device.
Click to expand...

SOURCE: https://support.microsoft.com/es-es/help/4505056/windows-10-update-kb4505056
Seems to have an extremely narrow focus, but.....
The release is dated today, which is Sunday a very rare (I can't remember any) release day, so....
I suspect there may be more to it than what they are suggesting.

New CU today and the Media Creation tool for 1903 seems to be available, downloading now to make sure.

I have not yet seen the new build available through Windows Update.
Ad