I have a new laptop with a clean install of Win 10 Pro that I have joined to a Windows Server 2003 domain and it appears in AD on the server. I can logon as a local user no problem, but when I try to log onto the domain using any of the domain profiles (admin or user) I get "user name or password is incorrect. Try again." The user names & passwords are all good so I assume that for some reason authentication is not available. I have verified that the DNS address is correct and I can ping the server by address & by NetBIOS name. I am stumped by this one. I have multiple Win 10 Pro machines that log in without any issues and I've not seen anything like this before.

Can anyone offer any advice on where to look for a solution?

Thanks in advance.
Ad

I ask this as pretty sure Cumulative Update KB3176495 addressed some of the issues you are describing. That was released August 9, 2016 - It may have been the Cumulative Update prior to that though - but you can check on Microsoft's Update History.
Q

Thanks for the welcome and quick response. Yes, Version 1607 Build 14393.105. I'm running the same build on my workstation without issue.

Here is a bit more background. I purchased this laptop with Win 10 Home and upgraded to Pro with an ISO downloaded directly from MS.

Here are the related updates showing in update history:

When double clicked the Update Installer started and then came back with this error.

Here is a screen capture of the PC properties that I used to verify that I have the correct update. 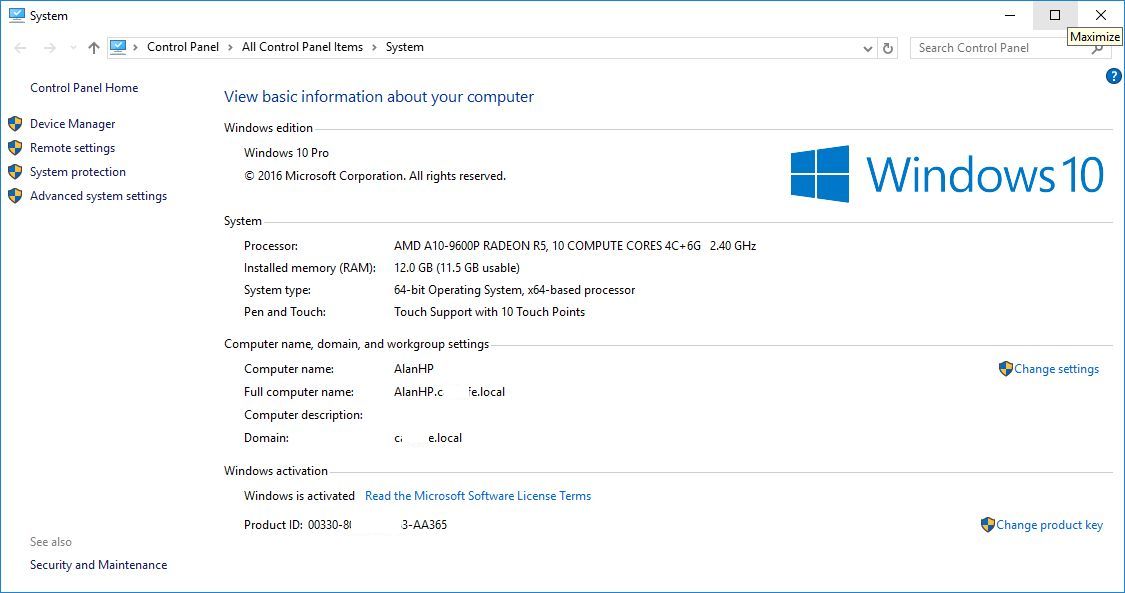 Can you see any problem with what I have done? I tried the install several times and got the same result.

FYI: I just found a post by someone with precisely the same problem as mine:
Unable to login to domain accounts. "The user name or password is incorrect."
Discussion in 'Windows 10 Support' started by Jason Robins, Aug 19, 2016.

His solution was to re-install Windoze while connected via Ethernet. Since I was connected by Wi-Fi on the first install I am going to re-install on Ethernet and see if that works. It sounds ridiculous, but then I must never underestimate how ridiculous Windoze can be.
Q

IS the problem machined pointed at your domain DNS server for name resolution?
You can't even log on to the machine as the Domain Admin?
Q

Yes is the answer to both your questions. I just re-installed win 10 and got the same result.
Ad

I have done exactly that 2 or 3 times over the last 2 days. Same problem every time. There is something odd that I have noticed in this ongoing problem. Even though I am logged onto the laptop as a local user (COMPUTERNAME\Alan) I am able to browse shared folders that are restricted to that user name on the domain (DOMAINNAME\Alan). That leads me to believe that logging in locally is giving me domain rights, which is totally bizzare, is it not?

Not necessarily.....
IF you are using the same "UserName" and "PassWord" locally which matches exactly the username and password of the domain user, then Windows pass-through authentication will pretty much take care of the rest.
One of the reasons you can sort of use a home version of Windows on a Domain, even though it can not officially join or have an actual "Computer Account" on the domain, generally you can get away with shares because of the matching user name and password.
My interest is.....
What user name and password are you using when prompted, when you join the computer to the domain?
Have you tried using fully qualified domain account logon to see if that makes any difference
(e-mail address removed)
with the associated password?
Does that seem to make any difference or does that also give the same error?
Q

I just did the following for a 3rd or 4th time:
- moved laptop from domain to workgroup (AD then shows device with red X through it)
- deleted device from AD
- put laptop back on domain (AD shows device as normal)
- logon dialog shows local username
- selected "other user" and logon dialog shows "Sign in to: DOMAIN"
- provide domain username and password (that I know are correct) and I get error "The user name or password is incorrect. Try again."

To specifically answer your questions, there were no problems, messages (other than the normal welcome to domain & reboot required) or authentication issues.

I have been going around and around with this to the point where I am reminded of the definition of insanity; doing the same thing over & over and expecting a different result. I just have no where else to go. Did I mention that this is the company President's new laptop and I'm getting voicemail asking about an ETA?

It doesn't happen to have some trial version of some third party software security suite installed that might be causing the problem does it?
I assume you have other Windows 10 computers that can authenticate to the 2k3 domain controller without issue?
Ad

Thanks Trouble, for your detailed response. Yes, the username and password are the same for both local & domain. I am very tempted to simply set up the laptop with his local login and let pass-though do the rest. I just know that it will come back to haunt me, somehow.

The only prompt was for a user (admin) to authorize joining the domain. Everything in the process appears normal until I try to log onto the domain.

Yes, I have used (e-mail address removed) with the same result.

I am totally stumped on this one.
Q

This install was done from an ISO downloaded from MS. There is no bloatware of any kind, beside MS's usual.

Yes, there are 8-10 Win 10 PC's & laptops using this domain. The kicker is that we are 2 weeks away from gutting the server room and installing 4 new servers. Once the 2003 servers are gone I expect that I can get that laptop to play nicely with Server 2012 R2.

Quattroped said:
This install was done from an ISO downloaded from MS.
Click to expand...

At the time of the install, did you perform a custom clean install or did you simply upgrade from Home to Pro.
The reason I ask, is because the only thing that I can think of is that there are some local policies impacting registry entries left over from the Home version that might be causing the issue.
Were any of the other Windows 10 computers on the domain upgraded similarly from Home version to Pro?
Q

The laptop came with Home OEM and as such would not upgrade to Pro. I installed Home from an ISO as a clean install. I even formatted the HD before each install, just to be sure. Then I upgraded by changing the key from within windows.

All of the win 10 machines on the domain were upgraded from 7 pro or 8.1 pro before the end of July deadline. This is the first time I have actually installed 10 pro. You may be on to something there because this is the only one to upgrade win 10 from home to pro. I have done it before on win 7 and 8.1, but not 10.

IDK..... it was just a shot in the dark.
I think what you did was what we used to call a Windows Anytime Upgrade, by using the Pro product key it basically flips a switch and enables features for Pro that were not present in Home.
What I don't know is if it sorts out all the granular registry entries that would apply to Domain joined computers and the associated Group Policies regarding interactive log-on and deny / allow log on locally.
Ad

Now I have another issue. When installing I created a local account using my own name. It is working fine, but I am not able to create another user (the President won't want to log in as me). I go in to Manage User Accounts and try to add him as a local user/admin and I get an error "The user account alanhp\alan does not exist. Check name & domain & try again." It will allow me to add him as a domain account when I provide an admin name & password and use "check names". It finds him on the domain and allows me to add him as a local admin, but I still can't login as him. Weird!

I am going to have to re-install AGAIN!!! and add him as the local user up front to even get him a working profile. This is incredibly stupid. I wonder if there is an ISO I can download that installs pro directly and will work with the key I have purchased.

for the ISO you need go here

The local user management console does not work. It says "this snapin may not be used with this version of windows." The other method worked. Thanks.

That ISO is what I used. It installed home & I had to upgrade with the key I bought.

Thanks for all your help. I just don't have any more time to spend on this. Tomorrow we poke the holes in the concrete walls of the server room to install the A/C for the new servers. I will set him up as best I can for now and work on it again later.